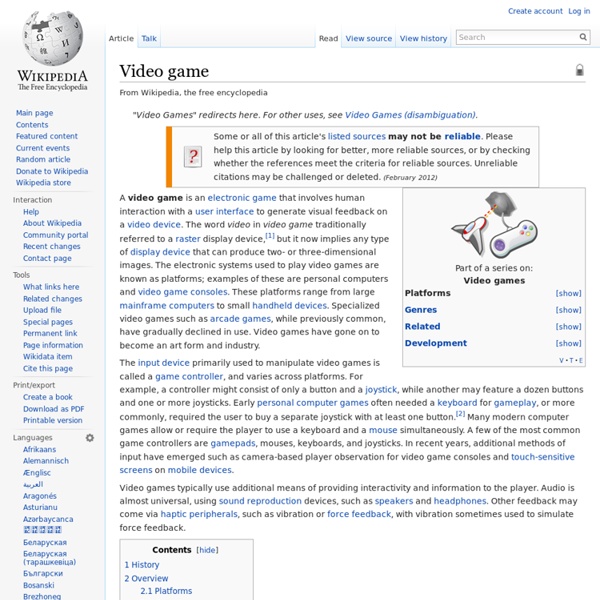 A video game is an electronic game that involves human interaction with a user interface to generate visual feedback on a video device. The word video in video game traditionally referred to a raster display device,[1] but it now implies any type of display device that can produce two- or three-dimensional images. The electronic systems used to play video games are known as platforms; examples of these are personal computers and video game consoles. Video games typically use additional means of providing interactivity and information to the player. History Early games used interactive electronic devices with various display formats. Inspired by radar display tech, it consisted of an analog device that allowed a user to control a vector-drawn dot on the screen to simulate a missile being fired at targets, which were drawings fixed to the screen.[4] Other early examples include: Overview Platforms Genres Classifications Casual games Main article: Casual game Serious games Educational games Cheating

Assassin's Creed III "On this land, I am torn. Part of me wants to fight and repel all outsiders. The other part of me is the outsider. In the name of liberty, I will fight the enemy regardless of their allegiance. ―Ratonhnhaké:ton, Assassin's Creed III Gameplay Trailer. Developer(s) Ubisoft Montreal US release 30 October 2012 (360, PS3)18 November 2012 (Wii U)20 November 2012 (PC) EU release 31 October 2012 (360, PS3)23 November 2012 (PC)30 November 2012 (Wii U) Genre: Historic Action-Adventure Game modes: Single-player, Multiplayer Platform(s): Xbox 360, PS3, PC, Wii U Media: DVD, Blu-ray Disc, Digital Download Assassin's Creed III is a 2012 sandbox style action-adventure video game that is developed by Ubisoft Montreal and published by Ubisoft. On 28 February 2013, Ubisoft announced the game's sequel, titled Assassin's Creed IV: Black Flag. Development In this vein, during winter, thick snow causes people to move slower and stumble about in the drifts. Art direction Gameplay Combat Memories Other Season Pass Synopsis Plot

part 1 #3 Tamagotchi effect The Tamagotchi effect is a term that refers to the development of emotional attachment with machines or robots or even software agents. It has been noticed that humans tend to attach emotionally to things which otherwise do not have any emotions. For example, there are instances when people feel emotional about using their car keys, or with virtual pets. It is more visible in fields which show parts of human behavior e.g. area of artificial intelligence and automated knowledge processing. Tamagotchi Toy[edit] The Japanese toy, the Tamagotchi was released in 1996. Reasons[edit] Researchers have tried to explain the Tamagotchi effect. Who is affected? The tamagotchi effect has no limitations on who or who can't encounter the effect. Children's perspective[edit] "In the 1960s through the 1980s, researchers in artificial intelligence took part in what we might call the classical "great AI debates" where the central question was whether machines could be "really" intelligent. Advantages[edit]

The Pros and Cons of Technology Implementation in Schools - ZamboTimes It is hard to deny the impact of modern technology in our lives. Technology has made things happen which we would have thought to be not possible decades ago. Technology has made life far more convenient for many of us. These days majority of the people and businesses are largely dependent on computers and unable to function effectively without it. Probably one of the most well known benefit of technology at school is that it provides a great wealth of knowledge to the students. Computers help students to learn through exploration. But the presence of modern technology in our educational system is not without its disadvantages. Social economic status may also prevent some students to enjoy the benefits of technology that is offered at school. So the implementation of technology in the educational system has its ups and downs. Published At: Isnare.com Free Articles Directory - Link:

part 1 #1 Persuasive Games "Bogost creates and writes about serious games, seemingly simple diversions that deliver educational political and advertising content alongside entertainment. In Persuasive Games, he offers an academic but accessible introduction to their potential, and it is very meaty reading for anybody interested in where the interactive arts meet real-world topics.", Scott Colbourne, The Globe and The Mail "Bogost's book provides a new lens—procedural rhetoric—to use in the analysis of games and an excellent survey of the history of games of this ilk." , Steve Jacobs, American Journal of Play “Do not wait: start reading this stimulating book.” , Jan H.G. "Whether we call them ‘serious games’, ‘persuasive games’, or simply ‘video games’, it is clear that there is much of rhetorical significance to mine from the electronic representations and interactions that have captivated such a large portion of the world’s population.

Call of Duty: Black Ops II Call of Duty: Black Ops II is a 2012 first-person shooter video game, developed by Treyarch and published by Activision (Square Enix for Japan). It was released on November 13, 2012 for PlayStation 3, Xbox 360, and Microsoft Windows and on November 18, 2012 in North America, November 30, 2012 in Europe and Australia for the Wii U.[5][6][7] Square Enix released the game for the Japanese market on November 22, 2012 as a subbed version. A Japanese voice-dubbed version was released separately on December 20, 2012. The Japanese release of the Wii U port is only the dubbed version since the console was not available in Japan in November.[9] Black Ops II is the ninth game in the Call of Duty franchise of video games and a sequel to the 2010 game Call of Duty: Black Ops. The game was launched at 16,000 stores worldwide at midnight on November 13, 2012.[10] The game is the first in the series to feature significant elements of nonlinear gameplay, most notably multiple endings.[16] Synopsis[edit]