7 Secrets of the Super Organized 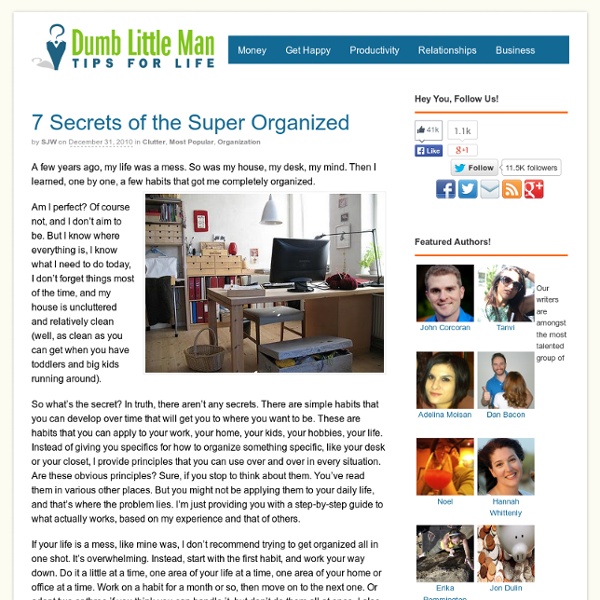 A few years ago, my life was a mess. So was my house, my desk, my mind. Then I learned, one by one, a few habits that got me completely organized. Am I perfect? Of course not, and I don’t aim to be. But I know where everything is, I know what I need to do today, I don’t forget things most of the time, and my house is uncluttered and relatively clean (well, as clean as you can get when you have toddlers and big kids running around). So what’s the secret? Are these obvious principles? If your life is a mess, like mine was, I don’t recommend trying to get organized all in one shot. So here are the 7 habits: Reduce before organizing. If you take your closet full of 100 things and throw out all but the 10 things you love and use, now you don’t need a fancy closet organizer. How to reduce: take everything out of a closet or drawer or other container (including your schedule), clean it out, and only put back those items you truly love and really use on a regular basis.

Obsessive- Compulsive’s Guide To 12 Organizing Tips By Leo Babauta Is your life in disarray? Do you have trouble finding things? Do you constantly forget stuff? If so, don’t worry — you’re like most of the human population. Disorganization is a natural state of order. Education Technology - theory and practice: Pearltrees for teachers Year 2012 last post is a guest post from Finnish teacher Tommi Viljakainen. He is a teacher in Elimäki lower and upper secondary school. He teaches English, French and P.E. He is also interested in social media, iPad and the future of education. You can find Tommi also in Twitter under name @tommiviljaA (Finnish) teacher's dive into social media - "I discovered pearls in Pearltrees!"

10 Ways History’s Finest Kept Their Focus at Work Post written by Albert van Zyl from the blog HeadSpace. The lives of great people give us interesting clues about how to organise our days. All of them attached great value to their daily routines. This is because they saw it as being part of ‘becoming who they are’, as Nietzsche puts it.

13 Things to Avoid When Changing Habits “Habit is habit, and not to be flung out of the window by any man, but coaxed downstairs a step at a time.” - Mark Twain Post written by Leo Babauta. Follow me on Twitter. I’ve learned a lot about changing habits in the last 2 1/2 years, from quitting smoking to taking up running and GTD and vegetarianism and waking early and all that. I could go on, of course, but you get the picture. I’ve not only learned a lot about what you should do when changing habits, but through my failures, I’ve learned about what not to do.

5 Steps for Taking on Something New It’s a scenario most solo web professionals find themselves in now and then: You have the opportunity to work on a project that includes something you haven’t done before, and that something is pretty big. Maybe it’s editing video for the web, conducting user-testing, or creating a mobile web design. Whatever it is, it seems to be a capability worth adding to your repertoire. But how do you know if it’s the right move?

HOW To Organize Your Files – Mission: Office - Organize With Sandy February 15, 2011 by Sandy I did a post on organizing your files in a general sense. But I wanted to go a little deeper with you. Blog Archive » The Web’s third frontier Everyone realizes that the web is entering a new phase in its development. One indication of this transition is the proliferation of attempts to explain the changes that are occurring. Functional explanations emphasize the real time web, collaborative systems and location-based services. Technical explanations argue that the interconnectivity of data is the most significant current development. They consider the web’s new frontiers to be closely related to the semantic web or the “web of things”.

Increase your productivity at work by letting go of negative men My alma mater is currently ranked number one in all of the college men’s basketball rankings. They’ve been in the top spot for 11 of the 14 weeks of the polls, and were number one in the preseason. There are five games left in the regular season, and all of the teams Kansas has left to play would love to see the Jayhawks lose. Colorado, Oklahoma, Oklahoma State, Kansas State, and Missouri fans aren’t the only ones who want to see Kansas mess up their record in the last five games. Fans of the other ranked teams would be happy to see Kansas take a tumble, and, after watching some of the games this year, I’m pretty certain there are a few referees that would be glad to see Kansas lose, too.

and he IS right about everything,BUT its always the little things i HATE to do. by rabboud Apr 18

i have always SOMETHING messed up. by rabboud Apr 18