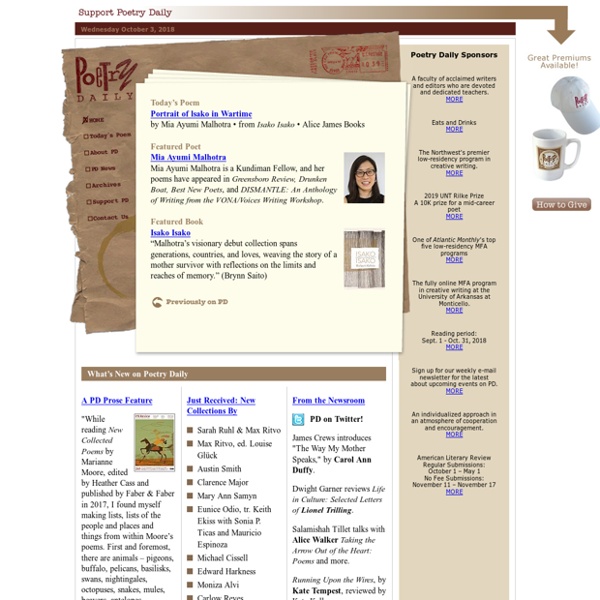 20 Poets on the Meaning of Poetry We’ve been thinking about poet Meena Alexander’s incredible address to the Yale Political Union, in which she refers to Shelley’s 1821 essay, A Defence of Poetry. The English poet’s work famously stated, “Poets are the unacknowledged legislators of the world.” Alexander concludes: “The poem is an invention that exists in spite of history… In a time of violence, the task of poetry is in some way to reconcile us to our world and to allow us a measure of tenderness and grace with which to exist… Poetry’s task is to reconcile us to the world — not to accept it at face value or to assent to things that are wrong, but to reconcile one in a larger sense, to return us in love, the province of the imagination, to the scope of our mortal lives.” Other poets have attempted to interpret “what is deeply felt and is essentially unsayable.” Here are a few brief definitions of poetry by famous poets.

The Jungle Book (1967 film) The Jungle Book is a 1967 American animated film produced by Walt Disney Productions. Inspired by the Rudyard Kipling's book of the same name, it is the 19th animated feature in the Walt Disney Animated Classics series. Directed by Wolfgang Reitherman, it was the last to be produced by Walt Disney, who died during its production. The plot follows Mowgli, a feral child raised in the Indian jungle by wolves, as his friends Bagheera the panther and Baloo the bear try to convince him into leaving the jungle before the evil tiger Shere Khan arrives. The Jungle Book was released on October 18, 1967 to positive reception, with much acclaim to its soundtrack, featuring five songs by the Sherman Brothers and one by Gilkyson, "The Bare Necessities".

Amazing Sky lantern Sky lanterns, also known as Kongming Lantern are airborne paper lanterns traditionally found in some Asian cultures. They are constructed from oiled rice paper on a bamboo frame, and contain a small candle or fuel cell composed of a waxy flammable material. When lit, the flame heats the air inside the lantern, thus lowering its density causing the lantern to rise into the air. The sky lantern is only airborne for as long as the flame stays alight, after which the lantern sinks back to the ground. photo source In ancient China, sky lanterns were strategically used in wars. Poetry Editor & Poetry: 10 Ways to Read a Poem 1. Get comfy and enjoy your first reading. Relax into the experience without trying to analyze anything. 2.

The Poetics of Aristotle, by Aristotle By Aristotle (350 B.C.E) A Translation By S. H. How to Get Your Confidence Back Getting confidence is one thing, getting your confidence back is a substantially different one. You see, people who’ve always lacked confidence in a certain area aren’t familiar with the emotion and they have a hard time grasping the associated behavior. On the other hand, people who had confidence in a certain area at some point but they’ve lost it are familiar with the emotion and the related behavior, they’ve just lost touch with them. What they need is to get those emotions to surface again. This is easier than inventing them from scratch, but it is also different in many ways and it requires a customized approach. Here are my top ideas on how to get your confidence back:

10 Sci Fi and Fantasy Works Every Conservative Should Read The left-wing science fiction writer China Miéville has compiled a list of “50 Sci Fi and Fantasy Works Every Socialist Should Read.” As a longtime reader of speculative and ”weird” fiction and qualified admirer of Miéville’s work, I thought it would be fun to offer a companion list for conservatives. I’m not suggesting that these books express conservative views as such. But they do raise questions for conservatives or develop ideas from which conservatives can learn. Partly for reasons of time and partly because I wanted to avoided overlap, my list is considerably shorter than Miéville’s: just ten works. I’ve also avoided the most obvious choices, such as Lord of the Rings.

20 Words We Owe to William Shakespeare No high school English curriculum is complete without a mandatory dose of William Shakespeare, and no American teenager makes it to graduation without whining about how boring it is to learn about iambic pentameter. As contemporary speakers of the English language, however, they might be interested to learn how much the Bard of Avon had in common with the generations that popularized the acronyms LOL and OMG and reinvented the 1940s slang term “hipster.” Endlessly imaginative and not overly concerned with grammatical convention, Shakespeare’s scripts contain over 2200 never-before-seen words—a diverse collection of loan-words from foreign languages, compound words from existing English terms, nouns turned into verbs, and creatively applied prefixes—many of which have entered into everyday language. Here are 20 examples of words we can thank Shakespeare for.

5 simple ways to increase self-confidence Self-confidence is one of the key personal qualities necessary for success. Here are 5 ways to develop self-confidence, presented in the book The Magic of Thinking Big by David J. Schwartz. Use them in life, and you will certainly become successful. 1. Sit in the front rows