How to To Make Your Food Taste Awesome 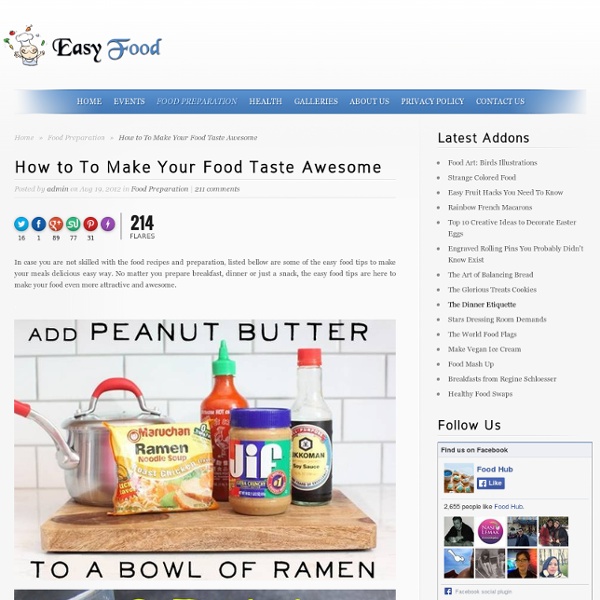 Posted by admin on Aug 19, 2012 in Food Preparation | 211 comments In case you are not skilled with the food recipes and preparation, listed bellow are some of the easy food tips to make your meals delicious easy way. No matter you prepare breakfast, dinner or just a snack, the easy food tips are here to make your food even more attractive and awesome. Idea by Janice Kamide Images Source BuzzFeed

Banana Cake Recipe with Butterscotch and Cream Cheese Frosting We entered the convention center’s ballroom to find two women sitting on the stage. One in her 30′s-40′s, chef jacket attired with a professional’s serene gaze. The other – a bubbly, plump Southern Grandma with short cropped hair, her enthusiasm barely contained. That woman was Shirley O. Corriher and over the next 45 minutes she would become one of my heroes. It was the 2011 IACP conference in Austin, TX and Diane and I had just given a talk on food photography.

Chalkboard Wall Calendar - Martha Stewart Home & Garden Thanks to paint that dries into a chalkboard finish, your board can be whatever size you desire and placed wherever you like. Store-bought formulas come in traditional green and black. But you can also follow our recipe to mix your own batch in any shade. Cleverly applied chalkboard paint means new places to track appointments, keep lists, and leave messages.

DIY Braided Bead Bracelet - Honestly WTF It’s been awhile since our last bracelet DIY. I don’t know about you, but our wrists have been begging for another colorful addition for months now. So after playing with some materials that were already on hand, we’ve created a tutorial for a braided bead bracelet, which is a not so distant cousin of the hex nut and wrap bracelet. Because honestly, you can never have too many . . . You’ll need: Cut the waxed linen cord into a 26″ and 19″ piece.

Kitchen Helpers I found these helpful charts last week and just had to share! Both of these beauties are from Chasing Delicious (aka one of the most fab foodie blogs out there)! Aren’t they faaaaabulous?! Buy them here. (Note: There are lots of little charts like this online, but these are my favorites). I love tea, but I’m no expert. Flat Abs Diet: 7 Low-Fat Dinner Recipes The secret to flat abs? Foods like whole grains, low-fat dairy, and lean protein, which curb hunger, boost your calorie burn, and prevent belly bloat. We've combined these slimming ingredients into a week's worth of delicious dinners. Prep time: 20 minutes Cook time: 25 minutes Makes: 4 servings

Chicken Enchilada Pizza Recipe Chicken Enchilada Pizza And the experiment was….a success! Behold. Two of my favorite foods combined into one fabulous dish — Chicken Enchilada Pizza, baby!!! Yep. Since I crave Mexican food pretty much every day of my life on occasion, I decided to mix things up and convert some of my favorite enchiladas into a pizza! Wind Map An invisible, ancient source of energy surrounds us—energy that powered the first explorations of the world, and that may be a key to the future. This map shows you the delicate tracery of wind flowing over the US. The wind map is a personal art project, not associated with any company.

Style Log In or Sign Up Get the Official App! Literally just became my favorite app, ever! Amazing. All kinds of neat & helpful tips & tricks for everything I am loving this app! So many great ideas! 10 techniques every cook should know Breading This easy, three-step technique ensures an even crumb coating. It's commonly used on thin cuts of chicken, pork or veal that will be fried or baked.

Magic Sauce Recipe I call this the magic sauce recipe. In part, because it makes everything it touches shimmer with deliciousness. It's magic like that. Technically, it's a riff on a chimichurri sauce - one that veered off the rails in a big way. Scottish Farmhouse Eggs Decided to mix things up and do a recipe. This is one I’ve made forever and I’m not 100% positive where I picked it up. It is always a crowd pleaser for brunch or breakfast. Special thank you to Dawnland Mama for the farm fresh duck eggs (even though she is a vegan herself). English Pronunciation If you can pronounce correctly every word in this poem, you will be speaking English better than 90% of the native English speakers in the world. After trying the verses, a Frenchman said he’d prefer six months of hard labour to reading six lines aloud. Dearest creature in creation, Study English pronunciation. I will teach you in my verse Sounds like corpse, corps, horse, and worse.

DIY Chanel Pearl Hairpins This week’s DIY, requested by a reader, was inspired by the abundant and delightful use of pearls in Chanel‘s Spring 2012 Collection. Though I’m usually not the biggest fan of pearls, I actually fell in love with the way Karl affixed them along the back of necks and pushed oversized ones into loose updos. His modern interpretation of the underwater gem just goes to show that pearls can be worn any day, at any age! With a few easy steps, you’ll be able to whip up a handful of pearl hairpins as fast as you can say “Sally sold seashells by the seashore” 10 times. Backwards.