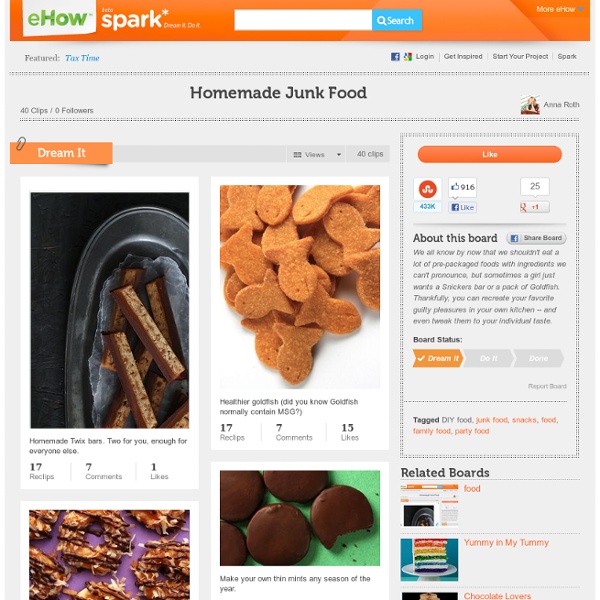 Homemade Twix bars. Two for you, enough for everyone else. 19 Reclips 14 Likes Healthier goldfish (did you know Goldfish normally contain MSG?) 27 Reclips 18 Likes Make your own thin mints any season of the year. 48 Reclips 12 Likes Samoas, another Girl Scout favorite. 24 Reclips 5 Likes Make your own "Snickles" bar. 38 Reclips 4 Likes Healthier Hostess cupcakes. 15 Reclips 2 Likes Pop tarts from your own oven. 4 Reclips 4 Likes When you make your own peanut butter cups, you can add all the peanut butter filling you want. 5 Reclips 5 Likes Homemade Almond Joy. 17 Reclips 4 Likes Smitten Kitchen fills DIY pop tarts with Nutella. 2 Reclips 6 Likes Fig Newtons all grown up. Tater tots. 9 Reclips 3 Likes Break yourself off a piece of that homemade Kit Kat bar. Your homemade Twinkies won't have a longer lifespan than you do. 14 Reclips 2 Likes Passable "Doritos" made from quinoa. 2 Reclips 1 Likes These knockoff Fritos don't have the signature curl, but still have the distinctive salty corn flavor. 1 Reclips 2 Likes

Top 10 Secret Recipes Food The weekend is upon us, and what better way is there to enjoy it than to cook or bake some of your favorite takeout treats? Think of how much money you will save by whipping up these lovely recipes instead of paying out all the big bucks to the fast-food chains. So, here it is: the top 10 secret recipes! 1. McDonald’s Big Mac Kitchen 101: Fruits, Vegetables & Herbs Kitchen 101: Fruits, Vegetables & Herbs I’d be remiss if I simply focused on imparting technical knowledge in the Kitchen 101 series here at Chasing Delicious. I’d be downright neglectful if I didn’t talk about ingredients, particularly the biggest misconception about produce today: that it is naturally available year-round. Though you may be able to find just about every type of fruit, vegetable, and herb in the grocery store every day of the year, a majority of this produce is not in season. If you are buying strawberries in December, you are likely purchasing a fruit that was picked six months ago and stored in a climate controlled facility ever since.

So Very Blessed...: Quinoa Pizza Bites In my opinion, these are, hands down, the best things I think I’ve ever cooked. Each bite is packed with pizza flavor and I can’t get enough of them! I brought someone a few to try and he polished them off in a matter of seconds, immediately asking for “30 more, please.” I love onion (I use frozen chopped onion most of the time, because my eyes so much when I cut fresh onions that I can’t see and cut myself almost every time!), so feel free to cut down the 1 cup if your family isn’t as fond of them! The fresh basil adds a big flavor punch, but the combination of the basil, oregano, paprika, garlic, and onion seemed to meld perfectly to bring all of the pizza flavor in a tiny little bite.

Pepperoni Pizza Puffs Recipe Pepperoni Pizza Puffs Ok – I’ve found a new favorite ingredient at the store. They’ve probably existed for years, and I somehow missed them. But hey — they’re new to me. :) I’m talking about…. Mini-pepperonis!!!! Have you seen these?! How to Make Proper Barbecue Chicken There's a lot of misconception when it comes to "barbecue." The problem is the word itself. It's used as a synonym for grilling, refers to the grill itself, or to the meat being grilled; it also has a sauce named after it; and sometimes it's just the word for the party itself held outdoors in somebody's backyard. What, actually, is "barbecue"?

Crockpot Chicken Tacos I'll keep this short and sweet: this is one of my all time favorite recipes. If there is one crockpot recipe you need in your repertoire, this is it. But truthfully, after making it once you won't even need the recipe because it's just so darn easy. Apple Cinnamon Roll Cupcakes Apple Cinnamon Roll Cupcakes By Stefani Pollack Be sure to leave your kitchen while these apple pecan cinnamon roll cupcakes are baking. When you reenter the room, you’ll get to experience a sensational smell that is so strong you can almost see it cartoonishly wafting from your oven directly to your nose. When the cupcakes are done, quickly drizzle the tops with apple cider glaze. Then, dive into your works of art, making sure to lick the warm, gooey apple cinnamon pecan filling off of your fingers as you go.

McDonalds Menu Items Around The World (Part 2, 32 pics) It’s an incredibly slow Food Network news day, so let’s pass the time until Sandra Lee does something stupid by gawking at McDonalds foods from around the world! Here’s a sampling of menu items that aren’t available in the United States: In Asia, you can pick up an icon sandwich, which is a chicken breast smothered with 2 different kinds of melted cheeses, bacon, and lettuce. This is the shaka-shaka chicken. You choose a powder mixture flavor, dump it into the bag with your chicken patty, seal the bag, and shake it up. Hong Kong just released a fried sweet potato pie in 2010.