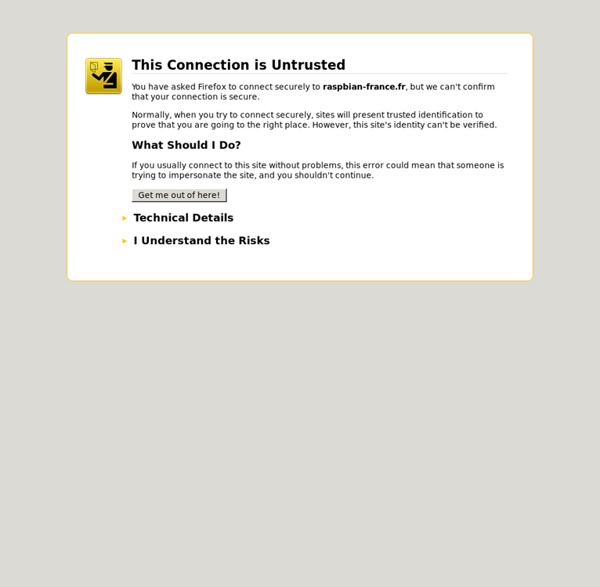 recalbox.com You may want to configure your controller for your new recalbox! If you have a PS3 controller with a bluetooth dongle, just take a micro usb cable, plug the controller into recalbox and wait 10 seconds. You can now unplug the controller and press the HOME button. Your controller is configured! Creating a LAMP server (web server - Linux Apache Mysql PHP) on the Raspberry Pi - Linux tutorial from PenguinTutor This provides details of how to configure a Raspberry Pi as a webserver. This is similar to the guide to using Xubuntu as a LAMP webserver, but adds some of the things that need to be handled differently for the Raspberry Pi. It is termed a LAMP server which is one of the most common configuration for webservers which standard for: Linux – operating system Apache – webserver (http) software Mysql – database server PHP or Perl – programming languages This setup is probably overkill for most uses of the Raspberry Pi, but it is the setup that most users will be familiar with and is a good way to learn about setting up a webserver. I’ll be looking at setting up a lightweight setup in future.

Google 3D Glasses Google 3D Glasses is one of the most hyped and anticipated devices over the past year. OnlineUniversities have written this great article about how Google Glasses they will change education. Education is already seeing some major changes in light of new, cutting-edge technologies. Students can now access educational information from virtually anywhere at any time, and mobile devices are influencing some to flip their classrooms, changing the educational experience altogether.

Raspberry Pi micro arcade machine - End result Well, you've seen the end result at the beginning. Some more pictures: And a movie. You can see it happily running AdvanceMAME: So now, I'm going to totally play old-school games for hours on end... on a tiny 2.4" display... while I have something more powerful in my back pocket... wait, why did I build this again? « Prev 7 HTML5 and The Future of the Web Advertisement Some have embraced it1, some have discarded it2 as too far in the future, and some have abandoned a misused friend3 in favor of an old flame in preparation. Whatever side of the debate you’re on, you’ve most likely heard all the blogging chatter surrounding the “new hotness” that is HTML5. It’s everywhere, it’s coming, and you want to know everything you can before it’s old news. Things like jQuery plugins, formatting techniques, and design trends change very quickly throughout the Web community.