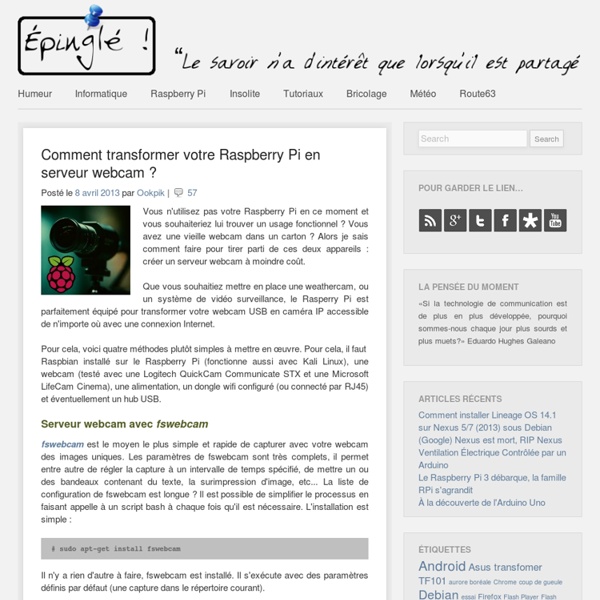 Make Your Own Wireless Printer With A Raspberry Pi Wireless technology is perhaps the best improvement to home printing for years. Fewer cables, flexibility about where you can put your printer – it’s win-win. Unless you have an older printer. While it might be easy enough to buy a new printer for under $50, you might have spent enough on your last one, and be unable to justify the outlay. Additionally, your old printer might have a special function, or manage duplexing in a particularly satisfying way, to bother replacing it. The solution, then, is to make it wireless. Adding a Media Center to the Camper Raspberry Pi For Christmas, I had my wife give me a couple of Raspberry Pi computers. For those that don’t know, this is a computer on a board about the size of a credit card. This is not a high-end computer, but it is silent, generates very little heat and is build with a processor that is optimized for video. These things make it perfect for a Media Center PC and since it uses about 4 watts of power, costs $35 and can run off of DC voltage, it seemed destined to be put in my camper. If I had a DC television, this media center would run just fine on the battery.

Build a Wi-Fi Drone Disabler with Raspberry Pi Photo by Mike Senese Please note: The information presented here is for educational purposes. As with all guides covering network and computer security, the techniques should only be performed on devices that you own or have permission to operate on. This tutorial is designed to help users understand the security implications of using unprotected wireless communications by exploring its use in a popular drone model: the Parrot AR.Drone 2.0. It’s illegal to access computer systems that you don’t own or to damage other people’s property. recalbox.com You may want to configure your controller for your new recalbox ! If you have a PS3 controller and the bluetooth dongle, just take a micro usb cable, plug the controller on the recalbox and wait 10 seconds. You can now unplug the controller and press HOME button.

How To: Raspberry PI Web Cam Server Raspberry PI Web Cam The Raspberry PI is perfectly equipped to turn your USB based web cam into a fully functional IP web cam that you can have lots of fun with, from there you could use tools such as Python to make your project more unique, im having a go at counting passing traffic. If your wanting to something a bit more simple you could just have a web cam that can be access from anywhere with an internet connection, which is what you will end up with at the end of this guide. Your shopping list… Raspberry Pi with an OS installedUSB Powered Hub – Amazon UK – Amazon US Important; This one worked for me, however it’s not worked for others, you will find this is the case with a lot of the powered USB hubs, research before buying.We need a hub because the camera’s draw more power than the Raspberry Pi can actually provide, you see the same with some keyboards and USB dongles.Web CamPS3 Eye Toy – Amazon UK – Amazon USMicrosoft HD – Amazon UK – Amazon US 1.

Raspberry Pi to Arduino Shields Connection Bridge Difficulty Level: Expert - The idea behind the Raspberry Pi to Arduino shields connection bridge is to allow to use any of the shields, boards and modules designed for Arduino in Raspberry Pi. It includes also the possibility of connecting digital and analog sensors, using the same pinout of Arduino but with the power and capabilities of Raspberry. In order to make complete the compatibility we have created the arduPi library which allows to use Raspberry with the same code used in Arduino. To do so, we have implemented conversion functions so that you can control in the same way as in Arduino all the I/O interfaces: i2C, SPI, UART, analog, digital, in Raspberry Pi. Let's summarize what we can do using this shield along with the arduPi library:

Raspberry Pi: Everything You Need To Know My Raspberry Pi arrived with the evening mail—by midnight, my husband and I had turned it into a working print server. And neither of us had any background in computer science. Raspberry Pi is a computer the size of a credit card that’s so simple, anyone can program it. Designed as an introduction to science, technology, engineering, and math for UK grade schoolers, its $35 price tag has made it appealing to hobbyists all over the world.

Raspberry Pi Webcam Over the Internet Using MJPG-Streamer – Jacob Salmela View your Raspberry Pi Webcam from anywhere. Connect to it from a unique domain name and check in on your house or pets while you are away. Materials Local networkMac or PCRaspberry Pi camera module, a Compatible Webcam (or the exact same one I used to write this tutorial)Raspberry Pi running Raspbian “wheezy”Domain nameRouter capable of supporting DynDNS, noip, or other dynamic DNS service; or a software-based dynamic DNS client (not covered in this walkthrough)lighttpd Web server running on the Pi (optional–allows your to embed a stream to a Webpage, which can be password-protected)HDMI Cable (*optional)Keyboard (*optional)Mouse (*optional)Monitor with HDMI input (*optional)*If the Raspberry Pi is set up as a headless machine, you will not need a monitor, keyboard, or mouse–just another computer, which would be used to access it remotely over the network via SSH. Downloads

Google 3D Glasses Google 3D Glasses is one of the most hyped and anticipated devices over the past year. OnlineUniversities have written this great article about how Google Glasses they will change education. Education is already seeing some major changes in light of new, cutting-edge technologies.