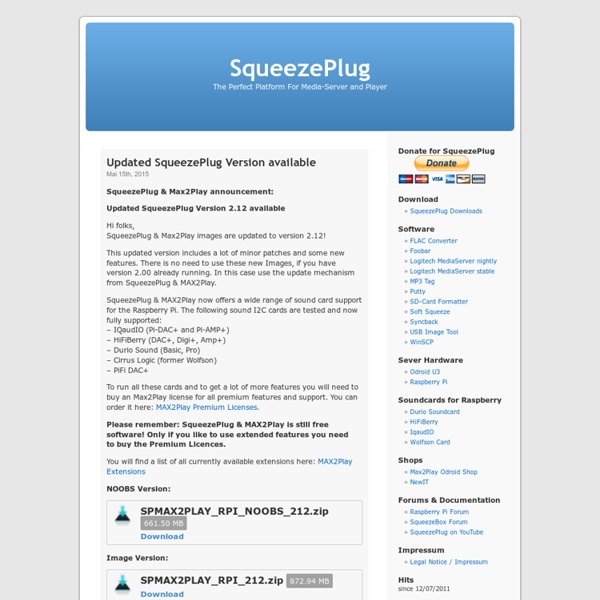 Use Raspberry Pi to stream to any device with SqueezePlug Outside of education, the most popular use of a Raspberry Pi is to play multimedia. For starters, you can use it as a nifty little HTPC with the XBMC media centre. In this tutorial, we'll transform the Raspberry Pi into the ultimate media streaming box. The puny little Raspberry Pi packs enough punch to stream multimedia content all over your house, and to any device. Raspberry Pi operating systems: 5 reviewed and rated Many of us already have a similar setup, perhaps using a NAS and a dedicated low-power machine in the living room. Usually to set up such an environment you'd need an assortment of server software and ninja-level command-line skills. Download SqueezePlug Begin by downloading the latest version of the SqueezePlug image for the Raspberry Pi. Once downloaded, you can check its consistency by verifying its MD5 checksum on Windows with the WinMD5Free tool. Note that since the extracted image is almost 4GB, you'll need an SD card that's at least 8GB. Stream media

Raspberry Pi Voice Recognition Works Like Siri This tutorial demonstrate how to use voice recognition on the Raspberry Pi. By the end of this demonstration, we should have a working application that understand and answers your oral question. This is going to be a simple and easy project because we have a few free API available for all the goals we want to achieve. It basically converts our spoken question into to text, process the query and return the answer, and finally turn the answer from text to speech. speech to textquery processingtext to speechPutting Them Together Result Example: This has been a very popular topic since Raspberry Pi came out. You can use an USB Microphone, but I don’t have one so I am using the built-in Mic on my webcam. Of course, the Raspberry Pi as well. You will also need to have internet connection on your Raspberry Pi. Speech recognition can be achieved in many ways on Linux (so on the Raspberry Pi), but personally I think the easiest way is to use Google voice recognition API. sudo apt-get install ffmpeg .