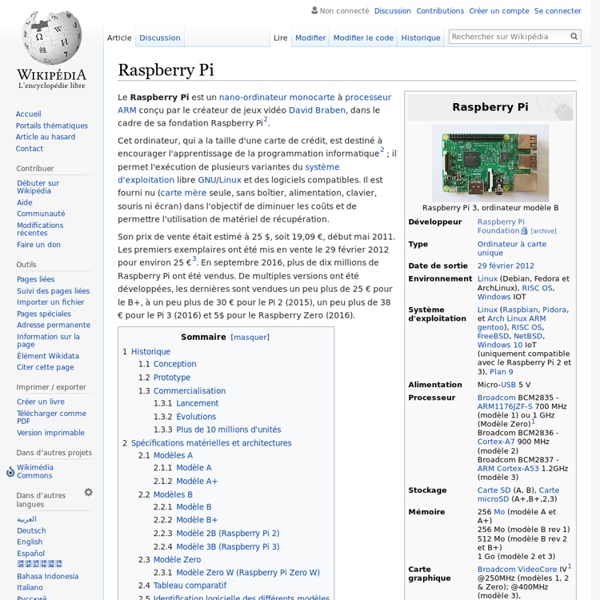 Getting Started Checklist To use the gogoboard, you should have the following things ready. A GoGo Board together with a USB cable. Batteries or power adapter if using motors. Although the gogoboard can be powered via the USB cable, it is not recommended for use with motors, as the USB port provides only limited power.Some sensors and/or motors.Construction materials such as cardboard paper, wood, ice-cream sticks, string, etc.A computer running any recent version of Windows (Windows 2000 and older have not been tested). Connecting to the GoGo Board for the first time Note names, MIDI numbers and frequencies Note names, MIDI numbers and frequencies are related here in tables and via an application that converts them. The musical interval between two notes depends on the ratio of their frequencies. See Frequency and Pitch for more details and an introduction to frequency and pitch. An octave is a ratio of 2:1 and, in equal temperament, an octave comprises 12 equal semitones.

Raspberry Pi's Father Speaks: Eben Upton On The Future of Technology And More It encourages people to be interested in science, technology, engineering and maths. It’s a step education thing, I defy somebody not to be excited by that, I just defy a kid not to be excited by taking pictures from space. Enthusiasm radiates from Eben Upton. By day he’s the Technical Director and ASIC architect for Broadcom. By night, and on weekends, he’s the driving force behind the Raspberry Pi, that small computer that has been revolutionising hobbyist computing and the future of technology itself since its launch in 2012.

Quick start guide What you will need Required SD CardWe recommend an 8GB class 4 SD card – ideally preinstalled with NOOBS. You can buy a card with NOOBS pre-installed, or you can download it for free from our downloads page.Display and connectivity cablesAny HDMI/DVI monitor or TV should work as a display for the Pi . For best results, use one with HDMI input, but other connections are available for older devices. Use a standard Ethernet cable for internet access.Keyboard and mouseAny standard USB keyboard and mouse will work with your Raspberry Pi.Power supplyUse a 5V micro USB power supply to power your Raspberry Pi.

scripting:introduction [Physion] Physion scripting is based on the ECMAScript scripting language, as defined in standard ECMA-262. Microsoft's JScript, and Netscape's JavaScript are also based on the ECMAScript standard. For an overview of ECMAScript, see Qt's ECMAScript reference. With Physion scripting you can do the following: Write regular Javascript code (e.g. variables, loops, conditionals, etc). Music hack of the decade: Panflute Hero! Jhonny Göransson was part of the team that made what’s simply the daftest and most wonderful music hack we’ve seen so far. The moment he tweeted about it last night, we knew we had to show it to you as soon as we could. It’s called Panflute Hero.

What You Need to Know About Getting Started with Raspberry Pi The Raspberry Pi computer is the latest in a line of compact, multi-function devices, shipped as a barebones package so that end users can use the hardware for virtually any computing project that comes to mind. For instance, the device – designed originally to aid school children learn programming skills – is ideal for media streaming, or using as the key element in a MAME gaming unit. However, getting started with the Raspberry Pi can be a little intimidating, partially due to the lack of things to plug into it and the fact that once you open the box, the device is sat there, plain as day, without any clothes on. More to the point, it ships without an OS. This case-less device shouldn’t scare anyone, however.

RPi Buying Guide Back to the Hub Getting Started: Buying Guide - for advice on buying the Raspberry Pi. SD Card Setup - for information on how to prepare the SD Card used to boot your Raspberry Pi. scripting:tutorials:hello_world [Physion] Introduction This the classic “Hello World” example. Create a new file (or scene if you prefer) MagPi issue 25 – out now! For your weekend reading pleasure, here’s issue 25 of the MagPi! Published just yesterday, the latest issue of everyone’s favourite free, monthly, community-produced Raspberry Pi magazine is as full of fantastic stuff as ever. Click to read The MagPi! The cover story is one that’ll definitely get some attention in our house this weekend: it’s a full Python simulation of the Pocket Enigma Cipher Machine, a cleverly devised toy that demonstrates some of the principles of a real Enigma machine like the one many of you will recognise in the cover photo.

The Top 5 Amazing Uses For Your Raspberry Pi Computer I’ve recently received my Raspberry Pi after a long wait – and I’ve got quite a few plans for it. The problem is, I’m not totally sure which project I want to attempt first. While the idea of a carputer is a compelling one, my mobile phone and GPS unit seem to fulfill this purpose already. Raspberry Pi Update: 14th May, 2013 wiringPi version 2 has been released and now has its own website ( to look after it. Most of the documentation on the projects site has been copied over to it the new site, but there may still be 1 or 2 pages that are still missing. I’d encourage you to use the new site if possible where there will be a forum and wiki (when I get time to implement them!) WiringPi is an Arduino wiring-like library written in C and released under the GNU LGPLv3 license which is usable from C and C++ and many other languages with suitable wrappers (See below) You may be familiar with the Arduino… Briefly; Arduino is really two things; one is a hardware platform, the other software, and part of the software is a package called Wiring.