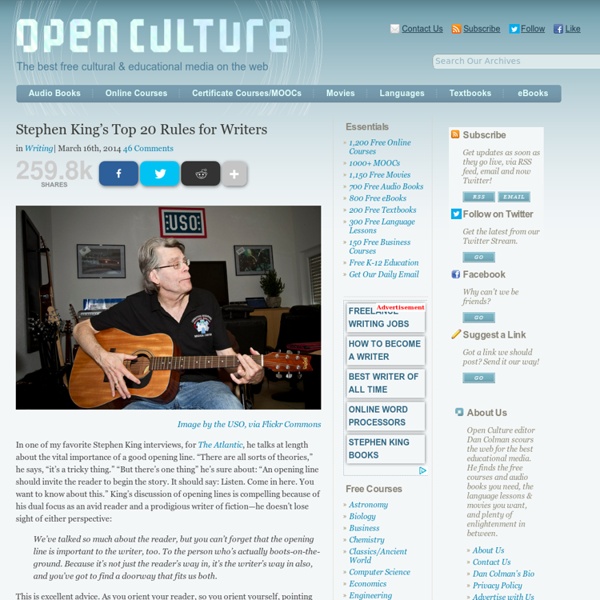 Image by the USO, via Flickr Commons In one of my favorite Stephen King interviews, for The Atlantic, he talks at length about the vital importance of a good opening line. “There are all sorts of theories,” he says, “it’s a tricky thing.” “But there’s one thing” he’s sure about: “An opening line should invite the reader to begin the story. It should say: Listen. Come in here. We’ve talked so much about the reader, but you can’t forget that the opening line is important to the writer, too. This is excellent advice. Revision in the second draft, “one of them, anyway,” may “necessitate some big changes” says King in his 2000 memoir slash writing guide On Writing. 1. 2. 3. 4. 5. 6. 7. 8. 9. 10. 11. 12. 13. 14. 15. 16. 17. 18. 19. 20. See a fuller exposition of King’s writing wisdom at Barnes & Noble’s blog. Related Content: Stephen King Creates a List of 96 Books for Aspiring Writers to Read Stephen King Writes A Letter to His 16-Year-Old Self: “Stay Away from Recreational Drugs”

18 Things Highly Creative People Do Differently Creativity works in mysterious and often paradoxical ways. Creative thinking is a stable, defining characteristic in some personalities, but it may also change based on situation and context. Inspiration and ideas often arise seemingly out of nowhere and then fail to show up when we most need them, and creative thinking requires complex cognition yet is completely distinct from the thinking process. Neuroscience paints a complicated picture of creativity. David Foster Wallace on Why You Should Use a Dictionary, How to Write a Great Opener, and the Measure of Good Writing By Maria Popova “Readers who want to become writers should read with a dictionary at hand,” Harvard psycholinguist Steven Pinker asserted in his indispensable guide to the art-science of beautiful writing, adding that writers who are “too lazy to crack open a dictionary” are “incurious about the logic and history of the English language” and doom themselves to having “a tin ear for its nuances of meaning and emphasis.” But the most ardent case for using a dictionary came more than a decade earlier from none other than David Foster Wallace. In late 1999, Wallace wrote a lengthy and laudatory profile of writer and dictionary-maker Bryan A.

How to Weave Backstory Seamlessly Into Your Novel My first science thriller, Freezing Point, opens with the crew of a fishing trawler braving rough seas off the coast of St. John’s, Newfoundland: The wind howled around the solitary trawler like an angry god. The 7 Cardinal Virtues of Successful Writers While the seven deadly sins are generally agreed upon, there are many lists of life's most important virtues. Today I will bring you another such list: Here are the seven cardinal virtues of successful writers. 1) DILIGENCE for regular writing I've said it before and I will keep saying it until it gets stuck on loop in your own head: To be a writer, what you have to do is write. Everything else you need to know can be picked up along the way. A daily writing routine will move you far closer to your writing goals than any reading project or theoretical study ever could.

Planning a Novel: Character Arc In A Nutshell It’s NaNoWriMo Season, and that means a ton of writers are planning their novels. Or, at the very least (in the case of you pantsers) thinking about their novel. Whether you plot or pants, if you don’t want to end up in No Man’s Land halfway to 50K, it is often helpful to have a solid foundation of ideas about your book. So, let’s look at the biggie of a novel: Character Arc. If you plot, make some notes, copious notes! If you pants, spend some time mulling these over in the shower leading up to November 1st.

201 Ways to Arouse Your Creativity Arouse your creativity Electric flesh-arrows … traversing the body. A rainbow of color strikes the eyelids. The world's greatest literature reveals multifractals and cascades of consciousness James Joyce, Julio Cortazar, Marcel Proust, Henryk Sienkiewicz and Umberto Eco. Regardless of the language they were working in, some of the world's greatest writers appear to be, in some respects, constructing fractals. Statistical analysis carried out at the Institute of Nuclear Physics of the Polish Academy of Sciences, however, revealed something even more intriguing. The composition of works from within a particular genre was characterized by the exceptional dynamics of a cascading (avalanche) narrative structure.

5 Ways to Get Rid of Your Damn Empty Modifiers I discussed the need to get rid of empty emphatics when I gave you 8 words to seek and destroy in your writing, but just saying that you should get rid of a thing doesn't say much about the right way to do so. Today I'm going to show you a few of my favorite ways to get rid of your empty modifiers. What exactly is an empty modifier? It's any word whose only role is to intensify the word it's modifying. The prime candidates here are "very" and "really," but "extremely," "intensely," "totally," "absolutely," "quite," and many other emphatic modifiers make the list. How to Write a Symbolic Story Create your own symbols and your own cosmology and apply this to your story. As the storyteller you are essentially God to your creation, and the symbols you create hold whatever meaning you choose to apply to it. This is something that you may not feel confident enough to do at first, depending on how much writing you do, but you hold all the cards when you are telling a story and this is empowering.

Creating Stunning Character Arcs, Pt. 1: Can You Structure Characters? What if there were a sure-fire secret to creating stunning character arcs? Would you be interested in discovering it? If you care about connecting with readers, grabbing hold of their emotions, and creating stories that will resonate with them on a level deeper than mere entertainment, then the answer has to be a resounding yes! But here’s the thing about character arcs: they’re way too easy to take for granted. On the surface, character arcs seem to boil down to nothing more than a simple three-step process: 1. How to Use Mental Illness in Your Writing Sunday, April 8, 2012 Mental illness is always a tricky topic to discuss, especially in the politically correct society of the present. I can tell you though, I work in a psychiatric hospital, and the patients there are often more than happy to discuss their illnesses, whether you would like them to or not. This is how I came to meet Jim Bob, the recovering-alcoholic duckling who likes nothing more than to chill out with his issue of Cosmo. It is all part of their character, and as we readers and writers of fiction know, character is a huge part of the story world. The most famous mentally ill character in fiction is of course Gollum/Sméagol.

What Famous Novels Look Like Stripped of Everything But Punctuation Jacques Mattheij made a small, but awesome, mistake. He went on eBay one evening and bid on a bunch of bulk LEGO brick auctions, then went to sleep. Upon waking, he discovered that he was the high bidder on many, and was now the proud owner of two tons of LEGO bricks. (This is about 4400 pounds.) He wrote, "[L]esson 1: if you win almost all bids you are bidding too high." Plots Disciplines > Storytelling > Plots Different plots | The story structure | See also Stories have plots or storylines, by which the stories are told. Writing Fiction: Symbolism and All That Maybe you never got anything out of your literature courses except a strong dislike for “analyzing a story to death.” Sometimes the symbolic interpretation of a story or poem can seem pretty far-fetched. Nevertheless, as soon as you start writing, you start writing on some kind of symbolic level. Maybe you’re not conscious of it, but it’s there: in your characters, their actions, the setting, and the images. (Some writers are very powerful symbolists, but don’t realize it; that’s why authors are often poor critics of their own work.) You may argue that your writing simply comes out of your own life and experience, and has nothing to do with “literary” writing.

Related:
Related:  dianemarycowan2   -  About Writing   -  Writing - How to write   -  Dark Copy | Text Editor   -  Links for Aspiring Writers   -  Writer Unboxed – about the craft and business of fiction   -  Write yourself in. Figment   -  Internet Resources - Writers Resources - Writing Links & Writers Links for Writers - Fiction Writing   -  Principles of Composition   -  36 Writing Essays by Chuck Palahniuk | LitReactor   -  How to Write a Horror Story (with Sample Stories) - wikiHow   -  How to Write a Short Story (with Sample Stories)   -  How to write a book now and finish   -  Tapas: Read and Discover Comics Online   -  Ten steps for writing an essay - School A to Z   -  Misktakes In Writing   -  Seven Tips From Ernest Hemingway on How to Write Fiction   -  70 useful sentences for academic writing   -  How To Write A Novel Using The Snowflake Method   -  Newspaper Blackout Poetry   -  5 Writing Exercises That Will Make You More Creative   -  Ten rules for writing fiction   -  Gingko App   -  LitLift - A FREE online novel and story writing application   -  byeink · Create professional ebooks   -  StackEdit – In-browser Markdown editor   -  Plot Generator   -  WRITING TOOLS - WRITERS HELPING WRITERS™   -  The 10 Types of Writers' Block (and How to Overcome Them)   -  Digital Art Journaling – Resources/Tutorials/Links | suruha   -  HowToMakeMyBlog - Smart and actionable blogging advice   -  Forums | National Novel Writing Month   -  Free Graphic Organizers for Teaching Writing   -  How to Jumpstart Your Journaling | A 31-Day Journaling Prompt Calendar | The Art of Manliness   -  The world's most difficult books: how many have you read? | Books | theguardian.com   -  The Annotated Bibliography - How to Prepare an Annotated Bibliography