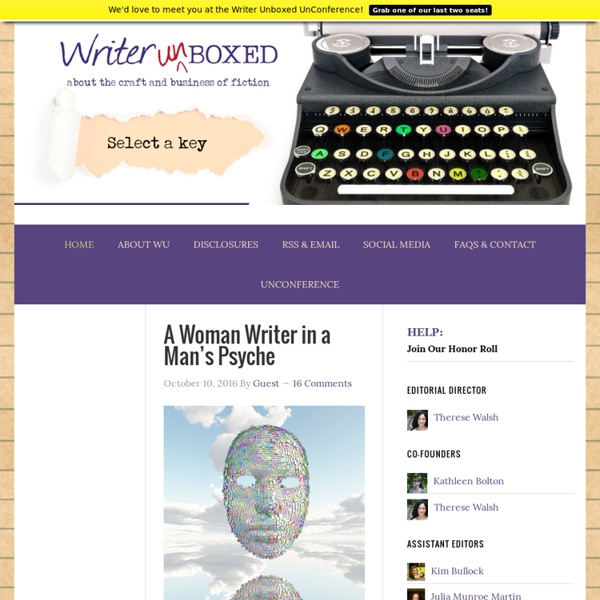 When my youngest was a wee lad, there was a period when I knew I was failing him as a parent. Day after day, from the moment I woke him up to take him to the sitter’s until I tucked him into bed (for the last time), we were locked in one power struggle after another. I wanted him to have a playful, imaginative childhood, yet the word I uttered with the most frequency was no. Worse, while I retained the upper hand, I was under no illusion that would persist. Short of formal therapy, I’d already exhausted every resource at my disposal. I’d bent The ToolMaster’s ear whenever he could call from his enforced work absence.

102 Resources for Fiction Writing « Here to Create UPDATE 1/10: Dead links removed, new links added, as well as Revision and Tools and Software sections. Are you still stuck for ideas for National Novel Writing Month? Or are you working on a novel at a more leisurely pace? For writers: hints - Mem Fox So you want to write a picture book… There’s some quick-and-snappy advice below, in case you’re in a hurry, but don’t forget to read the important list of 20 do’s and 20 don’ts, which you’ll find at the end of the first section. And there’s even more advice after that. Before I continue, however, you will discover, if you’re lucky, that the two most important people in anyone’s writing life are agents and editors. First you will need an agent to help you find a publisher; then the publishing house will assign you an editor. A book that’s accepted doesn’t mean it won’t change radically after an editor has cast an eye over it.

Writing Fantasy Last night, A Game Of Thrones author George R.R. Martin took to the stage at the Sydney Opera House to discuss his popular fantasy series, the spin-off HBO TV show and his craft as a writer. Below are ten kernels of wisdom that could help budding authors write their own fantasy saga. (Surprisingly, ‘take your time’ isn’t one of them.) Photo: Getty Images Pixar’s 22 Golden Rules of Storytelling Back in 2011, then Pixar storyboard artist Emma Coats (now freelancing) tweeted 22 rules of storytelling, according to Pixar. Coats learned the ‘guidelines’ from senior colleagues on how to create appealing stories, tweeting the nuggets of wisdom over a 6 week period. Last week, artist and User Experience Director at Visceral Games (a subsidiary of Electronic Arts), Dino Ignacio, created a series of image macros of the 22 rules and posted them to Imgur and Reddit. Below you will find the list of image macros along with a text summary of Pixar’s 22 rules of storytelling at the end of the post. Enjoy! [Sources: Emma Coats, Dino Ignacio, The Pixar Touch]

3 Types of Character Arcs: Choose the Best for Your Novel How Does Your Character Change? You know your character must change somehow over the course of your novel. But how? And more than that, how do you sync the changes with the external plot? Should You Write a Novel or Short Story? When the urge to write fiction sets upon you—when you get that sudden spark, that thunderclap of Oh, my gosh, maybe I could write this!—it’s natural to try your hand at a short story. But there comes a day when you’re considering an idea, and you realize you’ve been kicking it around for quite a while. Maybe you’ve written an opening scene. The 7-Step Write a Book Fast Program Post written by Leo Babauta. I’m often asked about writing (something I’ve done professionally for 22 years), and one of the most common things people want help with is writing a book. I’ve written a number of books, including 110,000 words of a novel in a month (in addition to blogging regularly), and numerous non-fiction books. I could share a lot of tips for writing a book, but my favorite secret is how I can write a book in just three days. I’ve written several books this way, and really, it’s the same process I used to write 110,000 words in a month.

Action Stories Think “action scene,” and you probably think of the Hollywood version: A character is thrust into high-stakes, physical drama (a gunfight, a daring rescue, a desperate escape) that changes her in some important way, and moves the action forward. Action scenes serve the same function in your fiction, but they need not be over-the-top to be effective. A surprise phone call, an unexpected visit, or an ill-timed delay will force your character to respond quickly (rather than reflect), and allows you to advance the plot without miring it in long descriptive passages and explanations. The key to writing action scenes is to make sure that something happens that impels your protagonist to act, reveals her capacity to deal with problems, and affects future events in the story. “The only requirement of an action scene is that it rely in part upon physical movement through the space you’ve created, and evoke a sense of time passing,” says Jordan E.

What Are My Writing Tips? It pays to read through your spam filter, sometimes. You will be amazed by what you may find. Along with the usual spams, you could either find a legit comment or a piece of inspiration. I have found such comments. The other day, I found a curious message, in my spam filter. An apparent new blogger asked a question. Things Writers Forget When Writing Fight Scenes Recently, I attended VCON, a science fiction and fantasy conference in Surrey (part of Metro Vancouver) and attended a session called “Writing About Fighting.” The panel consisted of writers and experts who were disciplined in multiple martial arts, including authors Lorna Suzuki and T.G. Shepherd, and Devon Boorman, the swordmaster of Academie Duello in Vancouver. (I lost my program, so if you remember who else was there, please leave it in the comments, below)

Related:
Related:  Start Writing 2   -  write stuff   -  dianemarycowan3   -  Writing   -  Writing - How to write   -  Writing to Write   -  30+ Tools For The Amateur Writer   -  National Novel Writing Month   -  Where the Writers Go to Write (Poetry, Stories, Contests and more!)   -  Welcome to Writing-World.com!   -  General Fiction   -  Dark Copy | Text Editor   -  Links for Aspiring Writers   -  Write yourself in. Figment   -  Letter Generator   -  Internet Resources - Writers Resources - Writing Links & Writers Links for Writers - Fiction Writing   -  Principles of Composition   -  Home   -  36 Writing Essays by Chuck Palahniuk | LitReactor   -  400 Writing Topics - Prompts and Suggestions for Paragraphs, Essays, and Speeches - Essay Topics   -  How to Write a Horror Story (with Sample Stories) - wikiHow   -  Creative Uses of Magic in Your Fantasy Story   -  writing prompts — my 28 most tried and true writing prompts   -  Welcome to Teaching That Makes Sense!   -  General Journal Prompts - Journal Prompts   -  My StoryMaker : Carnegie Library of Pittsburgh   -  Svbtle   -  How to Collage in Your Art Journals   -  How to Write a Short Story (with Sample Stories)   -  How to write a book now and finish   -  Notebooks - Your unique notebook on iPad, iPhone, Mac and PC   -  The Writers Block. Writing resources for the students at PVCC   -  Tapas: Read and Discover Comics Online   -  Ten steps for writing an essay - School A to Z   -  Misktakes In Writing   -  How to Use Popular Music to Teach ESL   -  The Secret Door - Step Through To The Unknown… | Safestyle UK   -  Seven Tips From Ernest Hemingway on How to Write Fiction   -  The best free software for writers 2017   -  70 useful sentences for academic writing   -  How To Write A Novel Using The Snowflake Method   -  The Top 10 Relationship Words That Aren't Translatable Into English | Harpy's Review | Big Think