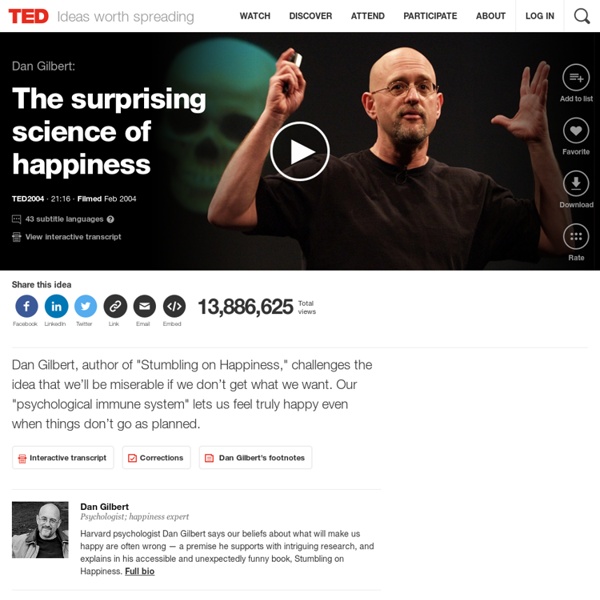 Hardwiring Happiness Rick Hanson is a master of his craft, showing us a wise path for daily living in this book. Based in the latest findings of neuroscience, this book reveals that if we understand the brain a little, we can take care of our lives a lot, and make a real difference to our well-being. Here is a book to savor, to practice, and to take to heart. CNN Student News - February 17, 2016 Politics swirl around the notion of filling a late justice's seat on the U.S. Supreme Court. Oil-producing nations grapple with the prospect of changing their production plans.

Why what we think we know about schizophrenia is wrong I remember the first time I forcibly medicated a person against his will. It was 13 years ago, not long after I’d qualified as a mental health nurse, and I had started my career working on a psychiatric ward providing assessment and treatment for adults in acute phases of serious mental illness. There was a patient (or service user or client or son or brother or friend, depending on who you ask) whom I’ll call Amit. Amit had been refusing any medication for nearly three weeks and with good reason. Use This Simple Daily Habit to Add More Gratitude to Your Life I have a simple gratitude habit that I have been following nearly every day for three years. I want to share it with you here. First, let me set the stage. The Minor Tragedy The other day I ordered takeout from one of my favorite Indian restaurants for dinner.

The diagnosis question Mental health diagnoses can help people understand their experiences and access help. But some practitioners have raised queries, too. Photo: Prospect composite 10 Ways Gratitude Can Change Your Life & 4 Step Gratitude Plan Gratitude can motivate others, increase self-control, build social ties and more…plus 4-step gratitude plan. Gratitude is the new miracle emotion. Although gratitude has been around for as long as human beings, it’s only recently started to get the big thumbs-up from science. So here are 10 ways gratitude can change your life, followed by a quick 4-step plan to help maximise your own gratitude, whatever level you start from. There’s even a trick for those suffering from ‘gratitude burnout’.

55 Steps: A Battle Cry Against Forced 'Treatment’ For us All - Mad in the UK Editor’s note: This blog originally appeared on Rai Waddingham’s Behind the Label. Last week I emerged from hibernation (life is a bit tough right now for lots of reasons) to attend a ‘Psychology at the Movies’ screening of 55 Steps – an important and hard-hitting film based on a true story of Eleanor Reise (a lady repeatedly drugged against her will, played by Helena Bonham Carter) and Collette Hughes (her lawyer, played by Hilary Swank) that has been effectively buried. What I write here is based on a series of tweets I made, trying to explain why we need to work together to resurrect it.

Dr. Rick Hanson - Author of Buddha's Brain and Just One Thing posted on: November 30th, 2012 Who do you argue with?The Practice:Don’t quarrel.Why? Thanksgiving-anglais From which city did the Mayflower depart? The Pilgrim Monument in Provincetown commemorates the Pilgrims' first landing in New England. How many days did it take for the Mayflower to reach the New World? How many people were there on board that ship? John Alden (a barrel-maker)and his wife. They had 10 children. DSM 5 Is Guide Not Bible—Ignore Its Ten Worst Changes This is the saddest moment in my 45 year career of studying, practicing, and teaching psychiatry. The Board of Trustees of the American Psychiatric Association has given its final approval to a deeply flawed DSM 5 containing many changes that seem clearly unsafe and scientifically unsound. My best advice to clinicians, to the press, and to the general public - be skeptical and don't follow DSM 5 blindly down a road likely to lead to massive over-diagnosis and harmful over-medication. Just ignore the ten changes that make no sense.