50 Tricks to Get Things Done Faster, Better, and More Easily 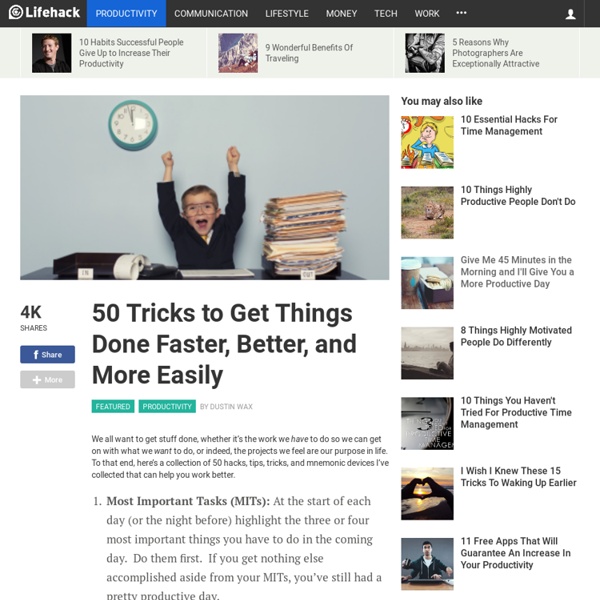 We all want to get stuff done, whether it’s the work we have to do so we can get on with what we want to do, or indeed, the projects we feel are our purpose in life. To that end, here’s a collection of 50 hacks, tips, tricks, and mnemonic devices I’ve collected that can help you work better. Most Important Tasks (MITs): At the start of each day (or the night before) highlight the three or four most important things you have to do in the coming day. Do them first. If you get nothing else accomplished aside from your MITs, you’ve still had a pretty productive day.Big Rocks: The big projects you’re working on at any given moment. Set aside time every day or week to move your big rocks forward.Inbox Zero: Decide what to do with every email you get, the moment you read it.

Benefits of Simplicity to Productivity Simplicity is often perceived as boring, unattractive and unremarkable. Majority of people want something striking and complicated. But as Leonardo da Vinci has said, Simplicity is the ultimate sophistication. Different to the common belief, simplicity is not boring, unattractive or unremarkable. In fact, simplicity represents elegance and complexity. Teacher to parents: About THAT kid (the one who hits, disrupts and influences YOUR kid) Amy Murray is the director of early childhood education at the Calgary French & International School in Canada. The following post, which appeared on her blog, Miss Night’s Marbles and which I am republishing with her permission, is a powerful open letter directed to parents about THAT kid, the one other kids go home and talk about, the one who is violent, curses and gets angry in class, the one who parents worry will hurt, disrupt and perhaps influence their own children. Murray is also the co-founder of #Kinderchat (www.kinderchat.net), a twitter-based global community for educators of young children.

Time Management Tips: How to Find the Right Mindset to Succeed With Time Management For the past several years I have worked with time management techniques such as lists, prioritization, planning and so on. But it wasn’t until I adopted a Quadrant 2 mindset that I really started seeing results. The phrase “Quadrant 2” comes from Stephen Coveys book The 7 Habits of Highly Effective People The 90 Best Lifehacks of 2009: The Year in Review Another year is winding down, and that means it’s time to take a look back at what we’ve done here at Lifehack over the last 12 months. 2009 was a scary year for a lot of people – corporate layoffs, a shaky global economy, stunningly vicious politics, old wars grinding on and new ones flaring up. In the midst of all this, though, many saw opportunities; with the myth of life-long corporate employment shattered as some of the world’s biggest companies teetered on the brink of collapse, entrepreneurship enjoyed a major resurgence. This rise in self-reliance extends beyond our work life, too – people are embracing a do-it-yourself, person-to-person lifestyle where status and the display of wealth matter much less than authenticity and social interaction.

How to Work Like the Masters Written by Jay of Dumb Little Man. When I need work done on my car, I consult with a mechanic. When it's time to build a deck in the backyard, I will search for an expert and listen to what he says. How Keeping Things Simple Makes You A Productive Entrepreneur Running your own business is a complicated affair; making it successful can be even more complicated. If you don’t have a plan to be productive and keep focused, the details that you are responsible for can quickly overwhelm you. In fact, one of the biggest failings of new entrepreneurs is to get so caught up in an avalanche of unimportant details that more important priorities get left unattended on the table. What can you do to be a productive entrepreneur, focused on what really matters? Start by making your life itself simpler – become a minimalist. Get up early, so that you don’t lose those most productive early hours.

The Random Reflections of Little Red Riding Hood: Top Ten Quotes on Hope 1. “Hope is the thing with feathers That perches in the soul And sings the tune without the words And never stops at all.” ―Emily Dickinson How to Stop Being Lazy and Get More Done: 5 Expert Tips Before we commence with the festivities, I wanted to thank everyone for helping my first book become a Wall Street Journal bestseller. To check it out, click here. Some days the to-do list seems bottomless. Just looking at it is exhausting. We all want to know how to stop being lazy and get more done. I certainly want the answer.

The 100 Best Lifehacks of 2010: The Year in Review Happy New Year everyone! It’s the first week of 2011 and many of us are getting ready to kick off the brand new year with a big bang. As we start off 2011 with our new resolutions and goals, let us now look back at the best posts at Lifehack in the past year. In this review post, I have gathered 100 of the best LifeHack articles in 2010. These articles have been selected based on your votes and how much YOU have talked about them in social media (Facebook and Twitter).