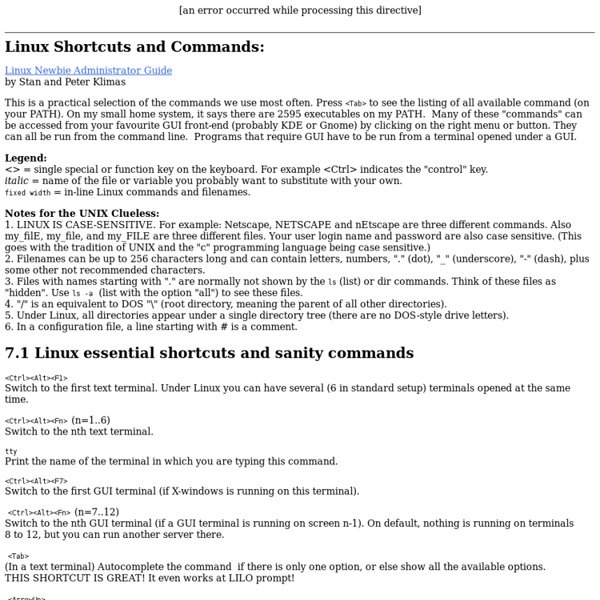 [an error occurred while processing this directive] Linux Shortcuts and Commands: Linux Newbie Administrator Guideby Stan and Peter Klimas This is a practical selection of the commands we use most often. Press <Tab> to see the listing of all available command (on your PATH). On my small home system, it says there are 2595 executables on my PATH. Legend:<> = single special or function key on the keyboard. Notes for the UNIX Clueless:1. 7.1 Linux essential shortcuts and sanity commands <Ctrl><Alt><F1>Switch to the first text terminal. <Ctrl><Alt><Fn> (n=1..6) Switch to the nth text terminal. ttyPrint the name of the terminal in which you are typing this command. <Ctrl><Alt><F7>Switch to the first GUI terminal (if X-windows is running on this terminal). <Ctrl><Alt><Fn> (n=7..12) Switch to the nth GUI terminal (if a GUI terminal is running on screen n-1). <Tab>(In a text terminal) Autocomplete the command if there is only one option, or else show all the available options. exitLogout. . .. .

Best Linux Software You’ve made the switch from Windows or Mac OS X, and now you’re looking for applications to install. Or maybe you’re a long-time Linux user who’s keeping an eye out for what’s new. Either way, you’ve come to the right place. You’ve already picked a Linux distro and have settled on a desktop environment. TB Unix Cheat Sheet Treebeard's Homepage : Computer Topics | Rants and Writes People who use Windows without DOS, or a Macintosh, or PPP without a terminal, or an ISP's menu without the Unix prompt are at a disadvantage. Something is happening, and they don't know what it is. Top 10 Linux Speed Hacks Do you like this story? Ah…Linux..The pinnacle of what open source can achieve today..the brainchild of Linus Torvalds has surely come a lot further and evolved to show the world what it is capable of.As an extremely reliable Operating system, Linux rarely needs to be rebooted. But when it does, it’s often slow to boot.Loads of Matrix style lines scrolling down the screen are sure to drive nuts added with boot time of GUI initialization.. Fortunately, there are ways to speed things up.

Unix Toolbox Hardware | Statistics | Users | Limits | Runlevels | root password | Compile kernel | Repair grub | Misc Running kernel and system information # uname -a # Get the kernel version (and BSD version) # lsb_release -a # Full release info of any LSB distribution # cat /etc/SuSE-release # Get SuSE version # cat /etc/debian_version # Get Debian version 58 Cool Hacks - LXF Wiki From LXF Wiki (Originally written for Linux Format issue 58, October 2004) Increase your guru points and apply these cunning hacks to boost performance, secure your system and increase productivity - or fun! One of the great things about Linux is that there's usually more than one way to do something. Chances are, the way you are doing a particular task right now isn't necessarily the best way either. This collection of hacks is the result of a lot of effort: some are functional, some are fun, but they are all cool!

Linux Command Line Cheat Sheet by DaveChild - Download free from Cheatography - Cheatography.com: Cheat Sheets For Every Occasion A cheat sheet of the commands I use most for Linux, with popup links to man pages. bash nano linux ls commandline ubuntu server sysadmin shell Download the Linux Command Line Cheat Sheet 2 Pages Like this cheat sheet? 25+ Useful Linux and Unix Cheat sheets Faster programming gives you more time for small business website design and other projects. This is my first post on Cheat sheets. Actually Cheat sheet is a concise set of notes used for quick reference. Linux Commands Cheat Sheet in Black & White Keep this linux cheat sheet on your desk printed, I am sure you will learn them quick and will be a linux expert very soon. We have added had both pdf and image (png) format of the cheat sheet. Please keep us posted if you need us to add more commands. Command are categorized 13 sections according its usage.We have designed the command in white color with black background as we often use on linux shell. We have added bit color for attraction :-).