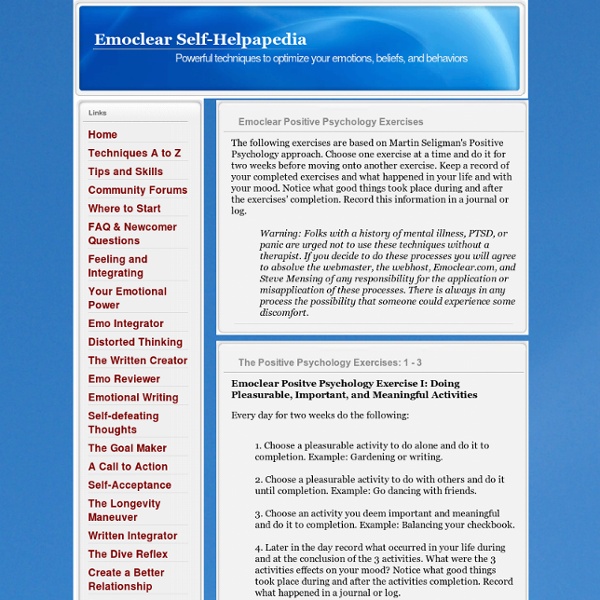 Emoclear Positve Psychology Exercise I: Doing Pleasurable, Important, and Meaningful Activities Every day for two weeks do the following: 1. Emoclear Positive Psychology Exercise II: Building Character. Based on Character Strengths (Peterson & Seligman, 2004). For two weeks pick two activities per day from the list below. The Activity List: 1. Here's a reflection exercise for accessing appreciation and gratitude: This exercise is to be done daily for two weeks. 1. Have fun, Steve

Mind Tools Mindfulness (psychology) Mindfulness as a psychological concept is the focusing of attention and awareness, based on the concept of mindfulness in Buddhist meditation.[1] It has been popularised in the West by Jon Kabat-Zinn.[2] Despite its roots in Buddhism, mindfulness is often taught independently of religion.[3][4] Clinical psychology and psychiatry since the 1970s have developed a number of therapeutic applications based on mindfulness for helping people suffering from a variety of psychological conditions.[5] Several definitions of mindfulness have been used in modern psychology. According to various prominent psychological definitions, Mindfulness refers to a psychological quality that involves bringing one’s complete attention to the present experience on a moment-to-moment basis,[6] or involves paying attention in a particular way: on purpose, in the present moment, and nonjudgmentally,[6] Bishop, Lau, and colleagues (2004)[8] offered a two-component model of mindfulness:

Positive Psychology Exercises in Positive Psychology Randy Martin, PhD www.PositivePsychologists.com Three Good Things: At the end of each day, write down three things that went well during the day. Writing Your Own Legacy Think ahead to your life as you would like it to be and how you would like to be remembered by those closest to you. We all have things we want to do “someday;” goals we hope to achieve, places we’d like to visit…when we “have time.” You at Your Best Write a story about an event that brought out the best in you. Gratitude Letter American society seems to lack gratitude rituals: formal ways of expressing thanks to those who have done well by us. Random Acts of Kindness Random Acts of Kindness (RAKs) are altruistic acts. · Letting someone cut in front of you in line · Paying the toll of the person behind you · Sending a funny note/card to a friend “just because” · Giving your partner an unsolicited foot massage, or creating a mix CD for your coworker Savoring Web Sites on happiness: Dr.

Action for Happiness List of cognitive biases Systematic patterns of deviation from norm or rationality in judgment Cognitive biases are systematic patterns of deviation from norm and/or rationality in judgment. They are often studied in psychology, sociology and behavioral economics.[1] Although the reality of most of these biases is confirmed by reproducible research,[2][3] there are often controversies about how to classify these biases or how to explain them.[4] Several theoretical causes are known for some cognitive biases, which provides a classification of biases by their common generative mechanism (such as noisy information-processing[5]). Explanations include information-processing rules (i.e., mental shortcuts), called heuristics, that the brain uses to produce decisions or judgments. There are also controversies over some of these biases as to whether they count as useless or irrational, or whether they result in useful attitudes or behavior. Belief, decision-making and behavioral[edit] Social[edit] Memory[edit] [edit]

Learning & Brain Society Home Resilience in Positive Psychology: Bouncing Back & Going Strong Home » Resilience » Resilience in Positive Psychology: Bouncing Back & Going Strong The subject of resilience in positive psychology deals with the ability to cope with whatever life throws at you. Some people can be knocked down by life and return as a stronger person than ever before. A resilient person works through challenges by using personal resources, strengths and other positive capacities of psychological capital such as hope, optimism, and self-efficacy. “If you can’t change it, change the way you think about it” More Resilience Tools? Become a Science-Based Practitioner! The Positive Psychology toolkit is a science-based, online platform containing 135+ exercises, activities, interventions, questionnaires, assessments and scales. Let’s Start at the Beginning Relationships play a vital role in building the resilience of an individual. The authoritative parenting style displays the qualities of warmth and affection that also provide structure and support to the child. Seph Fontane