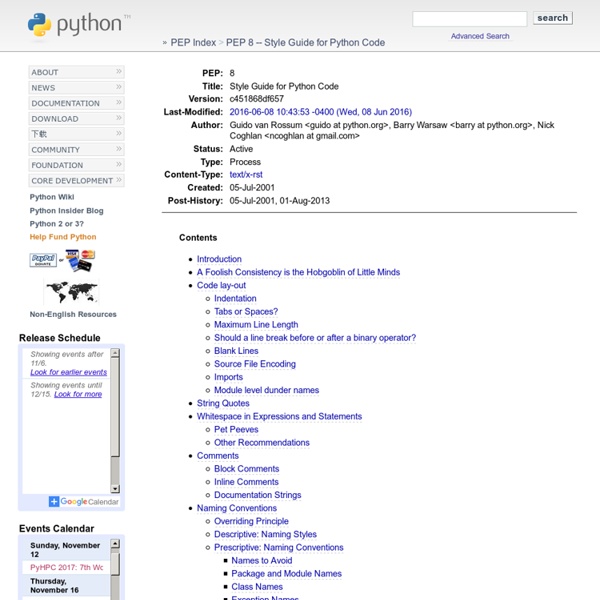 Code should be written in a way that does not disadvantage other implementations of Python (PyPy, Jython, IronPython, Cython, Psyco, and such).For example, do not rely on CPython's efficient implementation of in-place string concatenation for statements in the form a += b or a = a + b. This optimization is fragile even in CPython (it only works for some types) and isn't present at all in implementations that don't use refcounting. In performance sensitive parts of the library, the ''.join() form should be used instead. This will ensure that concatenation occurs in linear time across various implementations.Comparisons to singletons like None should always be done with is or is not, never the equality operators.Also, beware of writing if x when you really mean if x is not None -- e.g. when testing whether a variable or argument that defaults to None was set to some other value. The other value might have a type (such as a container) that could be false in a boolean context!

Python Library From OSGeo Wiki Motivation Several OSGeo software projects support Python. Elements and Element Trees Fredrik Lundh | Last updated July 2007 This note introduces the Element, SubElement and ElementTree types available in the effbot.org elementtree library. For an overview, with links to articles and more documentation, see the ElementTree Overview page. For an API reference, see The elementtree.ElementTree Module. You can download the library from the effbot.org downloads page.

Glossary The default Python prompt of the interactive shell. Often seen for code examples which can be executed interactively in the interpreter. The default Python prompt of the interactive shell when entering code for an indented code block or within a pair of matching left and right delimiters (parentheses, square brackets or curly braces). 2to3 A tool that tries to convert Python 2.x code to Python 3.x code by handling most of the incompatibilities which can be detected by parsing the source and traversing the parse tree.

Code Like a Pythonista: Idiomatic Python In this interactive tutorial, we'll cover many essential Python idioms and techniques in depth, adding immediately useful tools to your belt. There are 3 versions of this presentation: ©2006-2008, licensed under a Creative Commons Attribution/Share-Alike (BY-SA) license. The Python Standard Library While The Python Language Reference describes the exact syntax and semantics of the Python language, this library reference manual describes the standard library that is distributed with Python. It also describes some of the optional components that are commonly included in Python distributions. Python’s standard library is very extensive, offering a wide range of facilities as indicated by the long table of contents listed below. The library contains built-in modules (written in C) that provide access to system functionality such as file I/O that would otherwise be inaccessible to Python programmers, as well as modules written in Python that provide standardized solutions for many problems that occur in everyday programming.

python 2.x How to Think Like a Computer Scientist — Learning with Python 2nd Edition Navigation How to Think Like a Computer Scientist¶ Learning with Python¶ 2nd Edition (Using Python 2.x) by Jeffrey Elkner, Allen B. Downey, and Chris Meyers Documentation QuantLib reference manual [HTML] The reference manual is also available for offline reading from the SourceForge download page Books Instant Python This is a minimal crash-course in the programming language Python. To learn more, take a look at the documentation at the Python web site, www.python.org; especially the tutorial. If you wonder why you should be interested, check out the comparison page where Python is compared to other languages. This introduction has been translated into several languages, among them Portuguese, Italian, Spanish, Russian, French, Lithuanian, Japanese, German and Greek, and is currently being translated into Norwegian, Polish, and Korean.

How not to write Python code – Ikke's blog Lately I’ve been reading some rather unclean Python code. Maybe this is mainly because the author(s) of the code had no in-depth knowledge of the Python language itself, the ‘platform’ delivered with cPython,… Here’s a list of some of the mistakes you should really try to avoid when writing Python code: Some days ago RealNitro pointed me at this list of essential Python readings. “Idiomatic Python” is a must-read, even for experienced Python developers. That’s about it for now, maybe I’ll add some more items to this list later on.