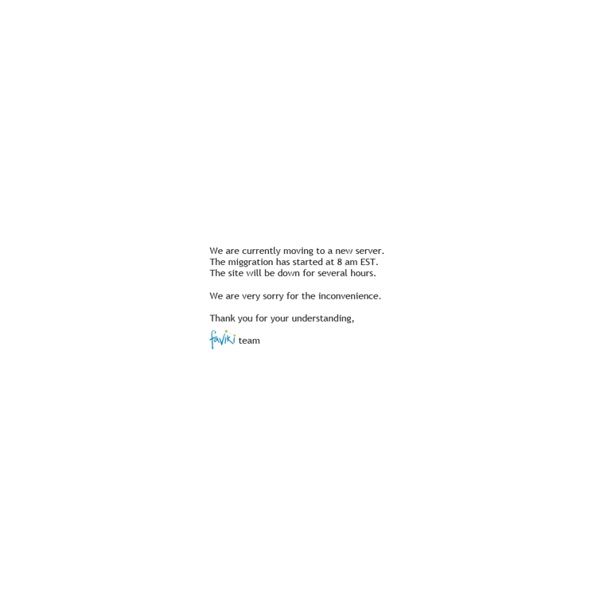 Faviki is a social bookmarking tool that lets you use Wikipedia concepts as tags. Faviki allows you to keep your own tags and connect them to common, universal concepts from the world's largest collection of knowledge! Free-word tags do not have defined meanings, so it isn’t always clear what a particular tag represents. Does the tag “jaguar” represent the animal, the car company, or the operating system?Faviki uses Common tags - unique, well-defined concepts from Wikipedia that allow you to state what a web page is exactly about, letting your computer understand you better. Common tags allow you to find your bookmarks easier.

Mapping del.icio.us with Anthracite and OmniGraffle Several people have asked me how I produced the visualizations that I used in my talk on del.icio.us. While those visualizations were constructed with a rather eclectic mixture of homebrewed code, assorted applications, and a good bit of elbow grease, I decided to put together a tutorial for people who might be interested in this type of visual exploration, but are not inclined to write custom Perl code to do so. Hence, I have selected a combination of two very nice applications for Mac OS X - Anthracite and OmniGraffle - to produce similar visualizations.

Zimilate: Free Website to Save, Organize Web Content, Notes, Images Zimilate is an amazing free online service that lets you save practically any digital content for future reference. You can use Zimilate to save images, notes, links, simple files, and even entire webpages. You can either simply drag and drop files from your computer to Zimilate’s web interface to save them, or use the Zimilate browser clipper extension to directly save entire web pages to your Zimilate account. You can save your content to different sections (called spheres), and add tags in order to manage and organize it better. Zimilate lets you create as many spheres as you want, and you can even re-order them to create a hierarchical structure. All of the saved content in Zimilate is searchable, and can be made private or public (if you want to share it with others).

5 Simple Provenance Statements Providing easily processable information about the provenance or origins of Web pages and data is important. It lets us give credit where its due and it helps others trust the information we publish on the Web. Here’s some simple provenance statements one can make using PROV-DM, the recently released working draft of a data model for provenance from the W3C. Before getting into the examples, a couple of notes: We are still working on cleaning it up and simplifying the presentation of the data model. 28 delicious alternatives to Delicious Well, we've all seen the news that the single most insane idea of the year award can go to Yahoo who are apparently going to be closing Delicious. Quite why they're not prepared to ask people to pay for access, or even to offer it to someone like the Library of Congress to take over defeats me, but clearly straightforward thinking isn't their forte else they wouldn't be taking this stupid step in the first place. So, if you want to choose a different bookmarking resource, what options are available to you? The good news is that there's quite a lot.

StumbleUpon - The One True Simple Way to Organize Your Online Reading Ever heard of StumbleUpon? It’s been around for quite some time (you can Google it if you are truly an information freak) and, according to my humble opinion, StumbleUpon’s value is underestimated by everyone. Also Read: StumbleUpon for Business: An Introduction NewsCodes - IPTC IPTC creates and maintains sets of concepts – called a controlled vocabulary or a taxonomy – to be assigned as metadata values to news objects like text, photographs, graphics, audio and video files and streams. This allows for a consistent coding of news metadata across news providers and over the course of time – that’s the reason why we call them IPTC NewsCodes. What can NewsCodes be used for? For the news industry – but also far beyond – it is a strict requirement being able to assert something about the content of a news item, to apply so called metadata.

The Challenge of Building the Semantic Web The Semantic Web is often described as an extension of the current Web. The idea of what extending the Web should look like can be seen in Linked Data. In order to better understand the importance of Linked Data, one has to understand the context in which it emerged, i.e. the problem it has been trying to solve. In Linked Data – design issues in 2006 Tim Berners-Lee wrote:

Diigo and Delicious « Interactive Inquiry Several weeks ago, I wrote a post about the new features of Diigo, Version 5. As a result of that blog post, I was contacted by Maggie Tsai, co-founder of Diigo, who asked me to help update a comparison chart on their website. This post contains a ‘pretty’ version of that document. What do you think? Did I miss anything? Partners with StumbleUpon Don’t you love StumbleUpon, the discovery engine that helps you find the best of the web so easily? We have partnered with StumbleUpon to create the StumbleUpon featured Email App that allows you to keep your friends updated on your discoveries and get you new followers simply by emailing. Now you can share your latest great discoveries not only on StumbleUpon but also in every email you send! Get StumbleUpon Email App

Center for Complex Networks and Systems Research UPDATE: As of 2015 the GiveAlink project has been archived and the GiveALink.org website is no longer operational. Link analysis algorithms leverage hyperlinks created by authors as semantic endorsements between pages, while social bookmarks provide a way to leverage annotations by information consumers as a source of information about pages. This project explores a novel approach that is a synergy of the two: soliciting annotations from users about the content of pages, in a way that implicitly forms networks of relationships between and among resources and tags. NAME: LONG NAME This version: 2013-01-12 - v0.1 [owl ] History: Antidot’s Open Source db2triples Implements R2RML and Direct Mapping Antidot, which makes the semantically-powered Information Factory and Antidot Finder Suite software, this month released its db2triples as open source component software, available here, which implements the W3C RDB2RDF Working Group’s proposed R2RML language and Direct Mapping, covered here. Antidot, in fact, shared with the W3C its experience leveraging Direct Mapping and R2RML to, in just half a day, fetch information from hundreds of tables in a client’s Magento ecommerce database to transform it to a graph model. That’s normally a complex task, says Antidot founder and CEO Fabrice Lacroix, which would involve data transformation and database content indexing of an unknown database model. “No one [here at Antidot] knows the complex, dynamic data model from Magento, and it’s very difficult to reverse-engineer these sort of models,” he says.