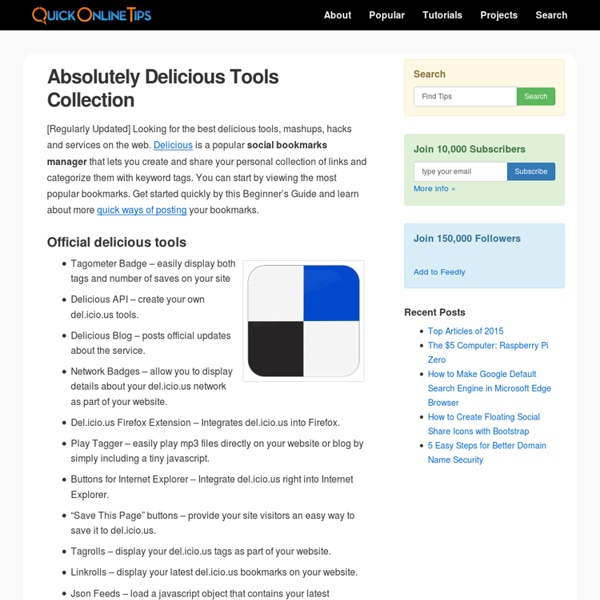 [Regularly Updated] Looking for the best delicious tools, mashups, hacks and services on the web. Delicious is a popular social bookmarks manager that lets you create and share your personal collection of links and categorize them with keyword tags. You can start by viewing the most popular bookmarks. Get started quickly by this Beginner’s Guide and learn about more quick ways of posting your bookmarks. Official delicious tools Tagometer Badge – easily display both tags and number of saves on your siteDelicious API – create your own del.icio.us tools.Delicious Blog – posts official updates about the service.Network Badges – allow you to display details about your del.icio.us network as part of your website.Del.icio.us Firefox Extension – Integrates del.icio.us into Firefox.Play Tagger – easily play mp3 files directly on your website or blog by simply including a tiny javascript.Buttons for Internet Explorer – Integrate del.icio.us right into Internet Explorer. Share This Article:

introsp.icio.us: Using del.icio.us to identify your interests The Ruby script below analyzes your del.icio.us links to generate a list of your favourite interests. It lists the tags that are most frequently used in your links. Because you may not have been diligent about descriptively tagging your links, this script uses the tags from *all* users, for *your* links. The result is a list of tags, sorted by the number of your links that have been associated with each tag. In effect, you get a list of your favourite interests, starting with the ones you enjoy the most. It is a means of introspection, using the descriptive power of shared tagging in del.icio.us.

Answers Parvati (Devanagri: पार्वती, IAST: Pārvatī) also known as Gauri, is a Hindu goddess. Parvati is Shakti, the wife of Shiva and the gentle aspect of Mahadevi, the Great Goddess. Parvati is considered to be complete incarnation of Adi Parashakti', with all other goddesses being her incarnations or manifestations. Parvati is nominally the second consort of Shiva, the Hindu god of destruction and rejuvenation. However, she is not different from Satī, being the reincarnation of Shiva's first wife. Parvati is the mother of the gods and goddess, Ganesha and Skanda (Kartikeya).

How to back up del.icio.us bookmarks on your blog - Lifehacker Social bookmarking system del.icio.us makes it easy to post your bookmarks to your blog on a daily basis automatically. Not only is this a great way to back up your del.icio.us bookmarks, it also kills two birds with one stone: participate in the del.icio.us community AND update your blog daily with one del.icio.us post. Want to get it set up for your WordPress or Movable Type-based site? Here's how: While logged into del.icio.us, click on the settings link in the upper right-hand corner and choose daily blog posting under the "experimental" heading.

StumbleUpon's Most Popular Searches and Links of 2011 On StumbleUpon? Come follow the Mashable Channel and discover our favorite articles covering social media, tech news, and digital culture! StumbleUpon, the site that lets you discover the web through its "Stumble!" button, released its Best of StumbleUpon 2011 package, including the infographic below and its most popular links of the year. Mapping del.icio.us with Anthracite and OmniGraffle Several people have asked me how I produced the visualizations that I used in my talk on del.icio.us. While those visualizations were constructed with a rather eclectic mixture of homebrewed code, assorted applications, and a good bit of elbow grease, I decided to put together a tutorial for people who might be interested in this type of visual exploration, but are not inclined to write custom Perl code to do so. Hence, I have selected a combination of two very nice applications for Mac OS X - Anthracite and OmniGraffle - to produce similar visualizations. Neither application is free, but both have free trial periods, should you be inclined to check them out. As an alternative to OmniGraffle, the excellent open source program Graphviz may be used, although it is less user-friendly than OmniGraffle.

StumbleUpon: 10 Tips and Tricks for Power Users On StumbleUpon? Come follow the Mashable Channel and discover our favorite articles covering social media, tech news, and digital culture! Thousands of websites are created every day, yet sometimes the Internet feels a bit stale. How do you filter through all of the junk when you want to discover something new? StumbleUpon is a site that randomly shuffles through websites, curating content and information specifically for you. Since its start, the site has surpassed 20 million users, and continues to be a dominant source of traffic for the world’s top social media sites.

How To… Embed This Infographic <a href= ‎"><img src=" title="10 How Tos" alt="How To Infographic" border="0" class="nopin" /></a><br />Source: <a href=' title='Interesting Facts'><a href=' title='Interesting Facts'>Today I Found Out</a></a> 1) How to drastically increase the life of your shaving razor Before or after you shave (I prefer before so that the blades are dry), place your jeans on a hard flat surface; then run the razor up the pant legs about 10-15 times quickly; then repeat running it down the pant legs 10-15 times quickly. No need to press that hard, but a little pressure is necessary. necessary. In both instances, you want to point the top of the razor in the direction you are rubbing the shaver on the pants.

Fire & Ice Lanterns The old becomes new: A new variation on the outdoor lantern. We have had an unusually warm winter in Michigan this year, and while the temps have been nice, I have had to hold off on this project idea until we got a cold snap. We finally got some snow and cold earlier this week, so I was able to try out this fun winter project. I had pinned a product called Globe Ice Lantern Kits a few months back recognizing that I could DIY them at home. Originally priced at nearly $30 for a kit that makes 6 lanterns, I think they are very reasonable for a small batch. If you are making several (say, for a special event or to light a walkway), you can make 3 of these DIY versions for only $2 worth of supplies from the dollar store.