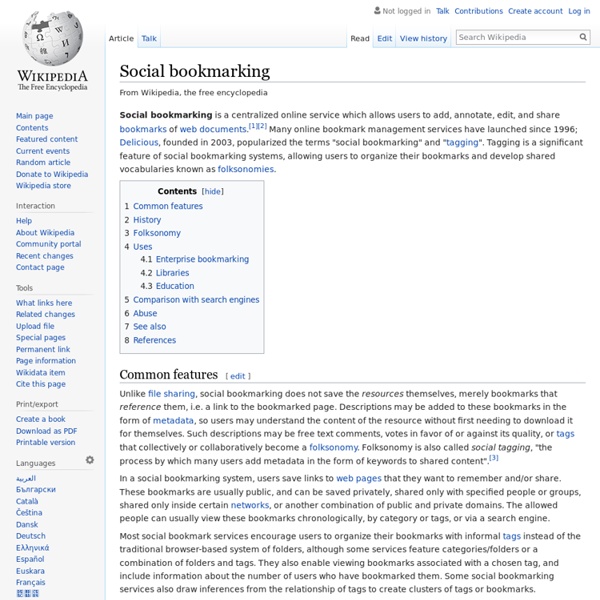 Delicious homepage in October 2012, an example of a social bookmarking website. Common features[edit] In a social bookmarking system, users save links to web pages that they want to remember and/or share. These bookmarks are usually public, and can be saved privately, shared only with specified people or groups, shared only inside certain networks, or another combination of public and private domains. The allowed people can usually view these bookmarks chronologically, by category or tags, or via a search engine. Many social bookmarking services provide web feeds for their lists of bookmarks, including lists organized by tags. As these services have matured and grown more popular, they have added extra features such as ratings and comments on bookmarks, the ability to import and export bookmarks from browsers, emailing of bookmarks, web annotation, and groups or other social network features.[4] History[edit] A user page on del.icio.us in May 2004, displaying bookmarks with tags. Uses[edit]

Dark Net (TV series) Showtime greenlit the series in November 2015. It was created by Mati Kochavi, the founder of Vocativ, and is co-produced by Part2 Pictures.[2] The strange case of The Pigeon-hole Principle (EWD 980) If you come to think about it, The Pigeon-hole Principle presents a case that is curious in more than one respect. It has a remarkably high status: it has a special name, under which it is well-known; Ross Honsberger even calls it "A fundamental tool of combinatorics". It is surrounded by some mystique. Proofs using it are often regarded as something special, something particularly ingenious. This feeling of awe is, for instance, nicely reflected by Honsberger when he concludes one of his examples with "(Another triumph of the pigeonhole principle.)".

Taxonomy From Wikipedia, the free encyclopedia Taxonomy may refer to: Science[edit] In business and economics[edit] In education[edit] Bloom's taxonomy, a standardized categorization of learning objectives in an educational contextClassification of Instructional Programs, a taxonomy of academic disciplines at institutions of higher education in the United StatesSOLO Taxonomy, Structure of Observed Learning Outcome, proposed by Biggs and Collis Comparison of enterprise bookmarking platforms The following tables compare Enterprise bookmarking platforms. General[edit] Date and content types[edit] This table lists the types of data that can be tagged. Adam Reed Early work[edit] Adam Reed and his partner Matt Thompson started out at Cartoon Network doing various odd jobs until they came up with their own show called High Noon Toons in the mid-90s. High Noon Toons was a 3-hour programming block of cartoons hosted by cowboy hand puppets Haas and Lil' Jo (a Bonanza pun). While working on this show, Matt and Adam were usually heavily intoxicated and the two eventually got reprimanded for lighting one of the prop sets on fire.[3]

Timeline for Facebook Pages: THE COMPLETE GUIDE Whether you like it or not, the Timeline format is coming to Facebook Pages, and you have until March 30th to figure it out. If you’re lost and you don’t know what Timeline is or how it works, don’t worry – I’m here to break it down and make it easy for you to understand. Why does any of this matter? Because Facebook is still huge for online business, blogging and driving a ton of traffic. It is consistently my #1 referring website (click here to see the last 90 days), and even through I wasn’t too keen on the changes at first, a lot of the new features for Pages really excite me. Here’s my new Facebook Page after switching to Timeline.

vanderwal.net This page is a static permanent web document. It has been written to provide a place to cite the coinage of folksonomy. This is response the request from many in the academic community to document the circumstances and date of the creation of the term folksonomy. The definition at creation is also part of this document. This document pulls together bits of conversations and ideas I wrote regarding folksonomy on listserves, e-mail, in my blogs and in blog comments on other's sites in 2004.

Comparison of browser synchronizers The following tables compare general and technical information for a number of web-based browser synchronizers . Please see the individual products' articles for further information. This article is not all-inclusive or necessarily up-to-date. Satoshi Kon Satoshi Kon (今 敏, Kon Satoshi?, October 12, 1963 – August 24, 2010[3]) was a Japanese film director, animator, screenwriter and manga artist from Kushiro, Hokkaidō and a member of the Japanese Animation Creators Association (JAniCA).[4] He was a graduate of the Graphic Design department of the Musashino Art University. He is sometimes credited as "Yoshihero Wanibuchi" (鰐淵良宏, Wanibuchi Yoshihiro?) in the credits of Paranoia Agent. He was the younger brother of guitarist and studio musician Tsuyoshi Kon. Biography[edit]

Graphing Calculator Untitled Graph Create AccountorSign In π functions θ Distributed social network The Electronic Frontier Foundation, a U.S. legal defense organization and advocacy group for civil liberties on the Internet, endorses the distributed social network model as one "that can plausibly return control and choice to the hands of the Internet user" and allow persons living under restrictive regimes to "conduct activism on social networking sites while also having a choice of services and providers that may be better equipped to protect their security and anonymity".[2] Comparison of software and protocols [edit] From a societal perspective, one may compare this concept to that of social media being a public utility. Notes and references[edit] See also[edit]

Folksonomy An empirical analysis of the complex dynamics of tagging systems, published in 2007,[8] has shown that consensus around stable distributions and shared vocabularies does emerge, even in the absence of a central controlled vocabulary. For content to be searchable, it should be categorized and grouped. While this was believed to require commonly agreed on sets of content describing tags (much like keywords of a journal article), recent research has found that, in large folksonomies, common structures also emerge on the level of categorizations.[9] Accordingly, it is possible to devise mathematical models of collaborative tagging that allow for translating from personal tag vocabularies (personomies) to the vocabulary shared by most users.[10] Origin[edit]