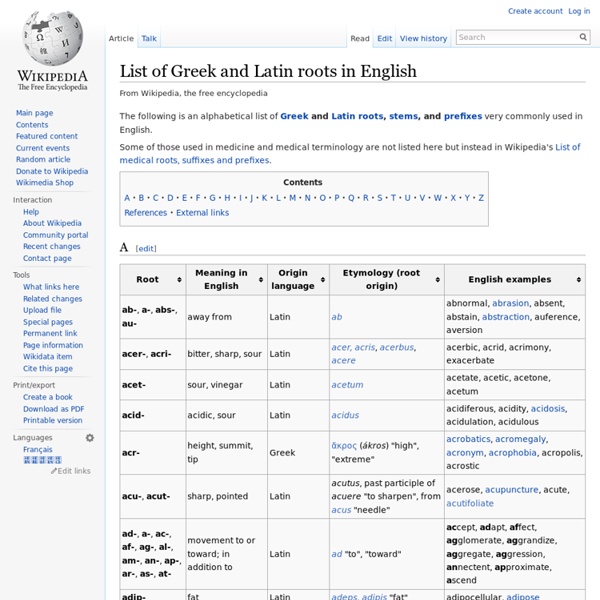 Wordorigins.org Latin and Greek Word Elements English is a living language, and it is growing all the time. One way that new words come into the language is when words are borrowed from other languages. New words are also created when words or word elements, such as roots, prefixes, and suffixes, are combined in new ways. Many English words and word elements can be traced back to Latin and Greek. Often you can guess the meaning of an unfamiliar word if you know the meaning. A word root is a part of a word. Information Please® Database, © 2012 Pearson Education, Inc. More on Latin and Greek Word Elements from Infoplease: Crossword Puzzle Guide - Get tips for solving puzzles, a history of the crossword, word lists and more.Come Under - Come Under (To).

Etymologically Speaking... From the old Arabic word "hashshshin," which meant, "someone who is addicted to hash," that is, marijuana. Originally refered to a group of warriors who would smoke up before battle. Aaron White adds: You may want to explore the fact that the hashshshins were somewhat of a voodoo-ized grand conspiracy scapegoat cult (the very fact of their existence is impossible to confirm). Paul Graham adds: The assassins were a sect of warriors who controlled a number of fortified towns in Persia for about 200 years. From "thaler" -- a nickname for the silver coins that were minted from the ore found in Joachimsthal ("Saint Joachim's Valley" in German), Bohemia (part of the current Czech Republic) -- which gained "currency" (pun not intended) shortly after the lode's discovery in 1516. R.

semantic drift The tendency of the meaning of words and phrases to change over time. The word "nice", for example, is a compliment meaning pleasant, friendly, or sweet; its original meaning, a few hundred years ago, was closer to "stupid". (Webster1913 says it meant "foolish; silly; simple; ignorant; also, weak; effeminate.") This phrase is used by linguists and philologists to mean that words don't mean the same as they used to. European Maps Showing Origins Of Common Words U.S. playwright Rita Mae Brown said: "Language is the road map of a culture. It tells you where its people come from and where they are going." That quote comes to mind looking at these fascinating European etymology maps of various commons words posted by reddit user sp07, which provide a kind of cultural commentary on Europe. The word for "church" shows the influence of ancient Greece: imgur/u/Bezbojnicul "Bear" appears to be influenced by Russia, where largest brown bear population in Europe can be found. Another reddit user noted that "pi" is a prefix for "beer" in several European countries while the "pi" in the Mandarin Chinese word for beer, 啤酒 pi jiu, is a loan word from Europe. "Apple" has a lot of diversity: Notice how the word in Finland and Estonia may come from a Indo-Iranian origin. "Orange" is an interesting one. "Garoful," the ancient Greek word for "rose," only remains in northeastern Italy. imgur/u/Bezbojnicul

Can a woman be sexist? Can a black person be racist? Short answer: it depends on your definitions, and these questions risk missing the point; most accusations of sexism and racism against women and non-white people are spurious. Longer answer: What do 'sexism' and 'racism' mean? These words mean different things to different people. I'm going to start by doing something which I know annoys people in arguments about politics, and refer to dictionary definitions. sexism noun contempt shown for or discrimination against a particular sex, usually by men of women, based on prejudice or stereotype. racism noun 1 hatred, rivalry or bad feeling between races. 2 belief in the inherent superiority of a particular race or races over others, usually with the implication of a right to be dominant. 3 discriminatory treatment based on such a belief. By these definitions, obviously women can be sexist against men and black people can be racist against white people. So there is a case for thinking about power whenever we think about racism and sexism.

Getting English words, word lists, word knowledge, vocabulary words, and indexes of science and technology terms with vocabulary quizzes or word tests for learning English vocabulary What loan words say about a society absence of a word indicates a lack of need or a failure to consider the subject. when i first arrived in japan, i noticed a distinct usage of the english word zero. this conveyed to me that before interracial communications where established, the japanese had a very simplistic concept of mathematics. a zero is required for almost all math's more advanced than integer counting. i later discovered that my surprise was unjustified, they did have a zero (rei). the question of loan words was, however, raised. so i kept my ears open for examples. nb: not all loan words are english based, but as i don't speak any other language, recognition of such is difficult. nb2: this is a far from comprehensive list. further examples can be found around here. my point is to demonstrate what language use signifies of a society. not the brutalization of english by the japanese, that is covered in other nodes. terebi (television) - okay, this is a product of modern(?) and finally.... menage a trois - thank you!