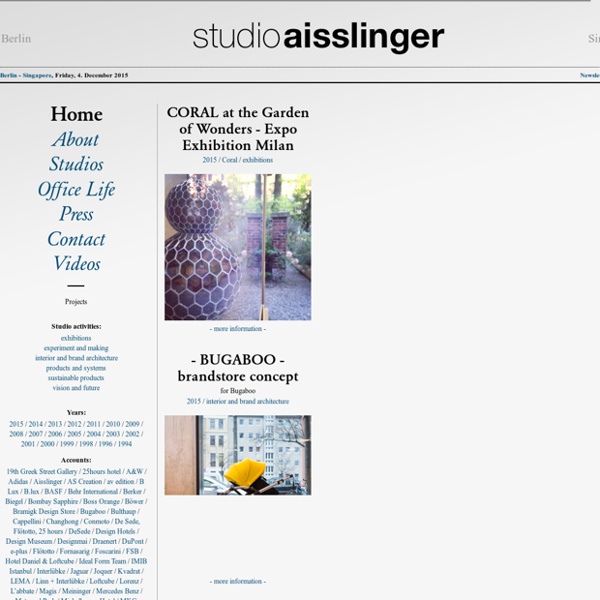 LAN Architecture Home - Fondazione Vico Magistretti Gestalten There are few design studios worldwide that can deliver projects of such consistently high quality as the Japanese studio Nendo. Expertly melding architecture and interior, product, and graphic design with sculpture and installation, Nendo’s work is both impressively clear and intriguingly sophisticated. The functionality and unobtrusiveness of their projects is in line with established Japanese design traditions, yet their lightheartedness and humor is also inspired by the country’s pop culture. Architecture News - World Architects + Buildings The Official Site of Raymond Loewy Fabrica Team: Objet Préféré A knife, train journeys, a jewel, a beer glass and books are just some of the revealing objects that have inspired Objet Préféré, a unique collection of 15 pieces of furniture created following a workshop between young Fabrica designers and personnel – craftsmen, technicians, office staff – of the Grand-Hornu Images cultural centre in Belgium. An intense and rewarding week of exchanges, brainstorming, interviews and photographic sessions on the theme “Favourite Object”, which led to the creation of 15 pieces of furniture that represent a perfect fusion between the creative and design talent of young artist-researchers from the Benetton Group’s communication research centre, and the expert skills of Grand-Hornu technicians. "During the workshop realised by the young international designers of Fabrica, the members of the team of Grand-Hornu responded to the simple question "What is your favourite object?". Words: Courtesy of Fabrica Photos: Gustavo Millon

Ettore Sottsass: Un piccolo omaggio a Mondrian This may be the last series of furniture that Ettore Sottsass ever designed before his death in 2007 but he instilled it with the same burst of colour and energy that defined his prolific career. Produced in editions of just six, the cabinets are now on show for the first time at Friedman Benda gallery in New York. The Italian designer (1917 - 2007) never went in for pared-down design. Memphis Group A collection of objects by Memphis The Memphis Group was an Italian design and architecture group founded in Milan by Ettore Sottsass in 1981 that designed Post Modern furniture, fabrics, ceramics, glass and metal objects from 1981 to 1987.[1] The Memphis group's work often incorporated plastic laminate and was characterized by ephemeral design featuring colourful decoration and asymmetrical shapes, sometimes arbitrarily alluding to exotic or earlier styles.[2] Origins[edit]