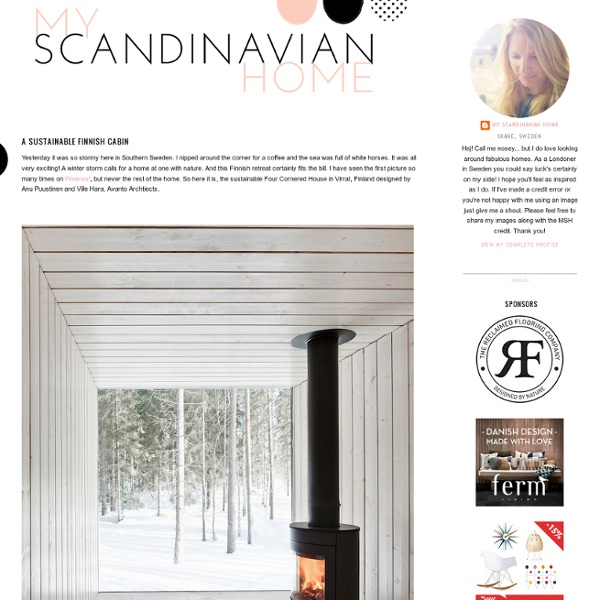 Good morning! I hope you had a lovely weekend (and enjoyed my rare Sunday home tour). It's so gloomy here in Southern Sweden today but it's OK because I've a beautiful project to share! 'House For Mother' (great name?), is the brainchild of Förstberg Arkitektur as their contribution to the Linköpingsbo 2017 housing exhibition. While the outside will be constructed of raw corrugated aluminium, the inside will be designed using exposed timber and walls lined with plywood to add warmth.

Related:  To read in spare time

Wisdom for Startup Growth, From 5 People Who've Been There Running a mid-sized business or managing a team of employees requires unbelievable patience, understanding, forethought and vision — and some of the most successful leaders will tell you that acquiring these traits does not come easily. Problems are bound to arise. It's inevitable for business leaders to be faced with questions: "How should our business adapt through expansion?"

Le voyage créatif This July I met up with Annette Joseph in her amazing apartment in Italy for a little summer get-together with cooking, eating and dancing on the agenda. If you know Annette Joseph from before, then you know she knows how to throw a party and make it all look oh-so effortlessly, she is a food and lifestyle stylist after all with years of experience under the belt for magazines such as Better Homes and Gardens, and is an lifestyle and entertainment expert on the Today show. My lucky part was to be able to watch her work her magic up close and personal, enjoy heartfelt and fun conversation along the way, and play with my camera. It was such a treat to spend time in her company. It´s always so inspiring to have conversations between women, to hear their life wisdom, how they make their relationship work after many years of marriage, to listen to their life stories and to learn from their creative journey, how they began their career to where they are now.

7 Difficult Challenges Successful People Overcome - CAREER GIRL DAILY The impact a challenge has is completely down to the person facing it. If taken negatively a challenge can often be associated with defeat, but the most successful people will take a challenge in their stride and even manage to use it to their advantage. It is a fact of life that everyone will face challenges, no matter how powerful they may be, but how you take that challenge on is what is important. Successful people are often defined by what they have overcome, and these 7 challenges provide the perfect example of the difficulties that they will have faced. #1 The Opinion of Others 8 Undeniable Reasons Why Every Career Girl Should Take Notes From Kim Kardashian - CAREER GIRL DAILY Okay so we hear you, Kim Kardashian-West became a household name thanks to a sex tape. How many entrepreneurs and business women can say that? Not many, I bet. And although a lot of us are quick to point out that it’s not a great foundation to build your reputation on, Kim’s kind of managed to work that in her favour.

Rory Sutherland knows how to save marketing This article was taken from the June 2013 issue of Wired magazine. Be the first to read Wired's articles in print before they're posted online, and get your hands on loads of additional content by subscribing online. "In the distant future I see open fields for far more important researches. Psychology will be based on a new foundation, that of the necessary acquirement of each mental power and capacity by gradation."

Michael B. Jordan on Hustling in Hollywood Photos: Michael B. Jordan: How to Dress Down for the Weekend Michael B. Jordan moved out to Los Angeles nine years ago, when he was 19, to see whether he could convert a teenage acting career into something that would last. These artworks perfectly sum up London’s housing woes In case you have been living under a rock for the last few years, you will probably be aware that the housing situation in London has become an issue that will define the capital for generations to come. It is surely only a matter of time before an actual space living under a rock in central London is advertised on Zoopla for over £500 a month. This week, a particularly shocking report by New London Architecture revealed that as many as 50 per cent of Londoners renting in the private sector are living in poverty.

Jesse Williams: 'Celebrity culture? I am not going to participate in that' There is a heatwave making its way through Los Angeles. It’s the second week of September yet temperatures remain at 32C (89F). At 8am, most of the city is still asleep or just waking up, while surfers at Venice Beach have already spent hours searching for the perfect wave.

The Women of Hollywood Speak Out Colin Trevorrow’s Hollywood fairy tale started at the Sundance Film Festival in 2012. The bespectacled, bearded director, then 35, came to Park City, Utah, with an endearingly quirky time-travel romantic comedy executive-produced by the endearingly quirky Duplass brothers, Mark and Jay, and starring Mark. The $750,000 indie film, ‘‘Safety Not Guaranteed,’’ went on to make $4 million in theaters. The young director soon found a mentor in Brad Bird, who became famous at Pixar directing ‘‘The Incredibles’’ and ‘‘Ratatouille.’’