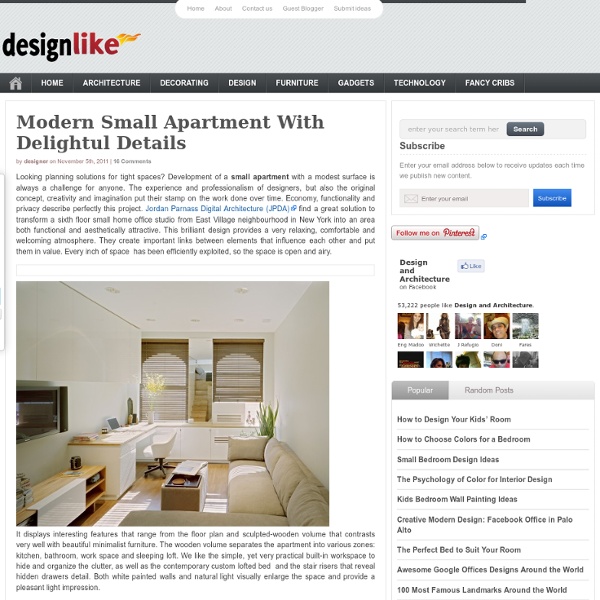 Advertisement Looking planning solutions for tight spaces? Development of a small apartment with a modest surface is always a challenge for anyone. The experience and professionalism of designers, but also the original concept, creativity and imagination put their stamp on the work done over time. Economy, functionality and privacy describe perfectly this project. Jordan Parnass Digital Architecture (JPDA) find a great solution to transform a sixth floor small home office studio from East Village neighbourhood in New York into an area both functional and aesthetically attractive. It displays interesting features that range from the floor plan and sculpted-wooden volume that contrasts very well with beautiful minimalist furniture. Design Team: Jordan Parnass, Darrick Borowski, Danny Orenstein, Sean KarnsPhotography: Frank Oudeman, Sean Karns

The World’s 10 Coolest Car Parks The World's 10 Coolest Car Parks Parking garages generally have a bad reputation - particularly now that cars are seen as such an environmentally unfriendly way to travel, not to mention the fact that they are often unattractive utilitarian structures. To counteract this common perception, the website Stress Free Airport Parking has launched an award for the World's Coolest Car Park.

Chocolate Chip Cookie Dough Peanut Butter Cups Soooooo… you know that episode of Sex and the City where Miranda has to dump dish soap on top of chocolate cake just so she will stop eating it?? Uh. Yeeeeeah. These are like… of that caliber. And that totally almost happened to me. You PROBably should not make these if you are home alone for four days.

Less is the New More: Making the Most of Small Spaces Good Design For Living in Small ApartmentsAs people migrate to smaller spaces, good design helps a lot. This is something they figured out in Europe long ago, that if you don't have a lot of horizontal room you can go vertical. Tumidei in Italy makes some of the nicest stuff, like this unit with lots of storage under the bed. 25 Spectacular Movies You (Probably) Haven't Seen Pt. 2 Human Traffic Very unique comedy about the drug/club culture in the UK. Five friends ponder society, drug use and their own lives as they go about their usual weekend of snorting, smoking, popping, dancing and sex. The Matador Attic Loft Apartment In Prague The design of this modern loft conversion located in Prague, Czech Republic uses natural materials such as stone, brick and wood to enhance the flat and angular surfaces. Designed by architect Dalibor Hlavacek, the two-storey attic loft makes good use of limited floor space. The living room, kitchen, bedroom and bathroom are on the lower floor.

SpY Transforms Vine-Covered Wall Into Beautiful Botanical Graffiti SPY Green Graffiti - Gallery Page 7 Spanish artist SpY enlivened a vacant wall in Besancon, France with a geometric feat of botanical graffiti! The urban artist's careful pruning gave a vagrant patch of vines a new circular shape, turning the site into a living artwork that locals now take pride in preserving. SpY’s gorgeous living artwork is made from strands of leafy vines that once reached upward toward the sun in unkempt spurts. Seeing these wild vines as a canvas, SpY hired a cherry picker manlift and started to carve a circular shape into the far reaches of the overgrowth. Careful to maintain the main branches, he slowing trimmed away the wild vines to form a perfect circle.

The microhydro plant My little paradise has a stream that provides enough water flow and head to run a small turbine, to provide electricity to my home. While writing this, the microhydro plant is being implemented, and here are some photos of the process. Since I usually like to start at the end, the first thing I built is the controller: It is an implementation of Jan Portegijs' "Humming Bird", with some changes and adaptations. Modern Kitchen Design: All-in-One Cooking Island Idea What if you reversed your normal understanding of a kitchen, with space in the middle and surfaces, storage and so forth all around the outside? This modern kitchen design concept by 3 Chinese designers takes the notion of a central island and makes it a focal point for communal cooking. This all-in-one kitchen core serves every single function you could want out of a kitchen but also employs clever space-saving design strategies and yields mobile, modular and multifunctional benefits. Cupboards and surfaces can be rotated as needed for everyone to access and design as a whole combines washing, mixing and cooking while keeping each function separate within the circle. A combination lighting system and vent hood is position above the island centerpiece and contains cabinets that likewise pivot on a central axis.

15 Ways to Get Past an Awkward Moment Aug 13, 2012 We’ve all been in awkward situations, our lives are full of them. Nobody’s perfect, but how you handle it can turn an awkward moment into a partial win. Below you will see 15 awkward situations and what these people did to try and turn it around.