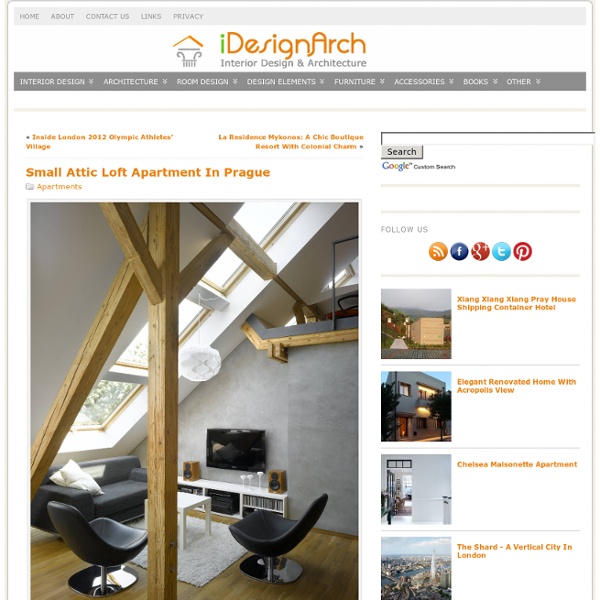 The design of this modern loft conversion located in Prague, Czech Republic uses natural materials such as stone, brick and wood to enhance the flat and angular surfaces. Designed by architect Dalibor Hlavacek, the two-storey attic loft makes good use of limited floor space. The living room, kitchen, bedroom and bathroom are on the lower floor. Via: ArchDaily

Idéias criativas Janela SEAT Redesign your window to create a cozy corner to curl up in the sun. What would you wish for? For the second part here A dream treehouse I've always wanted a treehouse when I was a child but living in a city made it a little difficult. Instead, we would built forts, tents or just crawl under the bed to play. It's weird right now but back then we really loved having those hideouts where nobody could find us. We could stay there for as long as we wanted. But what happens if you're an adult and still dream of a treehouse? I did a little web research for treehouses all over the world and oh my what I found. Safe Arbor in Switzerland. Trillium. The enchanted forest. A modern, pitched roof treehouse. A treehouse morning. A dream treehouse. Those are just a few of many treehouses.

Tips & Tutorials | 3D Artist - Part 6 Looking for disc files? Click here This week we're taking a look at using lighting and filters in Mudbox to preview how an external render will look. To celebrate the recent reveal of Vue 11 we're taking a look at creating moss-covered rocks with the software For this Monday’s tutorial we’re going to look at creating realistic demolition effects using 3ds Max plug-in RayFire. For this Monday's tutorial we're going to look at creating a slimy, oil-covered character in ZBrush. Kurt Papstein leads a fantastic step-by-step tutorial in issue 47 – here's a taster of what's in store… For this Monday's tutorial we take a look at how to rig the wings of a dragon using Maya. Starting today, we're going to post a free tutorial every Monday! Escape Studios free tutorial is directed at budding compositors looking to improve their fluency in NUKE

Design de Interiores e produtos para decoração | Arkpad National Geographic Photo Contest 2011 - In Focus National Geographic is currently holding its annual photo contest, with the deadline for submissions coming up on November 30. For the past nine weeks, the society has been gathering and presenting galleries of submissions, encouraging readers to vote for them as well. National Geographic was kind enough to let me choose among its entries from 2011 for display here on In Focus. Use j/k keys or ←/→ to navigate Choose: Many people pilgrimage to Uluru, but what is seen there often depends on where you've come from. Eruption of the Cordon del Caulle. Beluga whales in the arctic having fun. This is a streetcar in New Orleans traveling back towards The Quarter on St. This image captures almost 6 hours of climbing parties on Rainier going for the summit under starry skies. Russia, polar region of West Siberia, Tazovsky Peninsula. An adult male gelada rests in the early morning light after ascending the steep sleeping cliffs of the Simien Mountains, Ethiopia. This place is very special to me.

Living Spaces: Inspiration set 1 This year is going to be huge for Designcollector as we just entered our 10th Year of online existence. During the New Year I was thinking to go beyond normal posts and focus on what we love to do – collect things under different categories. So we start the year with 1st Inspiration set of Living Spaces or simply great Interior Design examples (mostly done in Rustic, minimalists and industrial style) collected in our Pinterest View all sets PSOFT WEBSITE - Pencil+ 3 Pencil+ 3 is a non-photorealistic shader plug-in for 3ds Max that produces pencil sketch-like strokes. It produces images that look like pen drawings or color pencils as well as flat presentations similar to animation cels. High Level Expressiveness You can reproduce in 3D the distinctive art style of Japanese animation and illustrations. The modifier functions newly introduced in Pencil+ 3 make it possible to create effects that are difficult to achieve in 3D, such as incorrect shading for solid objects or bold scenographic effects through extreme perspective deformations. Pencil+'s unique non-photorealistic expression is also useful to produce explanatory figures that help simplify and convey the main point of an explanation. Beautiful Line Drawings ”Lines”: They are essential for non-photorealistic rendering. Graphical Interface Pencil+'s interface is designed to be graphical and easy to use.

Maisonette convertible furniture series is perfect for smaller homes Portable and convertible furniture became kind of outdated when video chat and virtual hangouts replaced having friends over to one’s backyard. But that doesn’t mean that the market for minimalist, purely functional furniture has vanished. Today, these kinds of furniture items are used to make small-space living more comfy for apartment dwellers. Simone Simoncelli, Italian furniture and product designer extraordinaire, has used the needs and wants of such clients to fashion her highly stylish and practical Maisonette series. The name of the furniture range literally translates into ‘little home’ and that is precisely what the multifunctional furniture series aims to fit into. Each of the three pieces of minimalist furniture in the Maisonette series has been given a dual function to enhance its functionality.