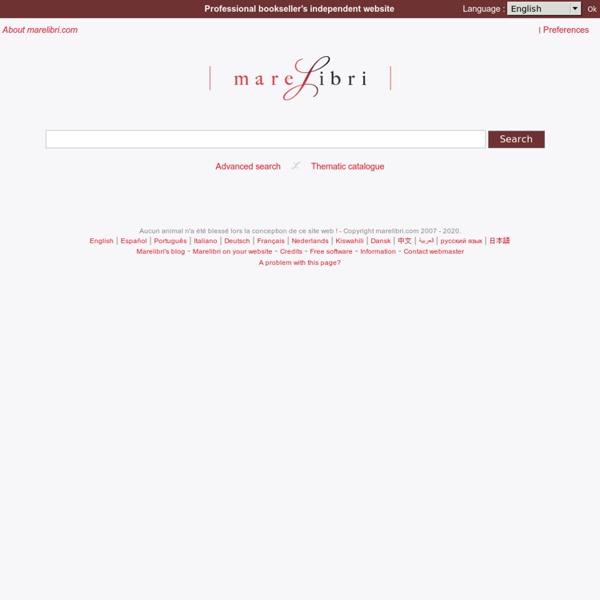 Art and complexity - Google Kitaplar togejire的部落格 :: 痞客邦 PIXNET :: www.geuthner.com Urban Dictionary, August 19: bathroom stalking Building Dynamic Websites / OpenCourseWare This is OpenCourseWare. Computer Science E-75 is a course at Harvard Extension School. Even if you are not a student at Harvard, you are welcome to "take" this course via cs75.tv by following along via the Internet. (The course's own website is at www.cs75.net.) If you're a teacher, you are welcome to adopt or adapt these materials for your own course, per the license. Special thanks to Chris Thayer and Harvard Extension School for the course's videos. djm Copyright © 2010 – 2016, David J. This course's content is licensed by David J. you are free: to Share — to copy, distribute, and transmit this content to Remix — to adapt this content under the following conditions: Attribution — You must attribute this content to David J.

Bienvenue sur le site de la librairie Antinoë | Librairie Antinoë Robert Frost - Books, Biography, Quotes Robert Frost (1874-1963) was born in San Francisco, California. His father William Frost, a journalist and an ardent Democrat, died when Frost was about eleven years old. His Scottish mother, the former Isabelle Moody, resumed her career as a schoolteacher to support her family. The family lived in Lawrence, Massachusetts, with Frost's paternal grandfather, William Prescott Frost, who gave his grandson a good schooling. In 1892 Frost graduated from a high school and attended Darthmouth College for a few months. From 1897 to 1899 Frost studied at Harvard, but left without receiving a degree. In 1912 Frost sold his farm and took his wife and four young children to England. While in England Frost was deeply influenced by such English poets as Rupert Brooke. In 1920 Frost purchased a farm in South Shaftsbury, Vermont, near Middlebury College where he cofounded the Bread Loaf School and Conference of English.

University of Michigan | Open.Michigan Do not stand at my grave and weep Do Not Stand at My Grave and Weep is a poem written in 1932 by Mary Elizabeth Frye. Although the origin of the poem was disputed until later in her life, Mary Frye's authorship was confirmed in 1998 after research by Abigail Van Buren, a newspaper columnist.[1] Full text[edit] Do not stand at my grave and weep, I am not there; I do not sleep. I am a thousand winds that blow, I am the diamond glints on the snow, I am the sunlight on ripened grain, I am the gentle autumn rain. When you awaken in the morning’s hush I am the swift uplifting rush Of quiet birds in circled flight. I am the soft stars that shine at night. Do not stand at my grave and cry, I am not there; I did not die. Origins[edit] Mary Frye, who was living in Baltimore at the time, wrote the poem in 1932. Mary Frye circulated the poem privately, never publishing or copyrighting it. The poem was introduced to many in Britain when it was read by the father of a soldier killed by a bomb in Northern Ireland. BBC poll[edit] ... Rocky J.

12 great free online courses Much ado has been made in recent years over the quickly rising cost of healthcare in the United States. But the cost of college tuition and fees has skyrocketed at nearly twice that rate. Going to college today will cost a student 559% more than it did in 1985, on average. In an exciting talk given at TEDGlobal 2012, Stanford professor Daphne Koller explains why she was inspired — alongside fellow professor Andrew Ng — to create Coursera, which brings great classes from top universities online for free. Coursera classes have specific start dates, require students to take quizzes and turn in assignments, as well as allowing professors to customize their course into online chunks rather than simply recording their lectures. Even outside of Coursera, the number of college classes available on a computer screen rather than in a brick-and-mortar lecture hall is staggering. Inspired by Young, below, find 12 courses you could take for a completely free TED degree in Big Ideas.