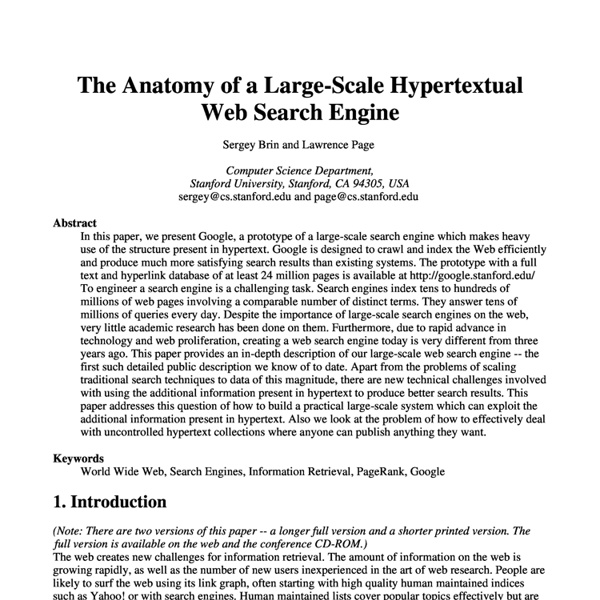 Twitter's original drawing SweoIG/TaskForces/CommunityProjects/LinkingOpenData - ESW Wiki News 2014-12-03: The 8th edition of the Linked Data on the Web workshop will take place at WWW2015 in Florence, Italy. The paper submission deadline for the workshop is 15 March, 2015. 2014-09-10: An updated version of the LOD Cloud diagram has been published. The new version contains 570 linked datasets which are connected by 2909 linksets. Project Description The Open Data Movement aims at making data freely available to everyone. The goal of the W3C SWEO Linking Open Data community project is to extend the Web with a data commons by publishing various open data sets as RDF on the Web and by setting RDF links between data items from different data sources. RDF links enable you to navigate from a data item within one data source to related data items within other sources using a Semantic Web browser. The figures below show the data sets that have been published and interlinked by the project so far. Clickable version of this diagram. Project Pages Meetings & Gatherings See Also Demos 1. 2.

Derrick de Kerckhove Derrick de Kerckhove (born 1944) is the author of The Skin of Culture and Connected Intelligence and Professor in the Department of French at the University of Toronto, Canada. He was the Director of the McLuhan Program in Culture and Technology from 1983 until 2008. In January 2007, he returned to Italy for the project and Fellowship “Rientro dei cervelli”, in the Faculty of Sociology at the University of Naples Federico II where he teaches "Sociologia della cultura digitale" and "Marketing e nuovi media". Background[edit] De Kerckhove received his Ph.D in French Language and Literature from the University of Toronto in 1975 and a Doctorat du 3e cycle in Sociology of Art from the University of Tours (France) in 1979. Publications[edit] He edited Understanding 1984 (UNESCO, 1984) and co-edited with Amilcare Iannucci, McLuhan e la metamorfosi dell'uomo (Bulzoni, 1984) two collections of essays on McLuhan, culture, technology and biology. Other works[edit] References[edit]

The original proposal of the WWW, HTMLized A hand conversion to HTML of the original MacWord (or Word for Mac?) document written in March 1989 and later redistributed unchanged apart from the date added in May 1990. Provided for historical interest only. The diagrams are a bit dotty, but available in versioins linked below. The text has not been changed, even to correct errors such as misnumbered figures or unfinished references. This document was an attempt to persuade CERN management that a global hypertext system was in CERN's interests. Other versions which are available are: ©Tim Berners-Lee 1989, 1990, 1996, 1998. This proposal concerns the management of general information about accelerators and experiments at CERN. Overview Many of the discussions of the future at CERN and the LHC era end with the question - ªYes, but how will we ever keep track of such a large project? Losing Information at CERN CERN is a wonderful organisation. A problem, however, is the high turnover of people. Where is this module used? Fig 1. Fig 2.

OnDemand - Open Source Collaborative Networking for Intranets an A collaborative help system that finally gives your customers and agents the knowledge they need in real time MindTouch® is a cloud based self-service help center and a knowledge-as-a-service platform that prevents support requests and improves your existing customer support systems. For the first time, you can update and deliver product knowledge in real-time, everywhere and across all channels minimizing support requests. Track your customer behavior with web analytics and MindTouch content analytics to improve your product help content, product strategy, customer success programs and customer retention while simultaneously lowering your support costs. Speed – Deploy faster. Effortless Authoring and Publishing using the LightSpeed Framework The MindTouch LightSpeed Framework makes publishing and authoring quick and effortless for all your constituents. Product Portfolio, Product Guides, and User Guides associate your content quickly and intelligently. Machine learning optimization.

MediaWiki Linked Data An introductory overview of Linked Open Data in the context of cultural institutions. In computing, linked data (often capitalized as Linked Data) describes a method of publishing structured data so that it can be interlinked and become more useful. It builds upon standard Web technologies such as HTTP, RDF and URIs, but rather than using them to serve web pages for human readers, it extends them to share information in a way that can be read automatically by computers. This enables data from different sources to be connected and queried.[1] Tim Berners-Lee, director of the World Wide Web Consortium, coined the term in a design note discussing issues around the Semantic Web project.[2] Principles[edit] Tim Berners-Lee outlined four principles of linked data in his Design Issues: Linked Data note,[2] paraphrased along the following lines: All kinds of conceptual things, they have names now that start with HTTP.I get important information back. Components[edit] European Union Projects[edit]

FOAF (software) Semantic Web ontology to describe relations between people The FOAF project, which defines and extends the vocabulary of a FOAF profile, was started in 2000 by Libby Miller and Dan Brickley. It can be considered the first Social Semantic Web application,[citation needed] in that it combines RDF technology with 'social web' concerns.[clarification needed] FOAF is one of the key components of the WebID specifications, in particular for the WebID+TLS protocol, which was formerly known as FOAF+SSL. @prefix rdf: < . Linked Data - Design Issues Up to Design Issues The Semantic Web isn't just about putting data on the web. It is about making links, so that a person or machine can explore the web of data. With linked data, when you have some of it, you can find other, related, data. Like the web of hypertext, the web of data is constructed with documents on the web. However, unlike the web of hypertext, where links are relationships anchors in hypertext documents written in HTML, for data they links between arbitrary things described by RDF,. Use URIs as names for things Use HTTP URIs so that people can look up those names. Simple. The four rules I'll refer to the steps above as rules, but they are expectations of behavior. The first rule, to identify things with URIs, is pretty much understood by most people doing semantic web technology. The second rule, to use HTTP URIs, is also widely understood. The basic format here for RDF/XML, with its popular alternative serialization N3 (or Turtle). Basic web look-up or in RDF/XML