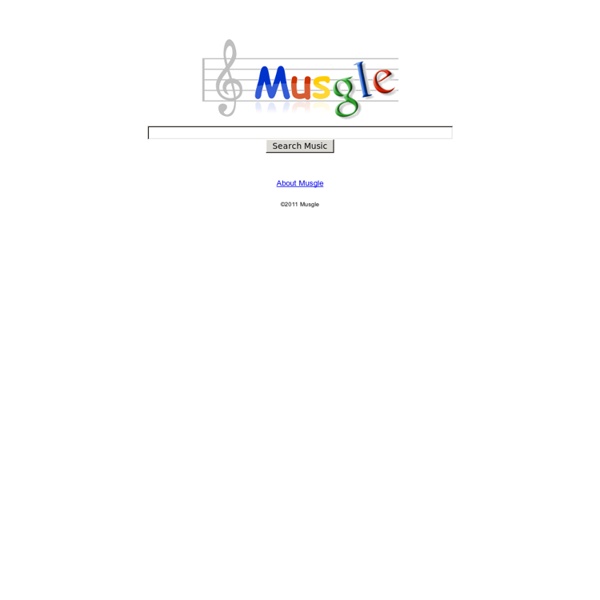 Musgle originates from the idea of combining words Music and Google. The idea is simple yet very powerful. To see Musgle in action just type a song title, or the artist name, or both in a search bar and hit 'Enter' - you will be redirected to the Google page with relevant search results. Click on one of those results, and you will have a chance to directly download the song you are searching for - very smooth! Although Musgle is not affiliated with Google, ALL its strength comes from it :) When searching for any kind of music (mp3, wma, wav, etc), Musgle calls Google for help by submitting a special search query to it, which is based on Advanced Google Search Operators. After Google does its hard work, it returns results with direct links to mp3, wma, wav, etc.. music files that can be downloaded directly with no hassle!

7 Image Search Tools That Will Change Your Life by Maria Popova What martinis have to do with reverse art lookup and obscure German calendars from the 1990’s. Although Google has been playing with some fun image search toys in its lab and the official Google Image Search has recently significantly upped its game, some of its most hyped features — color search, instant scrolling, hover preview — are but mere shadows of sleeker, better versions that geekier, more sophisticated image search tools offer. Here are seven of our favorites. oSkope is a visual search assistant that lets you browse images and products from popular sites like Amazon, eBay, YouTube and Flickr in a highly intuitive way. You can skim thumbnails related to your search keywords and save search results from different services to a visual bookmark bar at the bottom of your browser screen.

“Music Philosophy”, combining music and graphics “Music Philosophy” is an interesting project that combines music and graphics. The designer called Mico used the lyrics of a song known by a group or artist that he likes, to make colorful and creative posters. The songs are from The Beatles, Bob Dylan, Pearl Jam and several other famous musicians. You should also take a look at how portraits of these iconic musicians look like when they are made from cassete tape. a Beat Box History of Hip Hop VIRAL VIDEO SELECTION Big Ups to EKLIPS This is a Commercial. An Amazing, Amazing Commercial. Viral Video is a periodic series we run celebrating music and moving images. Today we give you the most amazing live-recorded television spot ever.

The Best Sites for Royalty Free Stock Music and Sound Effects - StumbleUpon You can't have video without audio... it just doesn't work. That's why in high school it was A/V club, not just V Club... although that does sound pretty rad. Anywho... if you want to complete an animation, short film, commercial or whatever... you have to have good audio, and that means scores and sound effects! I have found some of the best places around the web to purchase packages, find individual songs, and even snag some free tracks for you and your work! AudioJungle AudioJungleWe can't leave out one of our most useful sites on the Envato Network!

One Track Mind: free, legal MP3 downloads Thanks for discovering One Track Mind! Subscribe via email to have each day's song delivered to your inbox. [ download ] His third effort under his own name, Cobirds Unite, is a fitting testimonial to a quarter-century spent writing and recording music. Released by Local 638 Records this past November, the album features a prominent guest vocal role for Visqueen frontwoman Rachel Flotard, as well as contributions from members of acts including Afghan Whigs, Mudhoney, and Screaming Trees. Don’t be fooled by the sound implied by those last three bands, however, as Cobirds Unite is firmly rooted within the traditions of Americana.

100 Free Language Classes Online March 1st, 2010 If you have always wanted to learn a language but were too put off by the high cost associated with most classes, then take a look at all these great opportunities to learn a foreign language online, at no cost to you. With so many learning opportunities online, it is a shame not to take advantage of all that you can, so be sure to spend some time with these classes. Whether you want to learn one of the major world languages or want something a little less popular, there are sure to be lessons here to help you start to speak whatever language you are interested in learning. French If you want to learn French, no matter your experience level, then check out these free classes.

Top 100: Greatest Songs (of All Time) It’s hard to come up with a list of the 100 greatest songs of all time and not leave people out, or be called a “son of a bitch” and other unflattering things by your readers. Nevertheless, inStash goes where not even Rolling Stone magazine has dared to tread. While the famed music publication needed a top 500 to feel comfortable even undertaking such a task, inStash honors the legends of rockers past, country’s greatest crooners, and the songs of today with 100 must-haves for your iPod or MP3 player. Don’t think of this as a top 100 greatest songs so much as a 100 essentials. Ratings themselves are always subjective. This is just inStash’s way of saying that if we could take only a century mark of songs with us through our remaining years, these are the ones we’d pick.

Mixer Beatmixing is a disk jockey technique of mixing two tracks so that the beats of one occur at the same time as the other. Beatmixing was invented in the late 1960s by Francis Grasso, who tried to keep people from leaving the dance floor between the songs. Initially he was looking for records with the same tempo, counting the tempo with a metronome. When the tempos didn't match, he was adjusting the pitch control on the turntable to bring the beats in sync. Rosie, a mixer built for him by Alex Rosner, let him listen to any channel in the headphones independently of what was playing on the speakers, allowing him to beatmatch the records by ear; this became the defining feature of DJ mixers. These days beatmatching and beatmixing are considered basic techniques among DJs in electronic dance music genres, and it's standard practice in clubs to keep the constant beat through the night, even if DJs change in the middle.

The Online Learning Blog from Study2U Supposedly browsing the internet requires more brain power than watching television. Although judging from some of the websites we’ve come across that assumption is cast into doubt. Here’s some of the sites we like that might get your brain to sit up and listen. Ted A conference that started in 1984 bringing together experts in technology, entertainment and design quickly grew into so much more. 47 Sites Every Recording Musician Should Visit In a recent “Open Mic” we asked you, “Which music-related sites do you visit regularly?” This article is a summary of the great suggestions given in the comments to that article. You can make the list even longer by commenting on this article. As you’re reading this article, Audiotuts+ needs no introduction. Rocklist.net...Steve Parker...1001 Albums.. 1001 Albums You Must Hear Before You Die Published in 2005 by Cassell Illustrated. Selected & written by 90 leading international critics, general editor Robert Dimery. In chronological order 1955-2005. Year of release only given here, when considered absolutely necessary. Where there were differences in UK & US (or other) releases for artists, such as the Beatles & the Rolling Stones, the original country of release edition can be taken to be the one listed, unless indicated otherwise.

100 Most Often Mispronounced Words and Phrases in English There are spelling rules in English, even if they are difficult to understand, so pronouncing a word correctly usually does help you spell it correctly. Here are the 100 most often mispronounced English words ("mispronunciation" among them). Several common errors are the result of rapid speech, so take your time speaking, correctly enunciating each word. Careful speech and avid reading are the best guides to correct spelling. Need more help with these common errors? Check out the YourDictionary Battle of the Commonly Misspelled or Misused Words infographic for an easy-to-understand visual explanation of the most commonly confused words.