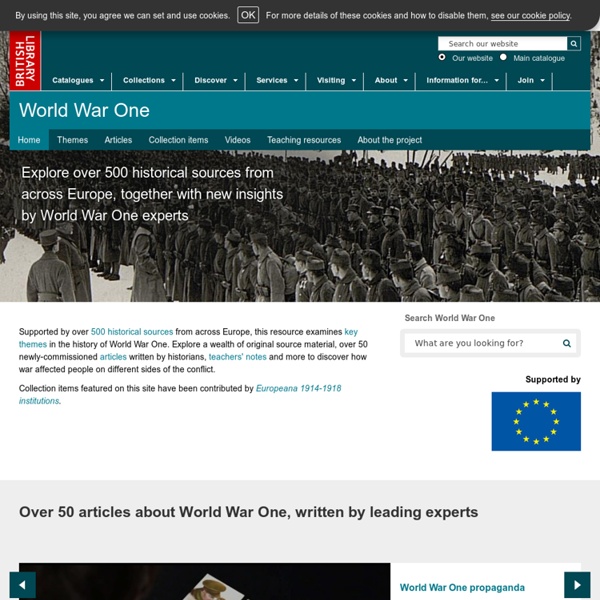 First War War Poetry The First World War Poetry Digital Archive is an online repository of over 7000 items of text, images, audio, and video for teaching, learning, and research. The heart of the archive consists of collections of highly valued primary material from major poets of the period, including Wilfred Owen, Isaac Rosenberg, Robert Graves, Vera Brittain, and Edward Thomas. This is supplemented by a comprehensive range of multimedia artefacts from the Imperial War Museum, a separate archive of over 6,500 items contributed by the general public, and a set of specially developed educational resources. These educational resources include an exciting new exhibition in the three-dimensional virtual world Second Life. Freely available to the public as well as the educational community, the First World War Poetry Digital Archive is a significant resource for studying the First World War and the literature it inspired.

Encyclopedia Britannica Alternate titles: First World War; Great War; WWI World War I, also called First World War or Great War, an international conflict that in 1914–18 embroiled most of the nations of Europe along with Russia, the United States, the Middle East, and other regions. The war pitted the Central Powers—mainly Germany, Austria-Hungary, and Turkey—against the Allies—mainly France, Great Britain, Russia, Italy, Japan, and, from 1917, the United States. It ended with the defeat of the Central Powers. Digital Collection - NZ You are here: Home > Digital Collection > Wars & conflict Heritage Digital Collection Home The Canterbury Aviation (N.Z.) Co.: the first hundred pilots World War I in Photos: Introduction A century ago, an assassin, a Serbian nationalist, killed the heir to the throne of Austria-Hungary as he visited Sarajevo. This act was the catalyst for a massive conflict that lasted four years. More than 65 million soldiers were mobilized by more than 30 nations, with battles taking place around the world. Industrialization brought modern weapons, machinery, and tactics to warfare, vastly increasing the killing power of armies. Battlefield conditions were horrific, typified by the chaotic, cratered hellscape of the Western Front, where soldiers in muddy trenches faced bullets, bombs, gas, bayonet charges, and more. On this 100-year anniversary, I've gathered photographs of the Great War from dozens of collections, some digitized for the first time, to try to tell the story of the conflict, those caught up in it, and how much it affected the world.

WW100 New Zealand A selection of sites and sources for learning about the history of the First World War from a New Zealand perspective, and the role your family members might have played in it. Soldiers inside the YMCA library in Beauvois, France. Ref: 1/2-013635-G. Courtesy of Alexander Turnbull Library, Wellington, New Zealand. Starting Places World War I Fast Facts Here's some background information about World War I, which lasted from 1914 to 1918. Causes of World War I:The assassination of Archduke Franz Ferdinand of Austria-Hungary by a Serbian national leads to Austria-Hungary declaring war on Serbia. Ties and treaties bound countries to assist each other in time of war.

Anzac Day Collection This documentary gave NZ viewers, for the first time, a Turkish view of the Gallipoli story. Produced for TVNZ and Turkish TV, it focuses on four young people, two Turks and two New Zealanders, descended from Gallipoli veterans, as they explore the grim reality of their ancestors’ experience. Six Māori Battalion soldiers camped in Italian ruins wait for night to fall. BBC History - 12 amazing WW1 facts that you probably don't know 3 June 2014Last updated at 14:17 GMT The secret tunnelers of WW1 World War One often conjures up images of a horrific bloodbath fought in the trenches of the Western Front. While this certainly captures some of the reality, did you know that the war spread as far as China? Or that it was fought by servicemen from Asia, North America, the Caribbean, Australasia and Africa?