How Border Drones Were Born During the Vietnam War. When Boris Yeltsin went grocery shopping in Clear Lake - The Texican. Diary of Soviet Ambassador to London Rewrites History of World War II. Cracked. To badly paraphrase Douglas Adams: Anything invented before you are 35 is awesome, but anything that comes around after that is scary. 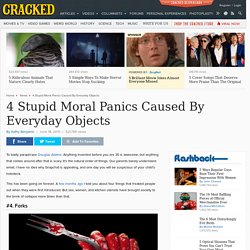 It's the natural order of things. Our parents barely understand email, I have no idea why Snapchat is appealing, and one day you will be suspicious of your child's holodeck. This has been going on forever. A few months ago I told you about four things that freaked people out when they were first introduced. But sex, women, and kitchen utensils have brought society to the brink of collapse more times than that. #4. Robert Klein/iStock/Getty Images There wasn't one general moral panic over the fork so much as a 600-year slow burn of derision. So why did people fear the fork so much? Slate.comTo be fair, it does look a lot deadlier than that knife.

The proof that forks were evil came early. That story was still being told in churches 200 years later. Eventually, forks were introduced to France. This immoral cutlery took even longer to catch on in England. . #3. Berlin in July 1945 (HD 1080p color footage) A Retromatic History of Music (or Love) 8 Things Vietnam War Movies Leave Out (By an Enemy Soldier) Even if your knowledge of the Vietnam War comes exclusively from Hollywood films and Texan textbooks that only refer to it as "that one the good guys lost," you've probably heard about the Viet Cong. 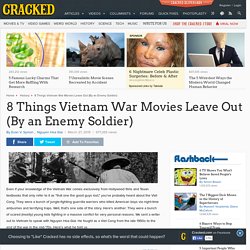 They were a bunch of jungle-fighting guerrilla warriors who killed American boys via night-time ambushes and terrifying traps. Well, that's one side of the story. Here's another: They were a bunch of scared (mostly) young kids fighting in a massive conflict for very personal reasons. We sent a writer out to Vietnam to speak with Nguyen Hoa Giai. He fought as a Viet Cong from the late 1950s to the end of the war in the mid-'70s. . #8. U.S. I became a Viet Cong guerrilla in the late 1950s, when I was 15.

Via Medicinthegreentime.com"Everybody stop the colonial exploitation for a minute and scrunch up! " 5 Ridiculous Cold War Myths You Learned in History Class. The second half of the 20th century was dominated by the world's two remaining superpowers facing each other down. 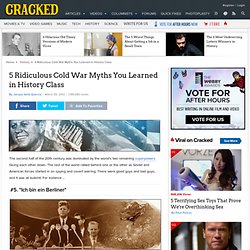 The rest of the world rallied behind one or the other as Soviet and American forces started in on spying and covert warring. There were good guys and bad guys, and it was all bullshit. For instance ... #5. Extra History - World War I: The Seminal Tragedy - Chapter 1: The Concert of Europe. Gorgeous Images Of Central Europe Reveal A Region Teeming In History. The 10 Biggest Misconceptions About the First World War. Railways Just to add to the point of your #2, for Schlieffen's plan to work, the French main force had to be lured into Germany not mainly for the geographic distance from where the German right wing would attack, but because that would get them away from French railheads. 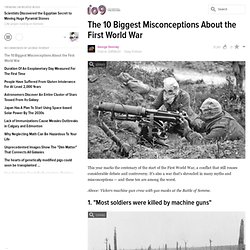 After the introduction of railroads, but before we had mechanized/motorized land forces, the only way to move land forces around quickly was via railroad. The German right wing, in its advance out of Germany through Belgium and into France towards Paris, would necessarily give up that rail mobility, because they would have to cross enemy territory, with its rail lines presumably destroyed by retreating enemy forces, in its drive to Paris. The German left had to be kept weak not mainly to keep its right strong, but mainly so that the French would be able to push deep into German territory and beyond the French rail net. Definitely. The diaries of nearly 4,000 World War One soldiers are now online.

Mohammad Mosaddegh. Mohammad Mosaddegh or Mosaddeq[a] (Persian: مُحَمَد مُصَدِق‎; IPA: [mohæmˈmæd(-e) mosædˈdeɣ] ( );[b] 16 June 1882 – 5 March 1967), was the democratically elected[1][2][3] Prime Minister of Iran from 1951 until 1953, when his government was overthrown in a coup d'état orchestrated by the British MI6 and the American CIA.[4][5] An author, administrator, lawyer, prominent parliamentarian, his administration introduced a range of progressive social and political reforms such as social security, rent control, and land reforms.[6] His government's most notable policy, however, was the nationalization of the Iranian oil industry, which had been under British control since 1913 through the Anglo-Persian Oil Company (APOC / AIOC) (later British Petroleum or BP).[7] Mosaddegh was removed from power in a coup on 19 August 1953, organised and carried out by the CIA at the request of MI6, which chose Iranian General Fazlollah Zahedi to succeed Mosaddegh.[8] Early life[edit] Education[edit] 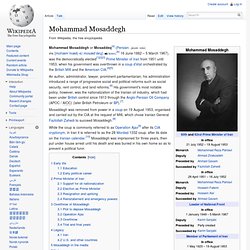 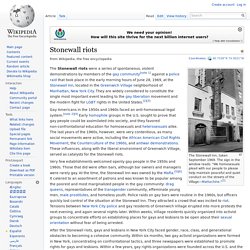 The sign in the window reads: "We homosexuals plead with our people to please help maintain peaceful and quiet conduct on the streets of the Village—Mattachine. What happened to Argentina : AskHistorians. Haxan.