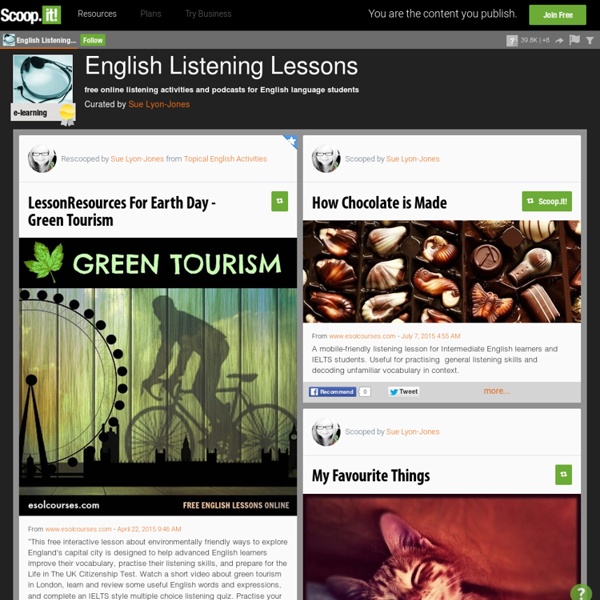 Commonly Used American Idioms - LinkEngPark Home » Series » Watch&Learn » L2: Commonly Used American Idioms American Idioms is a great video series with English subtitles for English learners. All of the explanations are in English, so it might be challenging for you, but just try to imagine the meanings in your head and study hard and soon you’ll be able to use these idioms in your conversations. American Idioms: Like A Rolling Stone Get Your Act Together Easy As Falling Off A Log Heart to Heart Deep SixAre You a Buff About Something? Listen to ESL Podcasts and AudioBooks with Transcript Listen to ESL Podcasts with NotesLearn English from TeachersPractise Your English Online Choose Meaningful Pre-Intermediate, Intermediate, Upper-Intermediate or Advanced Series Source: YouTube More Series for You: L1: BBC The Flatmates L2: VOA American Stories L1: Big City Small World with transcript videos L3: Skins (TV-Series) with English Subtitles Documentary Films with English Subtitles Leave a Reply (required)

VOA Daily World News Transcript Videos Week 31, 2015 - LinkEngPark VOA Daily World News: July 27, 2015 From Washington, this is VOA news. I’m Michael Lipin reporting from Washington. U.S. Mr. Earlier in the day, he ended a landmark visit to Kenya with a speech to thousands of students at a stadium outside the capital. VOA White House correspondent Aru Pande has more from Nairobi. I’m sorry we don’t have, seem to have that report, but we will try to get it for you next hour. We’re staying with Mr. On Tuesday, the U.S. president is expected to visit the African Union headquarters in Addis Ababa before flying back to Washington. Syrian President Bashar al-Assad has acknowledged that his military has given up some regions of the country as it battles insurgents. In a speech broadcast live on state television on Sunday, President Assad said “We must define the important regions that the armed forces hold onto so that they don’t allow the collapse of the rest of the Syrian areas.” Mr. You are listening to VOA news. There was no immediate claim of responsibility.

Short Stories ESL Podcast - LinkEngPark British Council Short Stories ESL Podcast: a collection of stories and poems written by famous writers like Shakespeare and Wordsworth as well as stories by our resident writer, Chris Rose. They are suitable for learners from Intermediate to Advanced level. Listen to them on your computer, or download them to your mp3 player or smartphone. Scarlett Scarlett is twelve years old and is trying to understand the world around her. A Serious Case My friend is afraid of spiders. The comeback Fausto Ruiz got off the boat at the port of the city where he had been born fifty years ago, and to which he had not returned for twenty years. The Skier Afel was twelve years old when he saw them. The Christmas the Lights Went Out Five people, whose lives interrelate, live the build-up to Christmas in different ways in different places. Mr Smith’s new nose It is the 22nd century and the world is very different. Beginner’s Luck The Interesting Most Boring Man in the World Nikos was an ordinary man. Three jokes

BBC Learning English | Talk about English - Insight plus How to use songs in the English language classroom What makes for a successful song-based lesson? Adam Simpson, second-time winner of the British Council’s Teaching English blog award for his post on conditionals (written with Paul Mains), explains. One of the big problems we all face, whether teaching English to children or adults, is maintaining learners’ interest throughout our lessons. Consequently, we often have to be very creative in the techniques we use. What makes music such a great teaching tool is its universal appeal, connecting all cultures and languages. This makes it one of the best and most motivating resources in the classroom, regardless of the age or background of the learner. Planning for the use of songs in class The process of selecting a song is one of the most difficult aspects of using music in a lesson. Carefully examine what it is you want your class to learn in the lesson Is this going to be a lesson focusing on vocabulary, grammar, pronunciation, or a particular topic? How old are your learners? 1. 2. 3. 4. 5.