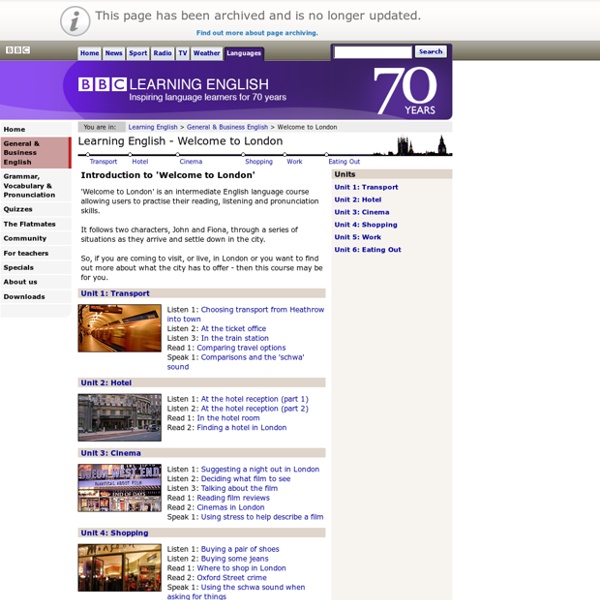 Podcasts in english ►Go to travelogues Follow the pie team on their travels and learn English along the way ►Go to pie plus Academic Wordlist In this section you can do practice tests for all groups of the academic word list. The Academic Word List (AWL) was developed by Averil Coxhead at the School of Linguistics and Applied Language Studies at Victoria University of Wellington, New Zealand. The list contains 570 word families which were selected because they appear with great frequency in a broad range of academic texts. The list does not include words that are in the most frequent 2000 words of English (the General Service List), thus making it specific to academic contexts. The AWL was primarily made so that it could be used by teachers as part of a programme preparing learners for tertiary level study or used by students working alone to learn the words most needed to study at colleges and universities. The 570 words are divided into 10 Groups.

Video projects In this integrated skills series by Jackie McAvoy, students produce TV and radio programmes. There are comprehensive teaching notes and student worksheets, plus tips for recording and downloading videos. Students record their programmes, either as audio or video, and then upload them to YouTube or Google video. We will show some of the best here on onestopenglish, so send links to your students' videos to webeditor@macmillan.com. TOEFL Practice, Section 3: Speaking The speaking section of the TOEFL takes approximately 20 minutes to complete. You will be asked 6 speaking questions. The first two are about familiar topics, and the other four are about short readings, lectures, and conversations. You will have a short amount of time after you read each question to prepare your response. Then you will be given a short amount of time to speak into a microphone.

Podcasts in english ►Go to travelogues Follow the pie team on their travels and learn English along the way ►Go to pie plus Free TOEFL Practice The Test of English as a Foreign Language (TOEFL) measures the ability of non-native speakers of English to use and understand North American English as it is spoken, written and heard in college and university settings. You have 20 minutes to do 20 questions. When you have completed the test you will get a score and you can review your answer to each question. Most people who take the TOEFL test are planning to study at colleges and universities where instruction is in English.

Asking For and Giving Street Directions English Exercise Introduction: Anybody who has travelled to another country or city has got lost. Sometimes maps don't help, so you have to ask somebody for directions. If you're in a country where they don't speak your language, this can be difficult. At other times, you will have to give directions to people visiting your country. In many cases, people just follow the direction the person was pointing to, and hope they will find the place they are looking for.

25 BEST WEBSITES FOR LEARNING ENGLISH I want the new e-book! How do you learn English in your free time? Do you meet internationals in cafés, do you self-study using books, do you get on the internet? When it comes to learning many people have realized they are not going to acquire the language just by sitting in classrooms. How To Read Effectively In A Foreign Language If you’re learning a foreign language, and you don’t read regularly… You should be. But do you know how to read effectively in another language, without getting overwhelmed by unknown vocabulary and complex grammar that doesn’t make sense? In this article you’ll learn how to use reading to quickly learn new words and boost your fluency in your target language, even if you’re just getting started, and even if you’ve tried and failed before. Let’s get started.

Drawing for Change: Analyzing and Making Political Cartoons Photo Political cartoons deliver a punch. They take jabs at powerful politicians, reveal official hypocrisies and incompetence and can even help to change the course of history. But political cartoons are not just the stuff of the past. Banksy's Dismaland 'gave Weston-super-Mare a £20m boost' Image copyright Getty Images When Banksy's anti-capitalist show Dismaland closes its doors on Sunday, the irony that it will have generated an estimated £20m in extra revenue for its surrounding area will not have been lost on traders. Over the past five weeks, more than 150,000 people have visited the subversive theme park in a derelict seafront lido, which had been shut since 2000 and reopened in a blaze of publicity on 20 August.