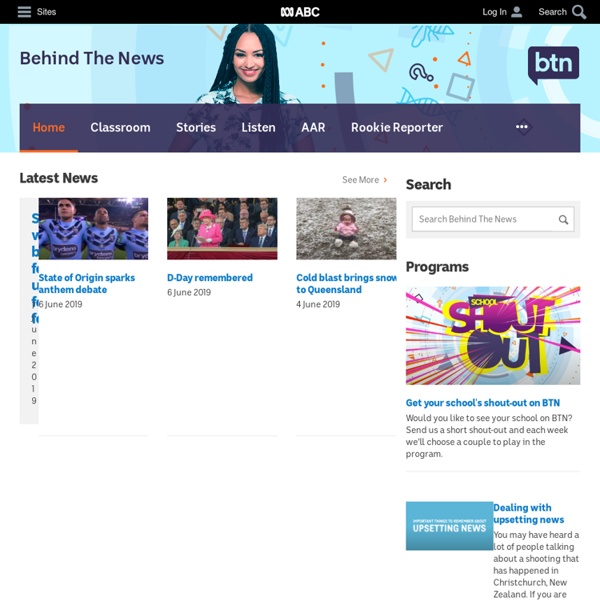 Weekdays: 02/06/2017 watch BTN Investigates Have you seen or heard something in the news you'd like explained?Add Question Welcome Book Gallery Over 12,000 kids have sent in their message to refugees.View Kind Classrooms We challenged schools across the country to show a little kindness to their local community.View the gallery River Kids Ngarrindjeri boy, Tyrone, introduces us to some of the people who live on the Murray.Watch Shelly the Turtle 11-year-old Ross releases rare Flatback turtle he helped rescue.Watch Saving The Earless Dragon A class in Canberra is using art to help save an endangered species.Watch Protecting Rivers Two rivers in India have just been given the same rights as people! Bringing back the planet Pluto A group of scientists is trying to get Pluto reinstated as a planet.Watch Afghan Refugee Story Kbora Ali is the first Afghan refugee to join the Australian Defence Force.Watch Unfairy Tales Animations designed to show the world what it's like to be a young refugee.Watch

Google Lit Trips for Young Readers Where in the world will our youngest readers travel as they discover the world of books! Reading About Reading Kind Words Movie Segments for Warm-ups and Follow-ups I really liked this movie. I was intrigued by the content of the bag. It was a surprise to me.

Be a better writer in 15 minutes: 4 TED-Ed lessons on grammar and word choice There’s no denying it — the English language can be mighty tricky. When writing a paper, a novel or even an e-mail, you might look at a sentence you just wrote and think, “Is that comma supposed to be there?” or “Is that really the best word to use?” Fear not! Five-Minute Film Festival: Virtual Field Trips The dog days of summer are upon us; now is the time when all the other activities have run out. Whether you're a parent looking to entertain bored, overheated children, or a teacher already brainstorming ways to break down the four walls of your classroom in the fall, how about taking a virtual field trip? As edtech writer Audrey Watters argues, real-life field trips offer enriching experiences that virtual ones can't, but resources are not always available for in-person trips. Besides -- virtual trips can take you places that wouldn't be logistically possible in the real world.

Editable PowerPoint Newspapers PowerPoint Template Views 925,852 Filed under Educational , Editor's pick, english, newspaper, resource, school We have just updated our popular editable PowerPoint newspapers. With these you can create your own news headlines, articles and insert your own pictures. Following a couple of requests, we have updated these so that you can now add in your own newspaper name. A few different types of newspapers are included in the template. The science of ‘Inside Out’: 5 TED-Ed Lessons to help you understand the film Inside Out, Pixar’s latest animated masterpiece, is not only an emotional rollercoaster, but also a vehicle for some solid scientific storytelling. Of course, the film can’t be taken literally, as it’s a visual interpretation of abstract concepts: memories are not spheres, and the train of thought is not … actually a train. To help clarify the trickier science, we’ve rounded up 5 TED-Ed Lessons that explain some of the neuroscience and psychology introduced in the film. Memories drive both the plot of Inside Out and most of the inner workings of Riley’s brain. But how do our brains actually store them for later retrieval?

Connect Fours - Quiz Template from ClassTools.net You will see a wall of 16 clues. You need to group them into 4 rows of 4 connected items. Simply click four cards to identify a group. You score 1 point for each group found within 2.5 minutes. Shakespeare - Hamlet Hamlet, the Prince of Denmark, has come back from university to find that his father, the old king, is dead. His mother has married his father’s brother, Claudius, who is now king of Denmark. Hamlet is shocked that his mother has married so soon after his father’s death, and angry that she has married Claudius. Soon, a ghost is seen walking on the castle walls. The ghost looks like Hamlet’s father, the dead king.

A Summary and Analysis of the ‘Rumpelstiltskin’ Fairy Tale A curious introduction to a classic fairy story How old do you think the story of Rumpelstiltskin is? It was famously included in the 1812 volume Children’s and Household Tales by the Brothers Grimm (a book that’s better known as Grimms’ Fairy Tales), but many of the tales written down by the German siblings were of a considerable vintage by then. The surprising thing is that the story of Rumpelstiltskin – albeit under a different name – is thought to be some 4,000 years old. To put that in perspective, that’s over a thousand years before Homer, and roughly contemporaneous with the earliest surviving versions of the tales that comprise the Epic of Gilgamesh, widely regarded as the oldest epic.