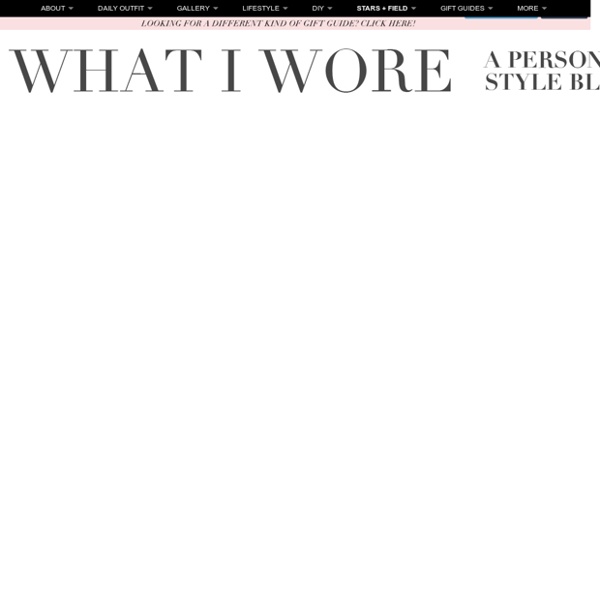 WhatIWore: Know someone who loves nothing more than camping out and sitting ‘round the fire? These gift ideas span from stocking stuffers to bigger splurges and could work for a guy or gal! Pocket Outdoor Survival Guide - a cute little stocking stuffer with loads of tips and tricks for spending time in the great outdoors. Firestarter - I’ve got a huge respect for those who can start a fire with minimal matches or any fuel! State or National Park Pass - Annual passes start anew January 1, which make Christmas the perfect time to give one as a gift! High Quality Sleeping Bag - This one falls into the splurge category, so best for an avid camper that could use an update. Waterproof Outdoor Blanket - I’m such a sucker for red and black plaid and this one looks extra snuggly. Dutch Oven - Every fall my family makes a huge batch of chilli in a similar pot over the fire. Enamelware Coffee Pot - Honestly, I just want this for my own campsite! Cute First Aid Kit - I like things that are ka-yoot.

Behind The Seams (In Crowd skirt c/o Pac Sun, Diane Von Furstenburg top, Bettye Muller boots, random python tights) Getting into the holiday spirit by wearing a splash of RED! I paired this flowy skirt (c/o PacSun) with a sheer, sweetheart top from Diane Von Furstenburg and python tights. Thanks for reading! xoxo Style99 2011 Influential Fashion Blog Ranking Style99 Methodologylog4j:WARN Please initialize the log4j system properly. Traffic is always an indicator of popularity, but related actions like linking to stories of interest, or sharing them on social networks are a greater indicator of influence. After building our initial index of websites, a score is assigned to each blog based on link data and sharing activity across social networks.

Steal her style Valentino Resort 2014. I found this collection interesting. Some of the skirts and dresses seemed school girlish in a childish, naive way in my eyes but still there’s something about these outfits that captivate me. The military feel is undeniable but seems to make the outfits come together for me. Whether it’s the colours used or the tone-in-tone of these outfits I can’t seem to put my finger on it but it does captivate me. The riding boots and lady-like purses in the first two pictures brings a sense of interesting elegance to a bunch of outfits that would, in my opinion, have resembled something a child could wear. International team maps nearly 200,000 global glaciers in quest for sea rise answers An international team led by glaciologists from the University of Colorado Boulder and Trent University in Ontario, Canada has completed the first mapping of virtually all of the world's glaciers -- including their locations and sizes -- allowing for calculations of their volumes and ongoing contributions to global sea rise as the world warms. The team mapped and catalogued some 198,000 glaciers around the world as part of the massive Randolph Glacier Inventory, or RGI, to better understand rising seas over the coming decades as anthropogenic greenhouse gases heat the planet. Led by CU-Boulder Professor Tad Pfeffer and Trent University Professor Graham Cogley, the team included 74 scientists from 18 countries, most working on an unpaid, volunteer basis. The project was undertaken in large part to provide the best information possible for the recently released Fifth Assessment of the Intergovernmental Panel on Climate Change, or IPCC.

25 Reasons Why You Should Dress Up Every Day - College Fashion Photo Credits: 1, 2, 3, 4 A few weeks ago, a reader left a comment that made me think about the things we wear every day and why we wear them. She was asking for advice on what to do when people ask “why are YOU so dressed up?” As if wearing something cute that makes you feel good is a “strange” thing to do! That comment got me thinking about dressing up and what that means. Since when did it become an unusual thing to put effort into what you wear and have fun with fashion? Wallpaper sorted by Date Sorted by Date There are 3886 free desktop wallpapers available below. You are on page 1 of 389. Your screen's resolution is 1600x1200 pixels. Quickly Download Every InterfaceLIFT Wallpaper!

A To-Do List for the CEO of Your Career - Cathy Benko by Cathy Benko | 11:12 AM December 13, 2010 Let’s start off with a pop quiz: Who is the CEO of your career? If you answered with any pronoun that is not in the first person, then guess again. I was reminded (once again) of this just last week. I spent a day on the Harvard Business School campus, my old stomping grounds, for a bunch of meetings with professors, students, my book editor, some Deloitte folks, etc. World Cup 2014: Group C Preview Group C may not boast the most illustrious names at the 2014 FIFA World Cup but there lies the beauty of this somewhat unpredictable assemble. Colombia, Ivory Coast, Japan and Greece complete one of the most evenly matched quartets in Brazil and none of these sides have ever made it past the last-16 stage in a World Cup finals. This lack of World Cup pedigree combined with the absence of a clear favourite or ‘whipping boy’ only adds to the intrigue. Colombia Having endured a period of underachievement, the Colombians are making their much-anticipated return to the World Cup following a 16-year hiatus. The Cafeteros were impressive during World Cup qualification, narrowly finishing second to Argentina.

The New Path To the C-Suite The Idea in Brief The skills needed for top jobs change with the times. The résumés of today’s C-level managers look much different from those of their predecessors from 10 or 20 years ago. For the senior-most executives, functional and technical expertise has become less important than understanding business fundamentals and strategy. Top-team members now tend to have more in common with their executive peers than with the people in the functions they lead. Chief human resource officers, for instance, increasingly come from outside HR; IT executives now often benefit from a marketing background.

Pirlo: This World Cup will be my last competition with Italy Juventus midfielder Andrea Pirlo has revealed that he will be leaving the Italian national team after this summer’s World Cup in Brazil. The 35-year-old, who just renewed his contract with the Bianconeri until June 2016, has played a major part in the Azzurri senior team for over a decade, even helping his country win the 2006 World Cup in Germany, but he admits that the time has come for him to give other players a chance to prove themselves. Pirlo spoke during a press conference at Casa Azzurri on Wednesday about Italy’s main competition and their chances of succeeding in Brazil, while also commenting on his role in the Azzurri line up and the talent possessed by national team team-mate Marco Verratti.

Almost Ready: How Leaders Move Up Shortly after being elected U.S. president in 1960, John Kennedy offered Robert McNamara, then president of Ford, the post of treasury secretary. McNamara turned down the offer, saying he wasn’t qualified for the job. Then, Kennedy offered him the job of secretary of defense. When McNamara demurred again for the same reason, a frustrated Kennedy exclaimed: “Bob, there is no school to learn to be president, either!” Leadership at the top is never easy for even the most experienced people. For someone taking on the job of CEO for the first time, mastering the new skills and sorting out the uncertainties that go with the position can be an overwhelming challenge.

Balotelli and Cassano must ‘seize their opportunity’ states former AC Milan midfielder Former AC Milan stalwart Gennaro Gattuso spoke about the upcoming World Cup and has also offered some words of advice to mercurial Italian forwards Mario Balotelli and Antonio Cassano. Balotelli and Cassano both have histories of being difficult characters and causing problems off the pitch despite their immense footballing talent, but Gattuso believes this summer’s tournament is an opportunity for the duo to redeem themselves. “The World Cup is a unique, rare opportunity,” Gattuso told TuttoMercatoWeb. “When it ends, or when you are knocked out, you never want to think that you have not committed 100%. “Apart from maybe [Gianluigi] Buffon and [Lothar] Matthaus, you can only play a few World Cups and one must seize the opportunity [to play well]. “This applies to Balotelli, Cassano and others.