Hopman Cup 2016 - LIVE - France vs Germany Online On SonyLiv. Pro Wrestling League 2015-Bengaluru Yodhas vs. Punjab Royals-Full Match Online. Pro Wrestling League Live Matches Exclusively On SonyLiv. World Cup Semi-final 2: India Vs Australia in Sydney. Mar 25, 2015 Sydney, March 25: In top form after blowing away rival teams one after another, India will face their toughest test when the defending champions take on a formidable Australia in what promises to be an explosive semi-final of the World Cup here tomorrow. 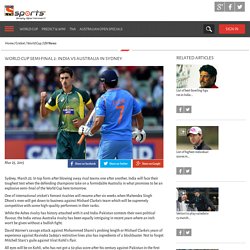 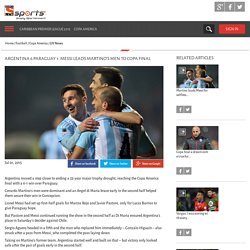 Gerardo Martino's men were dominant and an Angel di Maria brace early in the second half helped them secure their win in Concepcion. Bowlers doing a good job, says Indian skipper Dhoni. Mar 10, 2015 Hamilton, Mar 10: Skipper Mahendra Singh Dhoni today heaped praise on his bowlers for bundling out every team that India have played so far in the ongoing cricket World Cup, saying they have stepped up to the challenge nicely and are doing a 'really good job'. 'One of the coaches was telling me (about India taking 50 wickets in five matches). 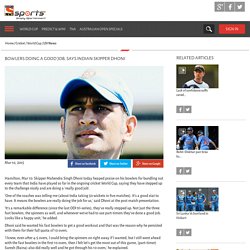 It's a good stat to have. It means the bowlers are really doing the job for us,' said Dhoni at the post match presentation. 'It's a remarkable difference (since the last ODI tri-series), they've really stepped up. Dhoni said he wanted his fast bowlers to get a good workout and that was the reason why he persisted with them for their full quota of 10 overs. Asked what instructions he yells out to his bowlers from behind the stumps, Dhoni said: 'At times I just try to tell them what my gut feeling is. 13 Quotes Which Prove That MS Dhoni Is India's Greatest ODI Captain. Mar 12, 2015 1. 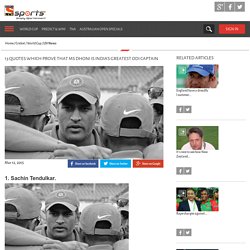 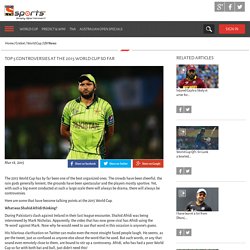 The crowds have been cheerful, the rain gods generally lenient, the grounds have been spectacular and the players mostly sportive. Yet, with such a big event conducted at such a large scale there will always be drama; there will always be controversies. Every Sports News: NBA - Celtics Rally Past Magic, 95-88. The Orlando Magic traveled to Boston to take on the Celtics for the second time in five days. 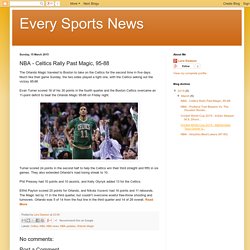 Much like their game Sunday, the two sides played a tight one, with the Celtics eeking out the victory 95-88. Top 10 memories from the 2015 World Cup. Mar 31, 2015 The World Cup has given us plenty of memories and has lived up to all its hype, carrying on from where 2011 left off. 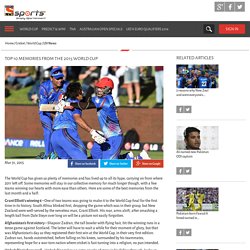 Some memories will stay in our collective memory for much longer though, with a few teams winning our hearts with more ease than others. Here are some of the best memories from the last month and a half: Ilyasova scores 34 points, Bucks beat Pacers 111-107. Mar 27, 2015 Struggling with early season injuries and the adjustment to a new coaching staff, Ersan Ilyasova hasn't quite been himself for the Milwaukee Bucks. 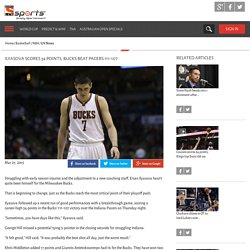 That is beginning to change, just as the Bucks reach the most critical point of their playoff push. Australia Beats NZ to Win Its 5th Cricket World Cup Title. Mar 29, 2015 Michael Clarke signed off with a half century and another World Cup title, leading Australia to a seven-wicket victory over first-time finalist New Zealand before a record crowd at the Melbourne Cricket Ground on Sunday. 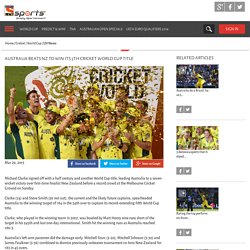 Clarke (74) and Steve Smith (56 not out), the current and the likely future captains, spearheaded Australia to the winning target of 184 in the 34th over to capture its record-extending fifth World Cup title. Clarke, who played in the winning team in 2007, was bowled by Matt Henry nine runs short of the target in his 245th and last one-day international. Curry and Thompson help Warriors beat Clippers 110-106. Apr 01, 2015 Stephen Curry scored 27 points, Klay Thompson added 25 and the Golden State Warriors held off the Los Angeles Clippers 110-106 Tuesday night for their 10th consecutive victory. 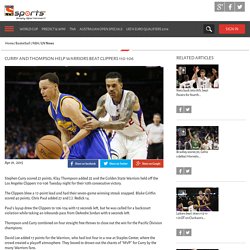 The Clippers blew a 17-point lead and had their seven-game winning streak snapped. Blake Griffin scored 40 points, Chris Paul added 27 and J.J. Redick 14. If Sunil Narine is Not Cleared, KKR Might Pull Out Of The IPL. IPL season 8 is about to start and Kolkata Knight Riders officials have made it known that ICC cleared Sunil Narine and BCCI is yet targeting the spinner. KKR officials also said that Sunil shouldn't be asked to undergo another test for his bowing action. During the 2014 Champions League Twenty20, the Caribbean bowler was banned for his actions and he could not play in the final against the fellow IPL side CSK, resulting in KKR losing by 8 wickets.

Since then Narine has gone back to the nets and reworked his action, which led him to being cleared by ICC after bio-mechanical test. But BCCI refused to accept the reports of the ICC and has insisted that Sunil Narine undergoes another round of testing at the Sri Ramachandra University, Chennai. This action of the BCCI has lead to the KKR officials thinking about taking legal action against BCCI board. Euro 2016 Qualifier - Belgium Defeats Israel 1-0. Clippers Defeat Lakers in 106-78 Rout. Clippers blew out the Lakers on Sunday leading from start to finish in defeating Lakers for sixth consecutive time.

With the loss, the Lakers have lost six straight to the Clippers. Both teams play again on Tuesday, but the Clippers will act as the home team in the next meeting. On Sunday, the Lakers and Clippers both started slow. After one quarter, Blake Griffin had 10 points, and the Clippers held a 23-16 lead due largely to the purple and gold failing to get production from their starting back court. In the second quarter, the Lakers would struggle to score, and Chris Paul would continue to set the table for the Clippers' offense. IPL 2015 Season 8 Extra Innings. Kolkata Knight Riders beat Mumbai Indians by 7 wickets in the opening game of the IPL at Eden Gardens.

A half century from captain Gambhir and 46 not out from Suryakumar Yadav saw KKR stroll past Mumbai Indians. After an initial collapse, Rohit Sharma and Corey Anderson rode their luck to lift Mumbai Indians to 168/3. KKR lost Robin Uthappa early. However, it was the young Suryakumar Yadav who finished off the game for the Kolkata franchise with a breath-taking 46 not out of just 20 deliveries. Orlando Magic wins 105-103 over Chicago Bulls. Apr 09, 2015 The Orlando Magic spoiled Derrick Rose's return from his latest knee injury.

Victor Oladipo had 23 points and scored on a layup with 1.5 seconds left to give the Magic a 105-103 victory over the Chicago Bulls on Wednesday night. Rose started and played for the first time in more than a month since undergoing surgery on his right knee. But working on a minutes restriction, the point guard was 3 of 9 from the field and finished with nine points in 19 minutes. Klay Thompson Scores 42, Leads Warriors To Beat Memphis Grizzlies, 111-107. Harden has triple-double, Rockets beat Jazz 117-91. Apr 16, 2015 James Harden and the Houston Rockets won't take long to celebrate winning their first division title since 1994 and clinching the No. 2 seed in the Western Conference. They'll soon be looking ahead after losing in the first round of the playoffs the last two seasons.

"It's a great accomplishment for us," Harden said. "We're very proud of that. Barcelona Defends 3-1 Lead at Home in CL 2nd Leg Against PSG. Apr 21, 2015. Cavaliers Beat Celtics 99-91 in Game 2, Lebron Scores 30. Apr 22, 2015 The Celtics wouldn't go away, and then LeBron James showed them the door. Cleveland Cavaliers Move On Without Love, Out With Dislocated Shoulder. Apr 28, 2015. San Antonio Spurs Beat the Los Angeles Clippers 111-107. Apr 23, 2015 Three days from his 39th birthday, Tim Duncan keeps getting better with age. Starc and Gayle Shine for RCB against DD. Apr 27, 2015 It was a sweet homecoming for Delhi boy Virat Kohli as he led Royal Challengers Bangalore (RCB) to a crushing 10 wicket win over Delhi Daredevils in the IPL contest in New Delhi on Sunday. Sunrisers Hyderabad (SRH) defeated Kings XI Punjab (KXIP) by 20 Runs.

May 18, 2015. Grizzlies and Hawks win to square both series at 1-1. May 06, 2015 OAKLAND, California (AP) Memphis' Mike Conley returned just eight days after having facial surgery to lead the Grizzlies to a rare 97-90 win at Golden State on Tuesday to square their NBA Western Conference semifinal series 1-1. Hull Relegated After 0-0 Draw with Manchester United.