Riggs: Power of sportsmanship shines brightest. Footballer guilty of homophobic gesture during. Notts County race storm: Club investigating allegations of racism against two coaches(B1) It was claimed a banana was thrown at one young black player, while racist comments were also alleged to have been made Two Notts County coaches have quit the club after allegations of racist behaviour. 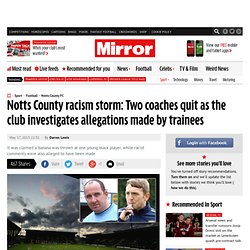 The claims were made by two trainees at the League One side, who made official complaints. They were backed up by several other trainees, both black and white. One of the allegations was that one coach, Brett Adams, had thrown a banana - with “f*** off” written on it - to a black youth player and then said: “F*** off and eat it.” It was also claimed that Lead Foundation coach Lee Broster walked into a changing room while the players were listening to rap music and said: “No wonder you black lads always go around stabbing people when you listen to music like that.” Broster is also alleged to have walked into a room, switched off a light and said: “Make sure you black lads smile so I can see you.” The club launched a full investigation after the protests were made to them last month. Sol Campbell: 'I will never get a footbal coach job"(B1) Sol Campbell believes he should move abroad to coach as he said there are no oppportunities for black coaches in the UK [ACTION IMAGES] The Arsenal legend claims there are no jobs here due to a racist attitude towards black coaches. 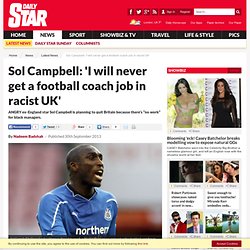 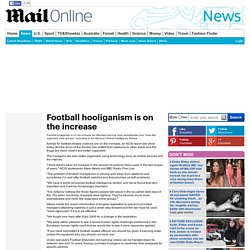 Arrests for football-related violence are on the increase, an NCIS report will show today. But the focus of the trouble has shifted from stadiums to other areas and the thugs are more violent and better organised. The hooligans are also better organised, using technology such as mobile phones and the internet. "I think there's been an increase in the amount of violence been used in the last couple of years," NCIS spokesman Mark Steels told BBC Radio Five Live. "The problem of football hooliganism is moving well away from stadiums and sometimes it is well after football matches and that provides us with problems. "We have a world-renowned football intelligence section and we've found that very important and it will be increasingly important.

"We fought very hard after Euro 2000 for a change in the legislation. Committee working to repeal anti-discrimination. The hooligan problem(B2) They hunt in packs, fuelled by cocaine, hooked on violence and occasionally wielding chains. 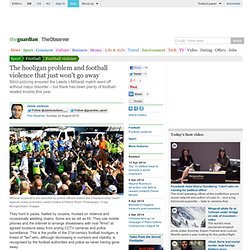 Some are as old as 65. They use mobile phones and the internet to arrange showdowns with rival "firms" at agreed locations away from prying CCTV cameras and police surveillance. This is the profile of the 21st-century football hooligan, a breed of "fan" who, although decreasing in numbers and visibility, is recognised by the football authorities and police as never having gone away.

Less than a fortnight ago, Danny Scriven, a 26-year-old postman, and 21-year-old Kali Hagenstede – two members of the Tottenham firm the Yid Army – were jailed for 15 months and given six-year banning orders (keeping them away from football matches) for being part of a 20-strong mob that smashed up The George, a pub in Holloway used by Arsenal's firm the Herd, after Spurs lost the north London derby last October. Away from the ground it is a different story. Yesterday, Blackpool were at the Emirates. 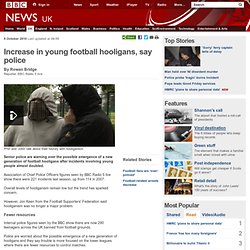 Association of Chief Police Officers figures seen by BBC Radio 5 live show there were 221 incidents last season, up from 114 in 2007. Overall levels of hooliganism remain low but the trend has sparked concern. However, Jon Keen from the Football Supporters' Federation said hooliganism was no longer a major problem. Fewer resources.