Rising Costs of Sports. Get off that Couch and Play. Benefits of School-Based Sports - Global Sports Development. High fives. 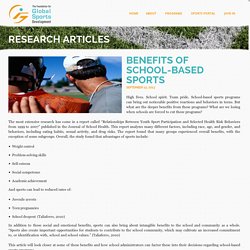 School spirit. Team pride. School-based sports programs can bring out noticeable positive reactions and behaviors in teens. But what are the deeper benefits from these programs? What are we losing when schools are forced to cut these programs? The most extensive research has come in a report called “Relationships Between Youth Sport Participation and Selected Health Risk Behaviors from 1999 to 2007” published in the Journal of School Health. Weight controlProblem-solving skillsSelf-esteemSocial competenceAcademic achievement And sports can lead to reduced rates of: Juvenile arrestsTeen pregnanciesSchool dropout (Taliaferro, 2010) In addition to these social and emotional benefits, sports can also bring about intangible benefits to the school and community as a whole. This article will look closer at some of these benefits and how school administrators can factor these into their decisions regarding school-based sports programs.

Health Benefits Social Benefits Emotional Benefits. Psychological and Social Benefits of Playing True Sport. A growing body of research literature finds that in addition to improved physical health, sport plays a primarily positive role in youth development, including improved academic achievement, higher self-esteem, fewer behavioral problems, and better psychosocial.29,30 Many studies focus on the effects of sport on the five “C’s”—competence, confidence, connections, character, and caring—which are considered critical components of positive youth development.31,32 It has long been thought that the many facets of playing sport—the discipline of training, learning teamwork, following the leadership of coaches and captains, learning to lose—provide lifelong skills for athletes. 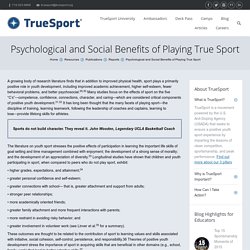 Sports do not build character. They reveal it. John Wooden, Legendary UCLA Basketball Coach • higher grades, expectations, and attainment;34 • greater personal confidence and self-esteem; • greater connections with school— that is, greater attachment and support from adults; • stronger peer relationships; Listening to a Son’s Concern About a Concussion. “Dad, I’m scared. 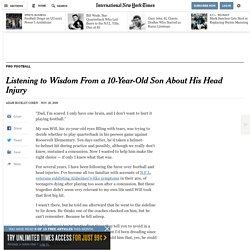 I only have one brain, and I don’t want to hurt it playing football.” My son Will, his 10-year-old eyes filling with tears, was trying to decide whether to play quarterback in his peewee game against Roosevelt Elementary. Ten days earlier, he’d taken a helmet-to-helmet hit during practice and possibly, although we really don’t know, sustained a concussion. Now I wanted to help him make the right choice — if only I knew what that was. For several years, I have been following the furor over football and head injuries. I wasn’t there, but he told me afterward that he went to the sideline to lie down. He fell asleep? Was this a concussion? Will spoke clearly, and his memory seemed intact. I don’t know why, at this crucial moment, I didn’t remember all I’d read. At first, he said only that his stomach hurt. Photo As he explained his fears, I thought about why I wanted him to play that afternoon. But when Will voiced his fears, I woke up.

High School, College Football Comes With Risk. THURSDAY, July 26 (HealthDay News) -- With the school football season just around the corner, a new study is raising awareness of the risks associated with playing the game. 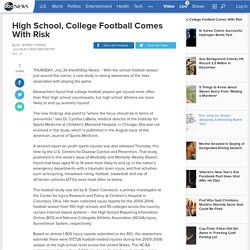 Researchers found that college football players get injured more often than their high school counterparts, but high school athletes are more likely to end up severely injured. The new findings also point to "where the focus should be in terms of prevention," said Dr. Cynthia LaBella, medical director of the Institute for Sports Medicine at Children's Memorial Hospital, in Chicago. She was not involved in the study, which is published in the August issue of the American Journal of Sports Medicine.

A second report on youth sports injuries was also released Thursday, this time by the U.S. The football study was led by R. But the researcher said she was surprised to find that the distribution of injuries differed, with fractures, concussions, and season-ending injuries more common among high school athletes. SOURCES: R.