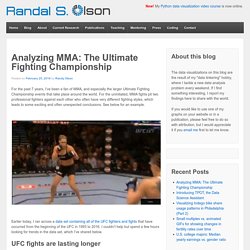 For the uninitiated, MMA fights pit two professional fighters against each other who often have very different fighting styles, which leads to some exciting and often unexpected conclusions. See below for an example. Earlier today, I ran across a data set containing all of the UFC fighters and fights that have occurred from the beginning of the UFC in 1993 to 2016. I couldn’t help but spend a few hours looking for trends in the data set, which I’ve shared below. UFC fights are lasting longer UFC fights are lasting significantly longer than they used to. In fact, one of the shortest fights in UFC history took place in 1996, when Don “The Predator” Frye knocked out Thomas Ramirez in 8 seconds, prematurely ending the super heavyweight’s career that night. In many ways, the increased fight lengths were due to stricter regulations forced on the UFC.

How To Do Push Ups. Hockey Treadmill. Roberto Carlos' Goal against France. Football physics: The "impossible" free kick - Erez Garty. Chopping Wood a Manlier Feel than Sports. Being a lumberjack has long been considered among the “manliest” of professions, but now there may be scientific proof to back it up. 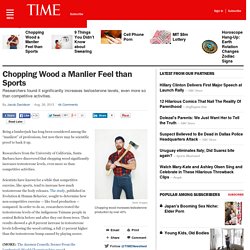 Researchers from the University of California, Santa Barbara have discovered that chopping wood significantly increases testosterone levels, even more so than competitive activities. The paper’s lead author Ben Trumble explained why testosterone is created during tree cutting. “If you’re better able to pull blood sugar into your muscle tissue, and better able to use that energy, you’ll be able to chop more trees,” Trumble in a statement. This is especially important for the Tsimane, who can’t just go to the supermarket and buy food. This might explain why his team also found that, while the Tsimane tend to have lower testosterone levels than those in first world countries, they retain the ability to to produce testosterone spikes longer than their developed-nation counterparts. 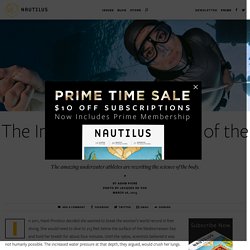 She would need to dive to 213 feet below the surface of the Mediterranean Sea and hold her breath for about four minutes. Until the 1960s, scientists believed it was not humanly possible. The increased water pressure at that depth, they argued, would crush her lungs. The then-33-year-old, South African, former acting student knew the feat would require rigorous training and commitment. But Prinsloo felt at home in the water. After six weeks, it was off to Dahab, Egypt, an isolated Bedouin Village hemmed in on one side by the Red Sea, and the Sinai Mountains on the others. As Prinsloo floated on her back above the hole and prepared to dive, the mood was every bit as solemn as at that Ashram back in India.

At a depth of 200 feet, she opened her eyes in the translucent water. About 60 feet down, Prinsloo reached “negative buoyancy.” Chest 101: An Anatomical Guide to Training : Fitness. Ping Pong Master. Messi - gran jugada frente al SD Eibar. Most popular sports team in the world according to social media. Incredible Women's Volleyball Rally In China.