Premier League: Where are your club's followers? U.S. Anti-Doping Agency (USADA) Sport is supposed to be competitive. 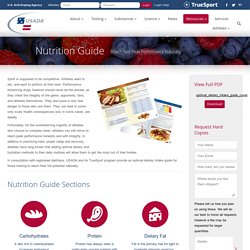 Athletes want to win, and want to perform at their best. Performance enhancing drugs however should never be the answer, as they cheat the integrity of the game, opponents, fans, and athletes themselves. They also pose a very real danger to those who use them. They can lead to some very scary health consequences and, in some cases, are deadly. Fortunately, for the overwhelming majority of athletes who choose to compete clean, athletes can still strive to reach peak performance honestly and with integrity.

In consultation with registered dietitians, USADA and its TrueSport program provide an optimal dietary intake guide for those looking to reach their full potential naturally. The internet of things is revolutionising the world of sport. Each game in this year’s Six Nations championship will produce two million rows of data, equivalent to more than 1,400 actions (tries, conversions, tackles, passes and so on) per game. 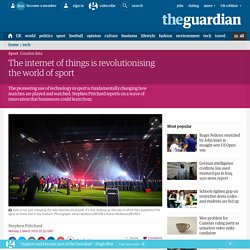 This data will be fed to broadcasters, fans (via the official Six Nations app among other channels) and to coaches who can and will use the information to improve player performance. The idea of capturing data during a sporting event is not new but the richness of the data now available and the speed at which it is gathered certainly is. In the 1950s Charles Reep, an RAF officer and accountant, pioneered the idea of data capture in sport. While watching football matches he created a system of paper notation to record players’ moves.

It took him three months to wade through the data produced by the 1958 World Cup final. Reep’s work is not without controversy: among other things, he is credited with driving English football managers’ fondness for the long-ball game. The physics of swimming. The physics of running. The physics of cycling. Stephen Fry Explains the Rules of Cricket in 10 Animated Videos. The Tour De France Explained in Animation. Technologies. eLearning Tools-Resources-etc. Time-to-Run. Teaching Themes - The Olympics. Below, you will find a wide range of ideas and resources to help you when you are teaching children about the OIympics and other sporting events. 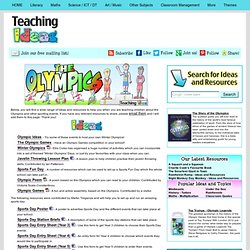 If you have any relevant resources to share, please email them and I will add them to this page. Thank you! Olympic Ideas - Try some of these events to host your own Winter Olympics! The Olympic Games - Have an Olympic Games competition in your school! Winter Olympics - Ellis Coles has organised a huge number of activities which you can incorporate into a set of themed 'Winter Olympics' Days, or just try your favourites with your class when you can. The following resources were contributed by Martin Treganza and will help you to set up and run an amazing sports day: Sports Day Poster - A poster to advertise Sports Day and the different events that can take place at your school. Sworkit.

Technologies. Science of Baseball: Fastball Reaction Time Test. Click on the "play ball" button, then move your cursor over the part of the screen that shows the baseball field. 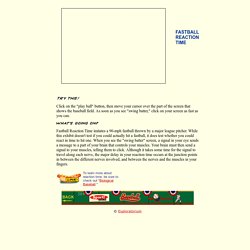 As soon as you see "swing batter," click on your screen as fast as you can. Fastball Reaction Time imitates a 90-mph fastball thrown by a major league pitcher. While this exhibit doesn't test if you could actually hit a fastball, it does test whether you could react in time to hit one. When you see the "swing batter" screen, a signal in your eye sends a message to a part of your brain that controls your muscles.

Your brain must then send a signal to your muscles, telling them to click. . © Exploratorium. Running Route Maps. Office Workouts. Workout gear don’t have to cost a fortune and a bit of imagination will get you far. 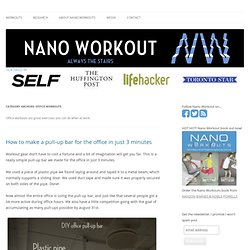 This is a really simple pull-up bar we made for the office in just 3 minutes. We used a piece of plastic pipe we found laying around and taped it to a metal beam, which normally supports a sliding door. We used duct tape and made sure it was properly secured on both sides of the pipe. Done! Now almost the entire office is using the pull-up bar, and just like that several people got a lot more active during office hours. How to make a pull-up bar for the office in 3 just minutes. Obama and Hamid Karzai on a walking chat outside the white house on Jan.11 2013 Walking meetings – walk 30miles a week while still at the office. People spend an average of 9.3 hours every day on their butt. In this thee minute TED talk Nilofer Merchant explains about the benefits of doing walking meetings. The idea is simple; If you have a one-on-one meeting your should make it into a walking meeting. Football 24-7, Football Latest, News, Views.

Energy in sports. Bikehub. Ballet in Super Slow Motion (And More Culture Around the Web)