Mexican Tarahumara woman wins 50km race wearing only sandals. MuscleWiki. MMA DOUBLE KNOCKOUT Axel Cazares vs Alan Vasquez. Explanation of the /r/bodyweightfitness Recommended Routine by Antranik. Rugby - Dempsey's accidental brilliance. 85-Year-Old Marathoner Is So Fast That Even Scientists Marvel. “When you get to my age, the rate of deterioration is accelerating,” Whitlock said. 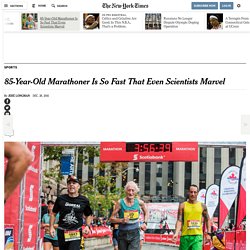 “I’m sure every year, every six months, make a difference. I don’t seem to be able to consistently train. Whether that’s a permanent situation, I’m hoping not.” The next looming marathon record is for age 90 and beyond. Fauja Singh of England ran 5:40:04 at the purported age of 92 in 2003, but his mark has not been ratified because he has been unable to produce a birth certificate. “We’ll see if I’m running when I’m 90,” Whitlock said. As a schoolboy in London in the 1940s, Whitlock said, he ran a mile in 4:34. Whitlock’s running career ebbed late in college when he sustained an injury to the Achilles’ tendon in his right foot.

“No one was running there at the time,” he said. He kept in reasonable shape by refereeing soccer matches, cycling and walking. Photo “He knows when to rest,” said Ken Young, a co-founder of the Association of Road Racing Statisticians. Correction: December 29, 2016. Magnificent team work, you don't have to be a football fan to appreciate this! - GIF on Imgur. Bruce Lee and his Wing Chun master Ip Man. Unstoppable. One Race, Every Medalist Ever - Interactive Graphic. Sources: "The Complete Book of the Olympics" by David Wallechinsky and Jaime Loucky, International Olympic Committee; Amateur Athletic Assocation; Photographs: Chang W. 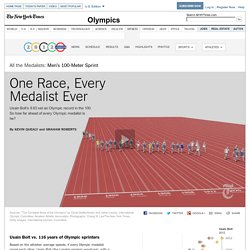 Lee/The New York Times, Getty Images, International Olympic Committee By KEVIN QUEALY and GRAHAM ROBERTS Usain Bolt vs. 116 years of Olympic sprinters Based on the athletes’ average speeds, if every Olympic medalist raced each other, Usain Bolt (the London version) would win, with a wide distribution of Olympians behind him. Below, where each sprinter would be when Bolt finishes his race. Usain Bolt2012 Meters behind 2012 Bolt Medals by country This chart includes medals for the United States and Australia in the "Intermediary" Games of 1906, which the I.O.C. does not formally recognize. Notable winners of the 100-meter sprint Archie Hahn United States The “Milwaukee Meteor” also won the 50-meter dash and the 200-meter dash in 1904. Jesse Owens Jim Hines Carl Lewis. BMX 1080 frontflip. Exercise and immunity: MedlinePlus Medical Encyclopedia. How Exercise Affects Immunity. Jim Brown March 11, 2013 Exercise as it relates to immunity is a mixed message.

Regular, moderate-intensity physical activity has been shown to help protect people against some diseases, particularly those that involve the upper respiratory track (like colds). However, too much exercise can have the opposite effect and reduce immunity. The keys are (1) knowing how much exercise is enough, (2) when exercise is appropriate and when it's not, and (3) which types of exercise are appropriate for your particular situation. Here are the details. iStockphoto / Thinkstock 2-3 The number of upper respiratory infections the average adult gets per year. 2 The number of weeks a person should wait before engaging in intensive physical training after serious “below the neck” symptoms (coughing, vomiting, diarrhea) caused by a respiratory infection. 25 – 50 The percentage of decrease in sick time for active people who complete at least 45 minutes of moderately-intensive exercise most days of the week Dr. Phys Ed: Does Exercise Boost Immunity? The first Olympic gymnast to score a perfect 10.

Icelandic commentator loses his mind. Origami Footwear: Lightweight Lace-Free Shoes Wrap & Fit Any Feet. A Japanese designer and Italian shoemaker have taken a fresh approach to athletic footwear, adapting the minimalist art of cloth wrapping to form the basis of a flexible shoe that fits any foot shape. 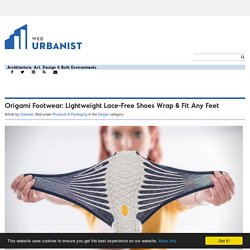 Masaya Hashimoto worked with Vibram, the makers of foot-shaped FiveFingers shoes (with articulated toes), to create the Furoshiki series of shoes with wrapping soles that fold around feet without needing laces (a simple hook and and loop system). A specially-engineered gripping system keeps the shoes in place and make it possible for the shoe to perform like ordinary footwear but with less weight and material.

The system has a number of advantages, including more flexible sizing than traditional shoes, easier packing for travel and the ability to skip socks comfortably. From Vibram: “The concept for this type of footwear was derived from the Japanese custom of packaging items by wrapping them in cloth fabric. Furoshiki is the only sole on the market that wraps around the entire foot. Create, Discover and Share on Gfycat. GoPro: Backflip Over 72ft Canyon - Kelly McGarry Red Bull Rampage 2013.