Page. 17 Hot Canadian Athletes Who Will Literally Melt The Winter Olympics. Gay Games. The Gay Games is the world's largest sporting and cultural event organized by, and specifically for lesbian, gay, bisexual, and transgender (LGBT) athletes, artists and musicians.[1] The 1994 Gay Games, held in New York City to coincide with the 25th anniversary of the Stonewall Riots, the modern start of the LGBT movement, "overtook the Olympics in size" with 10,864 athletes compared to 9,356 at the 1992 Barcelona Olympics and 10,318 at the 1996 Atlanta Olympics.[1] Founded as the Gay Olympics, it was started in the United States in San Francisco, California, in 1982, as the brainchild of Tom Waddell, whose goals were to promote the spirit of inclusion and participation, as well as to promote the pursuit of personal growth in a sporting event. 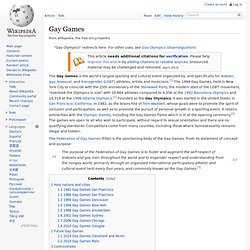 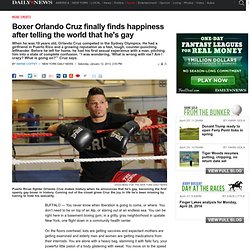 Coming out of the closet gives Cruz the joy in life he’s been missing by having to hide his sexuality. BUFFALO — You never know when liberation is going to come, or where. You don’t need to be on top of an Alp, or staring out at an endless sea. You can be right here in a basement boxing gym, in a gritty, gray neighborhood in upstate New York, one flight down in a community health center. On the floors overhead, kids are getting vaccines and expectant mothers are getting examined and elderly men and women are getting medications from their internists. You take a break and sit in a folding chair just outside the ring. “This is a beautiful moment in my life,” you say. You pause and your eyes well up, your relief palpable. “Now I am free,” you say. Your name is Orlando Cruz. Now? Q&A: Swedish gay footballer Anton Hysen.

Anton Hysen, the world’s only openly gay professional footballer, says his life has changed dramatically for the better, following his decision to come out eighteen months ago. 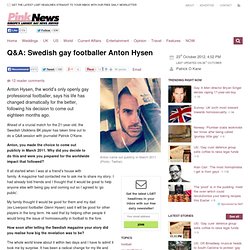 Ahead of a crucial match for the 21-year-old, the Swedish Utsiktens BK player has taken time out to do a Q&A session with journalist Patrick O’Kane. Anton, you made the choice to come out publicly in March 2011. Why did you decide to do this and were you prepared for the worldwide impact that followed? It all started when I was at a friend’s house with family. A magazine had contacted me to ask me to share my story. My family thought it would be good for them and my dad (ex-Liverpool footballer Glenn Hysen) said it will be good for other players in the long term.

How soon after telling the Swedish magazine your story did you realise how big the revelation was to be? The whole world knew about it within two days and I have to admit it took me by surprise. College Football Player Kicked Off Team After He Outs Himself During a Game. “I think it’s a transformational moment and seismic shift to see so many folks in the world of sports stepping up and speaking out in support of equality and fairness,” gay marriage advocate Brian Ellner told the New York Times this weekend. 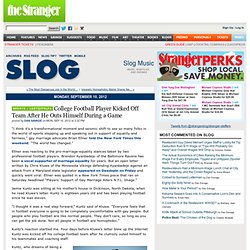 “The world has changed.” Ellner was reacting to the pro-marriage-equality stances taken by two professional football players. Brendon Ayanbadejo of the Baltimore Ravens has been a vocal supporter of marriage equality for years. But an open letter written by Chris Kluwe of the Minnesota Vikings defending Ayanbadejo against an attack from a Maryland state legislator appeared on Deadspin on Friday and quickly went viral.

Ellner was quoted in a New York Times piece that ran on Saturday headlined “Players’ Support of Gay Marriage Alters N.F.L. Here's Chris Kluwe Explaining Why He Wrote Today's Response To An Anti-Gay Marriage Politician. Two reasons I think - one is, the politician in question was pressuring the NFL owner to curtail his employee's right to free speech, which is what Kluwe is objecting to. 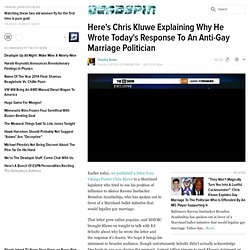 Second, it is a very well-written letter. And obviously we can applaud them both - Kluwe for his defense of the First Amendment and Ayanbadejo for exercising it. As a person who has also suffered for speaking out, *I*WILL*TELL*YOU* why Kluwe is getting more attention. I care who the openly gay Olympic athletes are. Jeff Sheng's 'Fearless' Project Features Intimate Portraits Of High School And Collegiate LGBT Athletes. In 2003, the year after Jeff Sheng graduated from college, he began working on a project photographing and interviewing high school and collegiate athletes across the United States who openly self-identified as lesbian, gay, bisexual, or transgender (LGBT), but continued to play sports on their predominantly “straight” school sports teams. 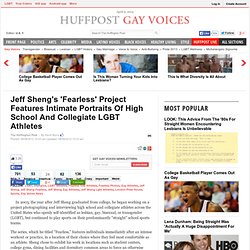 The series, which he titled "Fearless," features individuals immediately after an intense workout or practice, in a location of their choice where they feel most comfortable as an athlete. Sheng chose to exhibit his work in locations such as student centers, college gyms, dining facilities and dormitory common areas to force an otherwise non-art-going public to see the images and consider the issues being presented. Jeff Sheng's 'Fearless' Project Features Intimate Portraits Of High School And Collegiate LGBT Athletes.

In 2003, the year after Jeff Sheng graduated from college, he began working on a project photographing and interviewing high school and collegiate athletes across the United States who openly self-identified as lesbian, gay, bisexual, or transgender (LGBT), but continued to play sports on their predominantly “straight” school sports teams. 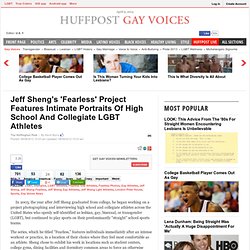