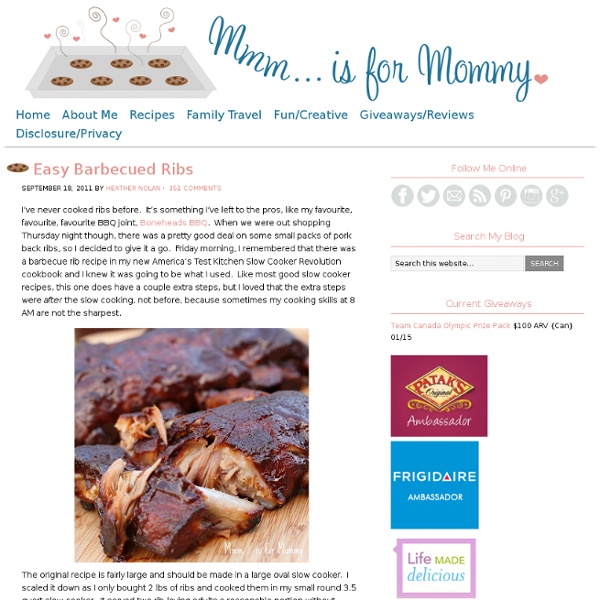 I’ve never cooked ribs before. It’s something I’ve left to the pros, like my favourite, favourite, favourite BBQ joint, Boneheads BBQ. When we were out shopping Thursday night though, there was a pretty good deal on some small packs of pork back ribs, so I decided to give it a go. Friday morning, I remembered that there was a barbecue rib recipe in my new America’s Test Kitchen Slow Cooker Revolution cookbook and I knew it was going to be what I used. Like most good slow cooker recipes, this one does have a couple extra steps, but I loved that the extra steps were after the slow cooking, not before, because sometimes my cooking skills at 8 AM are not the sharpest. The original recipe is fairly large and should be made in a large oval slow cooker. Easy Barbecued Ribs In a small bowl, mix together paprika, brown sugar, cayenne and S&P. Now comes the only stove/oven work involved, we need to reduce the sauce and then brown the ribs under the broiler. Enjoy!

British Pork Recipes: Perfect Roast Pork Recipe Roast Pork is, like Roast Beef, an intrinsic part of a Sunday Roast, though there is no reason to not eat the meat any other day. A perfect roast pork should have lovely moist, evenly cooked meat surrounded by crisp, sharp crackling. The crackling can be either left on the meat of removed at the end of cooking and served separately. Garlicky Baked Fries I’m never going to make garlic potato fries any other way. These garlic fries, win hands down as the best garlic french fries I’ve ever made. Plus they are baked – so I won’t feel too guilty if I make it every time I’m craving for some potato comfort. When I read that there is garlic infused oil involved, my heart skipped a beat (in a good way, not the way oil would otherwise treat your heart). I got down to making them immediately.

Linguine with Garlicky Bread Crumbs With My Husband away on a business trip for a few days this week, I kept the cooking simple. Often letting the boys choose their dinner, thankfully, a vegetable was always chosen as part of the meal since they both have been learning about eating healthy foods. I don't always indulge my little men, but with Daddy away I thought I'd be extra nice to them - and, it doesn't hurt that their desires are simpler than what I normally make. I must admit that I am a pasta lover. Yes, in addition to my addiction to chocolate you can add pasta to that list.

Real Food - Fruity pork kebabs with chilli BBQ sauce Take each piece of fruit and wrap a bacon rasher around it. Then using metal skewers thread each of the pieces of fruit plus 2 cubes of meat onto each skewer. Brush with oil. Cinnamon Toast Rolls - Circle B Kitchen The USDA released its new food pyramid the other day (which is actually a plate now instead of a pyramid), and I am sorely disappointed to report that cinnamon rolls did not appear anywhere on that plate. I think by now most of us know what should be on our dinner plate in terms of healthy, well-rounded nutrient-laden meals, but it is my considered opinion that our breakfast plate should include cinnamon rolls now and then. And not just any cinnamon roll, mind you, but how ‘bout a homemade cinnamon roll hybrid that is a cross between a cinnamon roll and cinnamon toast, is super easy to make and gosh darn delicious. In honor of their ancestry, I call these little gems cinnamon toast rolls, and here’s all you need to make them… Yep.

Perfect Mac-n-Cheese « My Cooking Quest November 13, 2008 by joejhorn A few weeks ago I started a quest for some good mac and cheese. Nancy makes a killer mac-n-cheese but I wanted my own. I’m sure I frustrate the crap out of Nancy sometimes because I’m always looking for something better when it comes to food and recipes. Now mind you , this mac-n-cheese is not Bobby Flay mac-n-cheese with some crazy-sexy ingredients, but it is really, really good! Mediterranean Boneless Pork Chops with Summer Veggies Mediterranean Boneless Pork Chops with Summer Vegetables is made with thin sliced boneless pork chops topped with sauteed summer squash, roasted tomatoes, lemon juice, olives and Feta cheese. So much flavor and color in this dish! I love this summer dish!! It’s so flavorful and easy to make, and the best part, the servings are generous! If you don’t eat pork you can make this with chicken. If you have a spiralizer, you can use that instead of a mandolin to cut the zucchini and squash.

Naan Recipe: If You Can Make Pancakes, You Can Make Naan Naan is one of my favorite components of an Indian meal. Sometimes when I go to an Indian buffet, I’ll hit the buffet one last time for naan only so that it is the last flavor in my mouth when I walk out the door. What is Naan? Naan is an Indian bread that is similar to pita, but so much better (don’t even try to debate it with me)!

Garlicky Baked Fries I’m never going to make garlic potato fries any other way. These garlic fries, win hands down as the best garlic french fries I’ve ever made. Plus they are baked – so I won’t feel too guilty if I make it every time I’m craving for some potato comfort. Pork & Chorizo casserole in 20 minutes: Today Serve with rice, mash or boiled potatoes. Ingredients Serves: 6Preparation and cooking time: 20 minutes.