Vegan Substitutions Guide. If you’re new to vegan cooking you may be looking for substitutions you can use in your old non-vegan recipes. 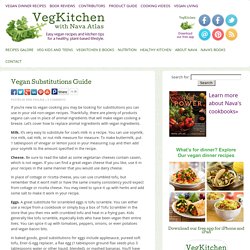 Thankfully, there are plenty of products vegans can use in place of animal ingredients that will make vegan cooking a breeze. Let’s cover how to replace animal ingredients with vegan ingredients. Milk. It’s very easy to substitute for cow’s milk in a recipe. Try the vegan 'chicken' that tastes like the real deal. Michelle Hainer Grilled pizza topped with broccoli, mozzarella and “chicken.” 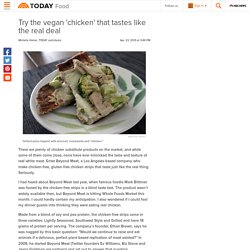 There are plenty of chicken substitute products on the market, and while some of them come close, none have ever mimicked the taste and texture of real white meat. Enter Beyond Meat, a Los Angeles-based company who make chicken-free, gluten-free chicken strips that taste just like the real thing. Seriously. I had heard about Beyond Meat last year, when famous foodie Mark Bittman was fooled by the chicken-free strips in a blind taste test. Made from a blend of soy and pea protein, the chicken-free strips come in three varieties: Lightly Seasoned, Southwest Style and Grilled and have 18 grams of protein per serving. When the chicken-free strips arrived, I was amazed at how close they were to real chicken in taste, texture and appearance.

"Chicken" with pasta and Swiss chard pesto In addition to the pizza, I used the chicken-free strips in quesadillas and in a pasta dish with Swiss chard pesto. 20 Meatless High Protein Foods (Vegetarian Protein Sources) We’ve ranked the best meatless high protein foods in terms of their protein content. 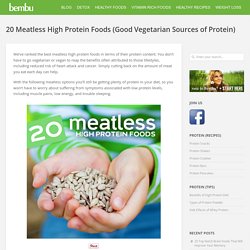 You don’t have to go vegetarian or vegan to reap the benefits often attributed to those lifestyles, including reduced risk of heart attack and cancer. Simply cutting back on the amount of meat you eat each day can help. With the following meatless options you’ll still be getting plenty of protein in your diet, so you won’t have to worry about suffering from symptoms associated with low protein levels, including muscle pains, low energy, and trouble sleeping. Here are the top 20 good sources of protein that aren’t meat, ranked in order from highest to lowest in protein per 100 grams. 1. Blowing away the competition is seitan, also known as wheat gluten, which is made up of 75% protein. Added features include it being low in sodium and carbohydrates, high in iron, and a good source of calcium. 2. If you’re not eating lentils on a regular basis, you may want to start. 3. 4. 5. 6. 7. 8.

Beyond Meat: Fake chicken that tastes so real it will freak you out. Photograph courtesy Beyond Meats The first time a vegetarian tastes Beyond Meat’s ersatz animal flesh, he’ll feel delighted and queasy at the same time. 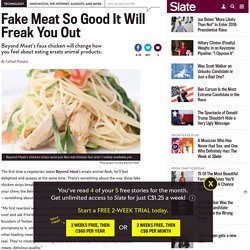 There’s something about the way these fake chicken strips break on your teeth, the way they initially resist and then yield to your chew, the faint fatty residue they leave on your palate and your tongue—something about the whole experience that feels a little too real. “My first reaction was, if I was given this in a restaurant, I’d get the waiter to come over and ask if he’d accidentally given us real chicken,” says Biz Stone, one of the founders of Twitter, who has been vegan for more than a decade. Finally, Fake Chicken Worth Eating. IT is pretty well established that animals are capable of suffering; we’ve come a long way since Descartes famously compared them to nonfeeling machines put on earth to serve man. 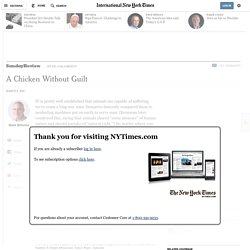 (Rousseau later countered this, saying that animals shared “some measure” of human nature and should partake of “natural right.”) No matter where you stand on this spectrum, you probably agree that it’s a noble goal to reduce the level of the suffering of animals raised for meat in industrial conditions. There are four ways to move toward fixing this. One, we can improve the animals’ living conditions; two (this is distasteful but would shock no one), we might see producers reduce or even eliminate animals’ consciousness, say, by removing the cerebral cortex, in effect converting them to a kind of vegetable (see Margaret Atwood’s horrifying description in her prescient “Oryx and Crake”); three, we can consume fewer industrially raised animals, concentrating on those raised more humanely.

Photo Indeed. Vegetarian Substitutes for Chicken. Whether for moral, health or dietary reasons, many people are searching out vegetarian substitutes for chicken. 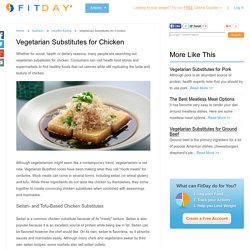 Consumers can visit health food stores and supermarkets to find healthy foods that cut calories while still replicating the taste and texture of chicken. Although vegetarianism might seem like a contemporary trend, vegetarianism is not new. Vegetarian Buddhist cooks have been making what they call "mock meats" for centuries. Mock meats can come in several forms, including seitan (or wheat gluten) and tofu. While these ingredients do not taste like chicken by themselves, they come together to create convincing chicken substitutes when combined with seasonings and marinades. Soy or other ground beef substitute? - Chowhound.

S Favorite Vegan Substitutes. 10 Vegetables That Can Substitute for Meat. How to Make (Almost) Any Recipe Meatless. If you’re a vegetarian that doesn’t eat meat substitutes, remaking meat-based recipes can be a little bit daunting. 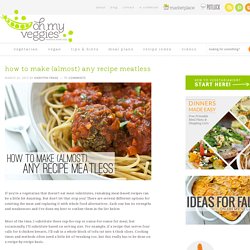 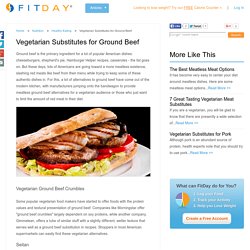 But these days, lots of Americans are going toward a more meatless existence, slashing red meats like beef from their menu while trying to keep some of these authentic dishes in. For this, a lot of alternatives to ground beef have come out of the modern kitchen, with manufacturers jumping onto the bandwagon to provide meatless ground beef alternatives for a vegetarian audience or those who just want to limit the amount of red meat in their diet. Vegetarian Ground Beef Crumbles Some popular vegetarian food makers have started to offer foods with the protein values and textural presentation of ground beef. Seitan The food known as "seitan" was originally a Japanese food - made from wheat gluten, seitan is in some ways like ground beef, and can be made more texturally similar by frying or by other means.

Textured Soy Proteins Tofu. Vegetarian Ground Beef Recipe. A growing number of people are adopting a vegetarian or vegan diet because of the health and environmental benefits that go along with them. 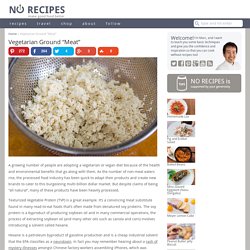 As the number of non-meat eaters rise, the processed food industry has been quick to adapt their products and create new brands to cater to this burgeoning multi-billion dollar market. But despite claims of being “all natural”, many of these products have been heavily processed. Texturized Vegetable Protein (TVP) is a great example. Global Search.