Meat, Fat and the Gut Microbiome 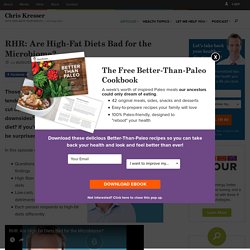 After all, when you cut out grains, you naturally cut out a lot of carbs. But are there downsides? What happens to our microbiome on a high-fat diet? If you’ve been following my work for a while, you won’t be surprised when I say, “It depends.” In this episode we discuss: How Fats Influence the Microbiome. “This paper, which had nicely controlled conditions, demonstrated that type of fat is really important for shaping microbial communities and their functional dynamics, which in turn impact our health,” said Vanessa Leone, a postdoc studying host-microbe interactions at the University of Chicago who was not involved in the study. 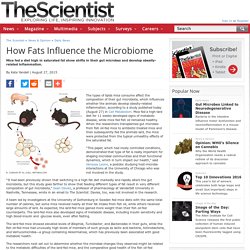 “It had been previously shown that switching to a high-fat diet markedly and rapidly alters the gut microbiota, but this study goes farther to show that feeding different types of fat result in very different composition of gut microbiota,” Sean Davies, a professor of pharmacology at Vanderbilt University in Nashville, Tennessee, wrote in an email to The Scientist. Davies, too, was not involved in the research. A team led by investigators at the University of Gothenburg in Sweden fed mice diets with the same total number of calories, but some mice received nearly all their fat intake from fish oil, while others received large amounts of lard. R. Lactobacillus vs. Oscillibacter! Does (Saturated) Fat Tip The Scale Towards Leaky Gut, Obesity & Visceral Inflammation? - SuppVersity: Nutrition and Exercise Science for Everyone.

Having tons of subcutaneous fat is certainly unaesthetic, but as science would have it, probably more healthy than a mediocre amount of superfluous visceral fat. 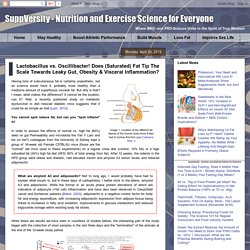 But why is that? I mean, what makes the difference? It cannot be the location, can it? Well, a recently published study on metabolic dysfunction in diet induced diabetic mice suggests that it could be as simple as that (Lam. 2012). Different types of dietary fat affect obesity through changes to the microbiome — The American Microbiome Institute. Dietary fat comes in many in many different forms, such as saturated fats that come from foods like lard, and polyunsaturated fats that come from foods like fish oil. 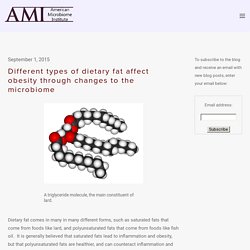 It is generally believed that saturated fats lead to inflammation and obesity, but that polyunsaturated fats are healthier, and can counteract inflammation and promote healthy metabolism. The role of the microbiome in mediating these effects is still unknown, but is beginning to be elucidated. Saturated Fat Kills Gut Bacteria & Modifies Genes in the Distal Small Intestine - Another Reason Why We Get Fat? Plus: Bacteria, Fiber, SCFA, GLP-1 & PYY Revisited - SuppVersity: Nutrition and Exercise Science for Everyone. I guess some of you have already noticed that I was (and probably am now, again) somewhat behind, as far as answering your questions, comments an wise remarks are concerned. 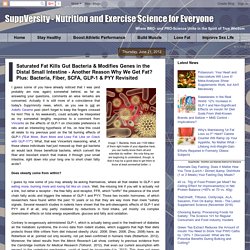 Actually it is still more of a coincidence that today's SuppVersity news, which, as you see is not an Adelfo Cerame post (don't forget to keep the fingers crossed for him! This is his weekend!) Short-Term Overfeeding with Dairy Cream Does Not Modify Gut Permeability, the Fecal Microbiota, or Glucose Metabolism in Young Healthy Men. Skip to Main Content Sign In Register Close. 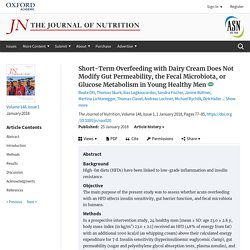 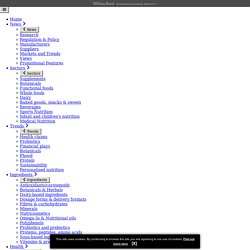 Led by Dr Ana Valdes from the University of Nottingham, the team found that women who had a higher intake of omega-3 and a higher omega-3 index had more diverse gut microbiome – which is associated with a number of health benefits, including lower risk of diabetes, obesity and inflammatory gut diseases like colitis or Crohn’s. “Our study is the largest to date to examine the relationship between omega-3 fatty acids and the composition of the gut microbiome,”​ said Valdes. Resistant Starch and Red Meat. The Paleo Community is once again backed into a corner, defending “meat.” 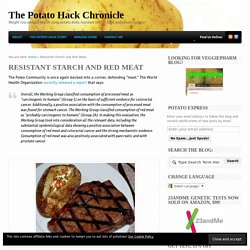 The World Health Organization recently released a report that says: Overall, the Working Group classified consumption of processed meat as “carcinogenic to humans” (Group 1) on the basis of sufficient evidence for colorectal cancer. Additionally, a positive association with the consumption of processed meat was found for stomach cancer. The Working Group classified consumption of red meat as “probably carcinogenic to humans” (Group 2A). Chowing Down On Meat, Dairy Alters Gut Bacteria A Lot, And Quickly. To figure out how diet influences the microbiome, scientists put volunteers on two extreme diets: one that included only meat, egg and cheese and one that contained only grains, vegetables and legumes. 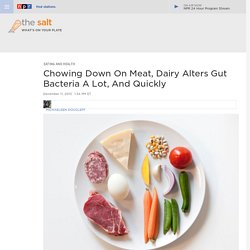 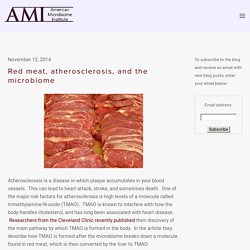 The researchers fed this molecule to germ free mice, mice on antibiotics, and control mice and discovered that those with a healthy microbiome produced high levels of TMAO. They proved a new pathway for this conversion, via an intermediate molecule called γ-Butyrobetaine, by detecting genes for its production. They then proved that γ-Butyrobetaine alone could be converted to trymethyl-amine (TMA) by the microbiome.

(TMA is the precursor to TMAO before being acted on by the liver.) Rarity of colon cancer in Africans is associated with low animal product consumption, not fiber. Microbiome and Meat: Let the Silly Season Begin. I’ve been meaning to get this one out of the way. As the microbiome and the importance of our gut microflora composition begins to get more attention, it will become, as all things do, subject to preconceived notions and biases about health. And perhaps nothing is as preconceived and biased in the world of diet and health as the idea that intake of meat and its associated saturated fat are inherently unhealthy.

Different diets can affect C. diff infection and survival — The American Microbiome Institute. We’ve covered the topic of Clostridium difficile infection extensively on this blog. We know that infection of this bacteria (CDI) can be nasty, sometimes even leading to death. A lot of research has been done to find ways to treat the effects of C. diff infection or to find out how the infection is acquired, but few papers have investigated dietary interventions to help treat CDI.