Too good to worry about meat or fat 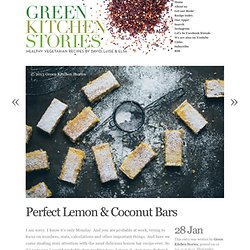 I know it’s only Monday. And you are probably at work, trying to focus on numbers, stats, calculations and other important things. And here we come stealing your attention with the most delicious lemon bar recipe ever. So if I were you I would probably stop reading now. I mean it, stop now. The thing is that we have always loved lemon pie and lemon bars, but when you try to make them healthier – without the flour, sugar and butter – you often loose all that is good and gooey about them.

Lemon-bar-traditionalists might be concerned with how we tweaked this recipe. A fair amount of people have been asking us about the backgrounds that we use in our photos. Lemon & Coconut BarsMakes around 40 pieces This is a quite big batch, you could easily half the recipe. Crust5 tbsp (75 g) coconut oil 3 tbsp maple syrup 2 cups/480 ml (200 g) shredded coconut (unsweetened)1 cup/240 ml (100 g) almond flour 1 pinch sea salt2 egg whites (save the yolks for the lemon curd)

Chocolate-hazelnut macaroon torte. When it comes to large family gatherings, no matter how much I humble-brag about my brisket, roasted vegetable sides or the way I know my way around a salad, I am always instead nominated to bring desserts. 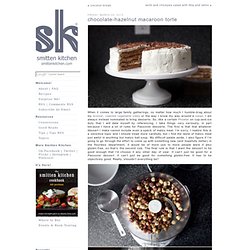 Rhubarb cream cheese hand pies. A few weeks ago, I retold the sad tale of the late rhubarb meringue tart that met its end when it slid off the plate and managed to coat nearly every part of the open fridge I’d intended to put it into with smears of curd, puffs of meringue and crust of crumbs. 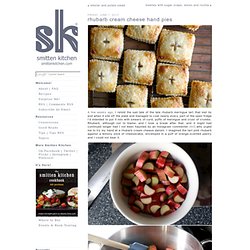 Rhubarb, although not to blame, and I took a break after that, and it might had continued longer had I not been haunted by an Instagram commenter (hi!) Who urged me to try my hand at a rhubarb cream cheese danish. I imagined the tart pink rhubarb against a lemony slick of cheesecake, enveloped in a puff of orange-scented pastry and I could not bear it. However, as I began researching danish dough, my interested waned.

I don’t think it will be a bad project for one day, but all of that envelope folding and yeast and butter and carefully timed steps seemed a bit much for six to eight folded pastries that wouldn’t survive beyond the breakfast meal. Roasted Pork Loin with Cardamom-Currant Jelly Sauce Recipe. Whole Wheat Blackberry Ricotta Scones Recipe. You might not think you need another scone recipe, but you do. 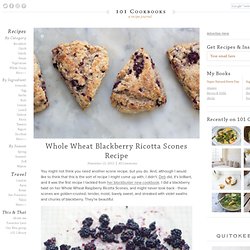 And, although I would like to think that this is the sort of recipe I might come up with, I didn't. Deb did, it's brilliant, and it was the first recipe I tackled from her blockbuster new cookbook. I did a blackberry twist on her Whole Wheat Raspberry Ricotta Scones, and might never look back - these scones are golden-crusted, tender, moist, barely sweet, and streaked with violet swaths and chunks of blackberry. They're beautiful. I feel like I've been waiting for Deb's book for-ev-er - in a good way. Pan-Grilled Pork Tenderloin with Pomegranate Molasses Recipe. Roasted pear and chocolate chunk scones. One of the saddest things you should probably know about me is that I’m a terrible host. 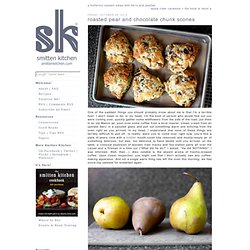 I don’t mean to be; in my head, I’m the kind of person who would find out you were coming over, quickly gather some wildflowers from the side of the road, put them in an old Mason jar, pour-over some coffee from a local roaster, steam cream from an upstate dairy in a spouted glass and pull out something warm and enticing from the oven right as you arrived. In my head, I understand that none of these things are terribly difficult to pull off. In reality, were you to come over right now, you’d find a plate of pears (one with a toddler mouth-sized bite removed) and mostly-empty jar of something delicious, but alas, too delicious to have lasted until you arrived, on the table, a colossal explosion of wooden train tracks and fire station parts all over the carpet and a fireman in a time out (“What did he do?” 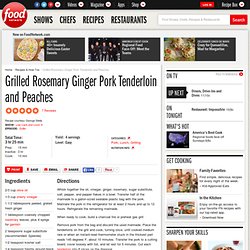 Transfer half of the marinade to a gallon-sized sealable plastic bag with the pork. Marinate the pork in the refrigerator for at least 2 hours and up to 12 hours. Refrigerate the remaining marinade. When ready to cook, build a charcoal fire or preheat gas grill Remove pork from the bag and discard the used marinade. Meanwhile, toss peach and tomato halves in a bowl with the unused reserved marinade. To serve, fan 3 radicchio lettuce leaves on each of 4 plates.