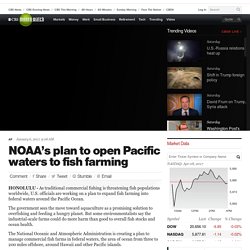 The government sees the move toward aquaculture as a promising solution to overfishing and feeding a hungry planet. But some environmentalists say the industrial-scale farms could do more harm than good to overall fish stocks and ocean health. The National Oceanic and Atmospheric Administration is creating a plan to manage commercial fish farms in federal waters, the area of ocean from three to 200 miles offshore, around Hawaii and other Pacific islands. Fish Farms of the Future? The Other Other White Meat: Farmed Fish. Brian O’Hanlon has asked to leave the doors off our helicopter. 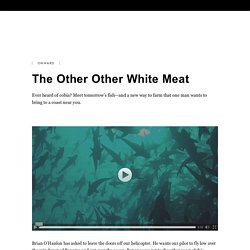 He wants our pilot to fly low over the rain forest of Panama and out over the ocean. But once we get to the other coast of this country that seems barely wider than someone’s finger, the pilot is nearly lost. He turns around, terrifyingly, and asks through our headsets where he should go next. O’Hanlon is sitting in the backseat and keeps saying the same thing while jutting his arm forward.

“Todo derecho,” he says, in Spanish. Even in the air, O’Hanlon knows the way by heart to a farm that he built from nothing, out in the middle of nowhere. Below us happens to be the largest open-ocean fish farm in the world. O’Hanlon’s farm, which is part of a company he founded called Open Blue, wants to buck 4,000 years of human innovation and farm fish back in the ocean. Panama might seem a strange place to hatch a global idea.

The American Heart Association recommends that we eat fish at least twice a week, since fish are high in protein, low in saturated fats and rich in omega-3 fatty acids. 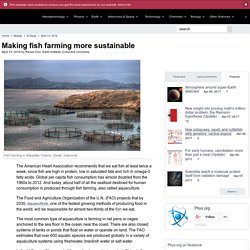 Global per capita fish consumption has almost doubled from the 1960s to 2012. And today, about half of all the seafood destined for human consumption is produced through fish farming, also called aquaculture. The Food and Agriculture Organization of the U.N. (FAO) projects that by 2030, aquaculture, one of the fastest growing methods of producing food in the world, will be responsible for almost two-thirds of the fish we eat. The most common type of aquaculture is farming in net pens or cages anchored to the sea floor in the ocean near the coast.

In the U.S., over 91 percent of the seafood we eat is imported. While fish are known for their omega-3 fatty acid benefits, they do not actually produce omega-3s themselves. This is one reason that aquaculture has a reputation as being unsustainable. New Kinds of Feed. Overfishing. Fishing is one of the most significant drivers of declines in ocean wildlife populations. 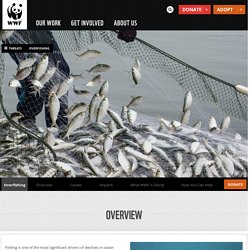 Ecosystem services. Biodiversity. What is biodiversity and why is it important? What Is Biodiversity? Why is biodiversity so important? - Kim Preshoff. 10 Fascinating Fish Facts from World Without Fish - Workman Publishing. 10 FASCINATING FACTS FROM MARK KURLANSKY’S WORLD WITHOUT FISHComing in April 2011–click here to learn more 1. 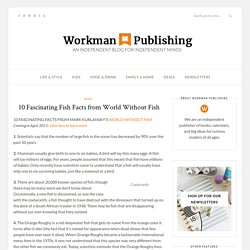 Scientists say that the number of large fish in the ocean has decreased by 90% over the past 50 years. 2. Mammals usually give birth to one to six babies. A bird will lay this many eggs. Coelecanth 3. 4. 5. Patagonian Toothfish 6. 7. 8. 9. 10. About Workman Publishing We are an independent publisher of books, calendars, and big ideas for curious readers of all ages. A World Without Fish Analysis - Home.