Big Data: why is metadata more personal than our fingerprints 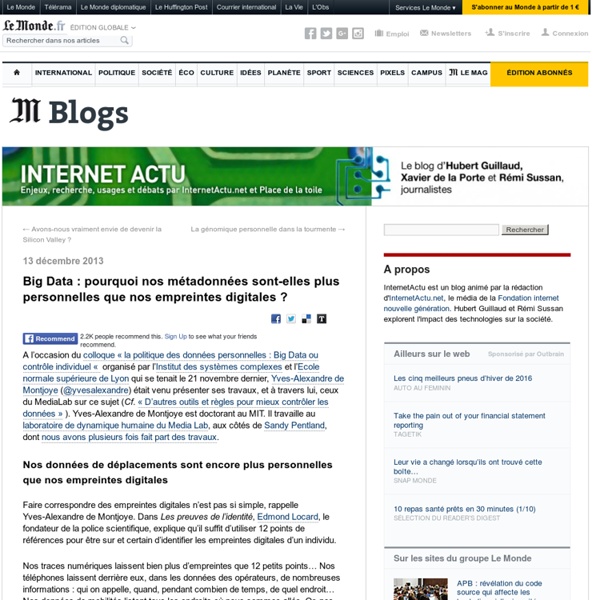 Visual Literacy: An E-Learning Tutorial on Visualization for Communication, Engineering and Business Visual Cards for Collaboration and Team Creativity Making the Complex Clear Visual Literacy for Managers - How Sketching enables Visual Problem Solving and Communication (get the hardcopy edition at sketchingatwork.com) By clicking on a map or diagram thumbnail below, you can access an interactive graphic overview on tools, books, researchers in different visualization fields, as well as on key success factors of visualization. There is also an interactive organizing table that shows (incl. examples) one hundred visualization-based methods. Clicking on a particular tool, book, person, document, principle or method within a map opens the respective website or homepage in a new browser window or reveals an example (most maps were created with lets-focus).

This is what happens when you bait Matt Cutts into an attack As a prologue, this post is about discovering the true depths that Google will go to, about learning how their current capabilities and the reach Google spam team have currently. Having Matt Cutts target me directly, we got an insight into just how far the Google spam team will go once you’re targeted. Later in the post I look at ways to protect our sites from an attack in the future and remain anonymous, these are things we will have to adapt to as Google becomes more aggressive.Click here to discuss this post.

Tools - Cool Infographics Adioma creates information graphics out of your textual data, using timelines, grids and icons. Create impressive charts from spreadsheets. Assemble into dashboards, embed in websites, or simply share a link. A Python interactive visualization library that targets modern web browsers for presentation Cacoo is a free online drawing tool that allows you to create a variety of diagrams such as site map, flowchart, mind map, wire frame, UML diagram and network diagram. Enduring Sharedom "The most radical revolutionary will become a conservative the day after the revolution." —Hannah Arendt The revelations by the whistleblower Edward Snowden that the NSA (National Security Agency) is engaged in mass surveillance of private online communications between individuals by obtaining data from "internet corporations" such as Google, Facebook and Microsoft as part of a covert program called PRISM have resulted in widespread outrage and shock. The outrage is understandable, because such forms of surveillance constitute a major invasion of our privacy. The shock, on the other hand, is somewhat puzzling.

Pattern recognition Pattern recognition algorithms generally aim to provide a reasonable answer for all possible inputs and to perform "most likely" matching of the inputs, taking into account their statistical variation. This is opposed to pattern matching algorithms, which look for exact matches in the input with pre-existing patterns. A common example of a pattern-matching algorithm is regular expression matching, which looks for patterns of a given sort in textual data and is included in the search capabilities of many text editors and word processors. In contrast to pattern recognition, pattern matching is generally not considered a type of machine learning, although pattern-matching algorithms (especially with fairly general, carefully tailored patterns) can sometimes succeed in providing similar-quality output to the sort provided by pattern-recognition algorithms. Overview[edit]

Semantic SEO: Making the Shift from Strings to Things Semantic SEO is the nascent art of optimizing web sites and other web-based resources for semantic search. But, strictly speaking, it's unnecessary to speak of "semantic SEO" or "semantic search" because the reality of contemporary search engines have made the qualifier redundant. Semantic web technologies are now intrinsic to the way modern search engines work, and organic search marketing strategies need to address this reality. This is a version of a talk I gave at SMX East in New York City on 2 October, 2013, under the slightly different title "Strategic Semantic SEO". I think that the subject Mike, Jon and I will be addressing today is a vitally important one for SEO.

How To Tell Search Engines What "Entities" Are On Your Web Pages Search engines have increasingly been incorporating elements of semantic search to improve some aspect of the search experience — for example, using schema.org markup to create enhanced displays in SERPs (as in Google’s rich snippets). Elements of semantic search are now present at almost all stages of the search process, and the Semantic Web has played a key role. Read on for more detail and to learn how to take advantage of this opportunity to make your web pages more visible in this evolution of search. How Google Does Fundamental Research Without a Separate Research Lab Research vice presidents at some computing giants, such as Microsoft and IBM, rule over divisions housed in dedicated facilities carefully insulated from the rat race of the main businesses. In contrast, Google’s research boss, Alfred Spector, has a small core team and no department or building to call his own. He spends most of his time roaming the open plan, novelty strewn offices of Google’s product divisions, where the vast majority of its fundamental research takes place.