Get supported by your Community. 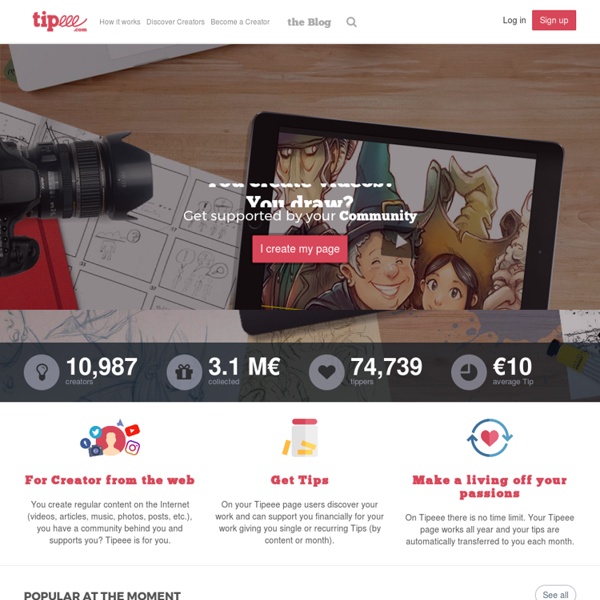 Smartphone Projector Ever wanted to project your favourite movie onto the wall while you’re snuggled up in bed using just your phone? Or thought it would be cool to show your mates funny fail videos but sometimes there’s just too many of them to crowd around a small screen? Smartphone Projector has been designed by Luckies of London to create intimate screenings any time, any place. Whether you want to set up visuals for a house party or simply watch music videos with your friends, Smartphone Projector is the answer.

Leetchi.com - group gifts and events, online money pots Create a money pot (for free) Share your money pot and collect contributions Ask your friends to contribute and keep track of your money pot with your computer, smartphone or tablet. Buy exactly what you want Give the money directly to the lucky recipient and let them decide how to spend it. Find out more Watch celebrities become hideously ugly as strange 'flashed face' video effect works its horrible magic By Rob Waugh Published: 17:13 GMT, 22 May 2012 | Updated: 18:22 GMT, 22 May 2012 Liv Tyler's face warps into the image of hideous old crone, and Tom Cruise's chin distorts beyond all recognition. No, it isn't a vision of the future - it's a strange effect achieved by looking at a space 'between' flashing pictures of human faces.

Latest News Joe Paterno, the man who for decades was synonymous with Penn State football and was known by the college football world as just "JoePa", has died. Paterno, 85, had been receiving chemotherapy as part of his treatment for lung cancer, and complications from that treatment claimed the longtime Penn State coach's life on Saturday. Paterno was the head coach of Penn State for 46 seasons before being fired in November as his role in the Jerry Sandusky child sex abuse scandal came under greater scrutiny. Combined with the time he spent as an assistant, Paterno spent a total of 61 years on the Penn State sidelines.