Form Us With Love 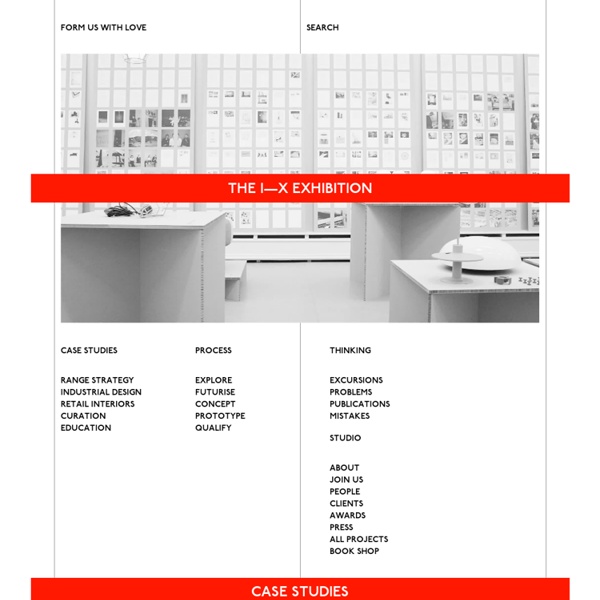 ◁ Back 10 April 2014 Form Us With Love curates Swedish Design Goes Milan 2014 - IN REAL LIFE This year Form Us With Love is proud to have curated the Swedish Pavilion during Salone del Mobile in Milan in April 8-13. Swedish design studio Form Us With Love has created a joint show and meeting place for the annual pavilion, this year named IN REAL LIFE – a connective presentation of Swedish designers and companies entering the classic Art Nouveau palace – La Postina, in the Brera district, a platform for design and face-to-face conversations. A long table with 24 selected chairs are at the centre of the IN REAL LIFE exhibition, all of which represent a unique relationship between producers and designers.

Michael Anastassiades Michael Anastassiades Burger tip of the tongue, 2013 get set, 2013 OCEAN PLAZA - Projects - Guallart Architects Taiwan 2003 Local partner: J.M.Lin The Observer Design Group 1st prize international competition How Do You Build a Rock? The project for the artificial rocks in Taiwan grew out of two traditions: on the one hand that of the Japanese Zen garden in which various natural rocks are surrounded by an expanse of raked gravel in such a way that both their form and their position generate tension; on the other, that of the large expanses of timber decking that are found in ports around the world, on which people can relax by the sea. In the Ocean Plaza in Batoutz we decided to create a garden of artificial rocks made of timber, modelled on the volcanic rocks that ring the port.

In the Raw: The Strange Beauty of Plywood Previous image Next image Traditionally used as a substrate (read: a building material that goes under other things), plywood is slowly starting to come out in the open. Because the veneers that make up a sheet of plywood are created by rotating a log around its long axis to draw out long, thin layers of wood, plywood often has a beautiful grain that repeats over and over.

Villa 1 — Powerhouse Company Rooms with many views Villa 1 was Powerhouse Company’s first project: our chance to present our manifesto to the world. We were a fledgling practice then, working from kitchen-table offices in Rotterdam and Copenhagen. But we knew exactly what we wanted to build (a house with great spatial qualities and meticulous detailing) and how we wanted to build it (in a smooth, service-driven process). The design of Villa 1 was inspired by the site, the clients’ paradoxical desire to live “in a modern glass house with all the cosiness of an old farmhouse”, and by Mies van der Rohe’s Farnsworth House and the work of Saarinen.

Street View, Then & Now: New York City's Fifth Avenue With this public domain remix, you can compare the photos from the 1911 Fifth Avenue from Start to Finish collection with 2015's Google Street View. Use your keyboard's arrow keys, click on the markers on the map, or use the controls on the screen to move up and down Fifth Avenue. This website works best with Chrome or Safari. From The New York Public Library Digital Collections: Fifth Avenue, the street that became the social and cultural spine of New York's elite, first appeared on the Commissioners' Map of 1811. meguro office nendo’s office is located near the Meguro River in Tokyo, on the fifth floor of an old office building. We wanted the usual spaces and functions -meeting space, management, workspace and storage- to be separate, but also to maintain a sense of connection between them. To achieve this effect, we divided the space with walls that seem to sag and flop like a piece of cloth held up between two hands, enclosing the various spaces more than the usual office dividers, but less than actual walls. Employees can move between spaces by walking over the parts of the walls that “sag” the most, thus emphasizing the contrast between the uses of the different spaces. Spaces that need more sound-proofing are enclosed with the kind of plastic curtains you might find at a small factory so that people can work without worrying about noise but not feel isolated.

david shrigley lines sketch restaurant's pink walls with 239 original drawings jun 11, 2014 david shrigley lines sketch restaurant's pink walls with 239 original drawings david shrigley lines sketch restaurant’s pink walls with 239 original drawings all images courtesy of david shrigley LUUM — Contemporary lighting design Flame Pollen Bangle Temple Emanu-El Temple Emanu-el project is located at one of the most active areas of in the Dallas Metropolitan area. As one of the first Reform Jewish congregation in North Texas and the largest synagogue in the South, the Temple Emanu-el has had a significant historical, cultural and social presence in the community. In 1957 the temple moved to its present location in north Dallas. The noted Architects Howard R. Meyer and Max M. Sandfield, with noted California architect William Wurster as consultant, received an Award of Merit from the American Institute of Architects for the design of the present structure.

LA Modern to Auction Off Ettore Sottsass Designs Architect and industrial designer Ettore Sottsass may not be a household name, but recent retrospectives at LACMA and London's Design Museum have broadened the audience for his office equipment, furniture and ceramics. One fan of his work was computer pioneer, movie producer and art collector Max Palevsky. While Sottsass' early career was spent working for clients such as Fiorucci, Esprit, the Italian furniture company Poltonova, Knoll International, Alessi and the city of Turin (designing its street furniture), it was in the early 1980s that Sottsaas founded the Memphis Group.