All The World's A Stage

Disney’s Newsies: The Broadway Musical Sets Theatrical Release Dates. The live film of Disney’s hit musical Newsies, which was shot onstage in Los Angeles last September, will be released in cinemas across the U.S. 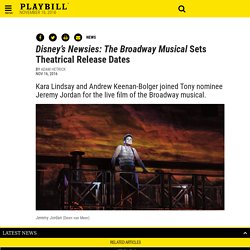 February, 16, 18, and 22, 2017. Billed as Disney’s Newsies: The Broadway Musical, the film runs two hours and 25 minutes. Fathom Events is presenting the cinema release of the film that was shot in front of a live audience. Members of the original Broadway cast reunited for the film, including Tony nominee Jeremy Jordan as rebellious paperboy Jack Kelly, Kara Lindsay as Katherine, Ben Fankhauser as Davey, and Andrew Keenan-Bolger as Crutchie. They are joined by members of the North American tour, including Steve Blanchard as Joseph Pulitzer and Aisha de Haas as Medda Larkin. New Comic Book The Backstagers About High School Stage Crew. American comic book and graphic novel publisher Boom! 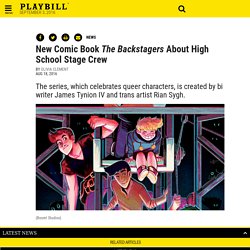 Studios has released a new series called The Backstagers, about the adventures of a high school stage crew. According to Boom! Studios, the new series is billed as “an incredible yet earnest story” about a group of outcasts who find a place to fit in. The story’s central character, Jory, joins the stage crew at his new high school, and discovers an entire world backstage. The creators, bi writer James Tynion IV and trans artist Rian Sygh, spoke to The Advocate about their mission to celebrate queer, gay, bi and trans characters. 'She Loves Me' Becomes First Broadway Show to Stream Live Online. For the first time ever, a Broadway show will be live streamed online. 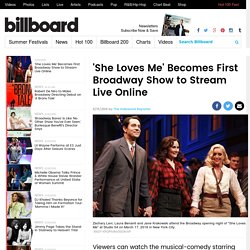 Who will play King George? 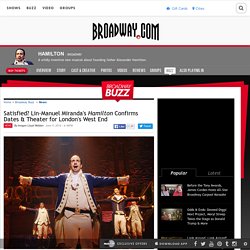 We told you so! Hamilton will reopen Cameron Mackintosh's renovated Victoria Palace Theatre in London. The massive Broadway hit, nominated for a record-breaking 16 Tony Awards, will open in the West End in October 2017, reports U.K. journalist Baz Bamigboye. Harry Potter and the Cursed Child cast photos released. Image copyright Charlie Gray The first set of photographs featuring some cast members of Harry Potter and the Cursed Child in costume has been released. 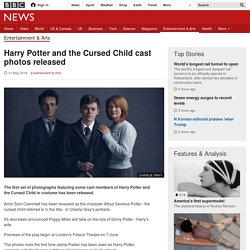 Actor Sam Clemmett has been revealed as the character Albus Severus Potter - the cursed child referred to in the title - in Charlie Gray's portraits. It's also been announced Poppy Miller will take on the role of Ginny Potter - Harry's wife. Previews of the play begin at London's Palace Theatre on 7 June. The photos mark the first time Jamie Parker has been seen as Harry Potter, complete with the famous lightning-shaped scar on his forehead. When asked about Parker's transformation, author JK Rowling said: "He simply is Harry now.

‘Anastasia’ Musical Confirms Broadway Intentions. Moviestore/REX/Shutterstock “Anastasia,” the new musical inspired by 20th Century Fox’s 1997 animated film, has made its Broadway intentions plain, with producers announcing a plan to arrive in New York during the 2016-17 season at a Shubert Organization theater. 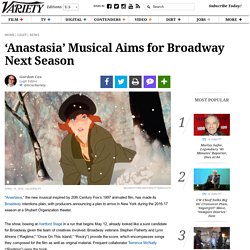 The show, bowing at Hartford Stage in a run that begins May 12, already looked like a sure candidate for Broadway given the team of creatives involved. Broadway veterans Stephen Flaherty and Lynn Ahrens (“Ragtime,” “Once On This Island,” “Rocky”) provide the score, which encompasses songs they composed for the film as well as original material. Frequent collaborator Terrence McNally (“Ragtime”) pens the book. 60 Minutes - The Making of the Hamilton Cast Album. Hamilton - 60 Minutes Videos. 22 'Hamilton' Lyrics, Explained. At the end of 1799, a young Quaker woman named Elma Sands disappeared; her body was found in a well less than two weeks later (in 1800). 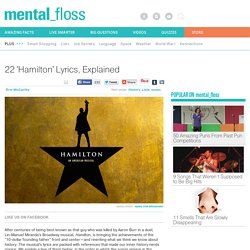 Levi Weeks, a carpenter and boarder at Sands’s cousin’s boarding house, was accused of killing her. Burr and Hamilton—at that point already enemies—teamed up to defend him, along with another lawyer named Brockholst Livingston. Exclusive Video: Jeremy Jordan, Andrew Rannells, Ben Platt & More Broadway Boys Are Miscast for MCC. Check out these exclusive videos from 'Miscast'! 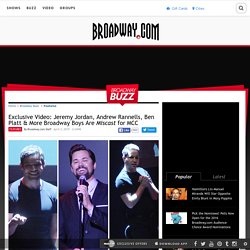 MCC Theater gathered a stageful of popular stars for its annual Miscast benefit on March 30, which allows Broadway's best and brightest to perform songs that are completely inappropriate for them. In these two exclusive clips, some of your favorite stage hunks belt out numbers usually reserved for the ladies. Darren Criss to Star in ‘Hedwig and the Angry Inch’ on Broadway. Joe Scarnici/Getty Images Darren Criss will return to Broadway in “Hedwig and the Angry Inch,” stepping into the title role after John Cameron Mitchell, the musical’s co-creator and its original star, rotates out of the production in late April. 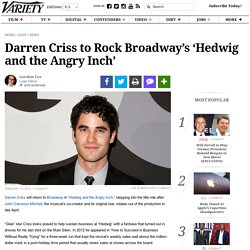 “Glee” star Criss looks poised to help sustain business at “Hedwig” with a fanbase that turned out in droves for his last stint on the Main Stem. In 2012 he appeared in “How to Succeed in Business Without Really Trying” for a three-week run that kept the revival’s weekly sales well above the million-dollar mark in a post-holiday time period that usually slows sales at shows across the board. Neil Patrick Harris launched the Broadway revival of “Hedwig” with a Tony-winning turn that was followed by Andrew Rannells, Michael C. Hall and Mitchell. Criss stars in “Hedwig” for a 12-week run that starts April 29 and stretches into the summertime months, when New York City tourism keeps Broadway sales robust. 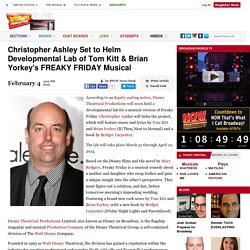 Christopher Ashley will helm the project, which will feature music and lyrics by Tom Kitt and Brian Yorkey (If/Then, Next to Normal) and a book by Bridget Carpenter. The lab will take place March 31 through April 10, 2015. ‘Smash’ Musical ‘Bombshell’ on Broadway — Megan Hilty Stars. Let me (briefly) be your star! “Bombshell,” the musical at the heart of Smash Season 1, is heading to Broadway – for one night only. Per BroadwayWorld.com, The Actors Fund has confirmed that Craig Zadan and Neil Meron will produce a benefit performance of the Marilyn Monroe-centric opus on June 15, 2015. VIDEOSVideo: Debra Messing’s Philosophical Take on Smash — ‘It Had Its Moment’ 'Water for Elephants' Musical Eyes Broadway. 10:56 AM PST 1/26/2015 by Ashley Lee Ashley Lee What would Water for Elephants sound like as a musical?

Producers Peter Schneider and Elisabetta di Mambro, in association with Broadway Across America and Mehr! Entertainment, announced Monday that they've acquired the worldwide rights to adapt Sara Gruen's best-selling 2006 novel as a musical. The Depression-era novel, which has been published in 43 countries and has sold more than 10 million copies worldwide, follows aspiring veterinarian Jacob Jankowski as he joins the staff of Benzini Brothers Most Spectacular Show on Earth, working with the circus' new elephant. He bonds with the show's equestrian star, who is married to its charismatic but troubled animal superintendent. The love-triangle title was previously adapted into a 2011 film starring Reese Witherspoon, Robert Pattinson and Christoph Waltz. WEST END RECAST 2 to Return Nov 9 at the Phoenix Theatre. West End Recast 2 - It's back... it's bigger... it's better! On Sunday 9th November, 7:30pm, at the Phoenix Theatre. The Fans Have Spoken! Broadway.com Readers Choose the 10 Must-See Performances on Broadway Right Now.

Readers rank the top ten must-see performances on Broadway! Visiting New York City and have no idea which Broadway musical to see? We’ve got you covered! Last week, we asked theater fans an incredibly tough question on Culturalist: Of all the stellar stars on the Great White Way, which are the top ten must-see performances? Hundreds of fans cast their votes, and the results are in! ‘Strange Magic’: Lucasfilm musical based on ‘Midsummer Night’s Dream’ Nov. 11, 2014 | 10:36 a.m. Bog King (Alan Cumming), Griselda (Maya Rudolph) and Marianne (Evan Rachel Wood) are part of a colorful cast of goblins, elves, fairies and imps in “Strange Magic.” (Lucasfilm) “Strange Magic,” a musical animated feature film inspired by William Shakespeare’s “A Midsummer Night’s Dream,” is coming to theaters in January, Disney announced Tuesday.