The Biomechanics Of Usain Bolt 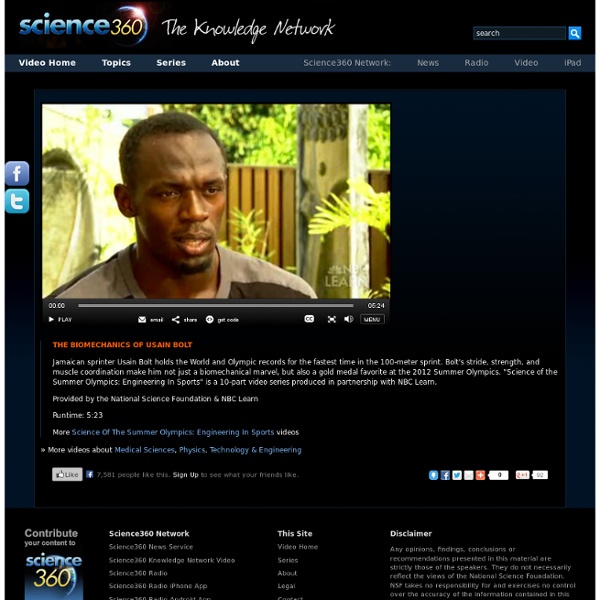 Used by medical universities Comparing Vastly Different Body Types of Olympic Athletes New York-based photographer Howard Schatz captures the diverse range of body types of Olympic athletes. Referring to a body as an athletic build is often thought to be a perfect, rippling mass of muscle boasting a six pack, but Schatz's series reveals the wide variety of heights, widths, body shapes, and muscle mass that make up the physiques of champion athletes across an array of Olympic sports. Tall, short, heavy and light, Schatz's series clearly displays the broad spectrum of sizes and shapes that these disciplined jocks come in. Dependent on their field of athletics, their bodies are in peak condition, despite looking so different from one another. While long-distance running athletes are typically lean, this physical feature is undesirable for a weightlifter or wrestler who relies on more muscle and weight to win their respective titles. Just as long legs are preferred for a sprinter, it's a long torso that works to the advantage of a swimmer.

How does Usain Bolt run so fast? Usain Bolt showed his dominance of men's sprinting at the athletics World Championship in Beijing this week with wins in the 100m and 200m. What's his secret? Is the way to win at sprinting to move your legs faster than your rivals do? Since the Beijing Olympics in 2008 Bolt has won every race he's entered at a World Championship or the Olympics, with the exception of one, where he was disqualified for making a false start. When non-athletes want to run fast they set about moving their legs as fast as they can, so you might assume that Bolt has achieved this exceptional record by making his legs move faster than everyone else has. "Elite sprinters don't swing their legs any faster than recreational runners," says Dr Sam Allen of Loughborough University. Instead, the difference is that a top sprinter takes longer and more powerful strides. Research shows that an amateur runner often takes between 50 and 55 steps to complete 100m, while an elite sprinter takes in the region of 45.

The Physics of Olympic Bodies Yes, it is that time of the season that the olympics are ending. Being one of the most fascinating events to observe around the world, the Olympics is able to capture the imaginations of countries around the world. Though sometimes due to, in no small part, how freaking buff these people are. Every historical trend in world record performances has been positive, meaning that we (a very subjective word) as Olympians have only been getting harder/better/faster/stronger every year! It boggles the mind to think that every year someone one-ups the past by just enough to progress the world record. What I find even more fascinating though, is how each event in the Olympic event defines the physique of the athlete in question. ps sorry for the double-day-Olympics-Whammy Share This Infographic Get Free Infographics Delivered to your Inbox

What does it mean to have an athletic body? | Fit and Feminist Autumn over at The Beheld wrote a post yesterday entitled “On Athletic Bodies,” and I found it very thought-provoking. Here’s the meat of her post (although I think you should read the whole thing anyway, and in fact, you should probably just go ahead and put her blog into your RSS reader while you’re at it): So the first time I saw “athletic body” in the “dress your figure” pages of a women’s magazine, I got excited. The whole post is just a heaping pile of awesome, and I really suggest you go read it. I went and checked out one of the links Autumn referenced, in which a blogger provides suggestions for women with “athletic” figures. The blogger starts off with: With broader shoulders, a phenomenal build and toned arms and legs, you’ve got a lot to show off! But then the blogger suggests you don’t actually show off your body: We recommend steering clear of cap-sleeves, high neck tanks and loose-sleeved dresses that add “bulk” to the upper body. Like this: Like Loading...

Muscular System: Facts, Functions & Diseases While most people associate muscles with strength, they do more than assist in lifting heavy objects. The 650 muscles in the body not only support movement — controlling walking, talking, sitting, standing, eating and other daily functions that people consciously perform — but also help to maintain posture and circulate blood and other substances throughout the body, among other functions. Muscles are often associated with activities of the legs, arms and other appendages, but muscles also produce more subtle movements, such as facial expressions, eye movements and respiration, according to the National Institutes of Health (NIH). [Image Gallery: The BioDigital Human] Prehistoric Van Goghs: Artists Used Pointillism 38,000 Years Ago Nineteenth-century artists, such as Georges Seurat and Vincent van Gogh, weren't the first to use pointillism, according to a discovery of 38,000-year-old decorated limestone tablets in France. Muscles also can be identified by their function.

Don't believe the hype, teens are drinking less than they used to Ask your friends and colleagues about young Australians and alcohol and I bet they’ll say something about a generation out of control or a binge-drinking epidemic. The media regularly brings the worst outcomes of young people’s drinking to our attention and points to a problematic drinking culture supposedly unique to young Australians. Little wonder people believe things have never been so bad. The reality is startlingly different. According to the National Drug Strategy Household Survey, the proportion of 12- to 15-year-olds who reported any drinking in the past year halved, from 35% in 2004 to 18% in 2013. In case you think there must be something wrong with this survey, results from the Australian Secondary Students Alcohol and Drug Survey show similar trends. Rates of heavy drinking have fallen as well. Remarkably, these trends seem to be part of a global shift. Somewhat surprisingly, little attention has been paid to these trends or the reasons behind them.

Education resources The AIHW releases around 150 publications every year. Permission for use has been granted under the Creative Commons Licensing, provided AIHW acknowledgment is given. Latest worksheets and presentations (from Australia's health 2016) iPhone/iPad Apps Search in the App store the following Apps: OzHealth app - key facts and figures from the Australia's health 2016 reportOzWelfare app - key facts and figures from the Australia's welfare 2015 report Indigenous health and welfare statistics app—key facts and figures from the The health and welfare of Australia’s Aboriginal and Torres Strait Islander peoples: 2015 Are you an Android user? Presentations Designed for classroom use and/or inserting into your own presentations. Videos What is burden of disease? Quizzes See below for Quiz answers. Infographics, posters and report profiles Infographics present complex information in a way that is visually stimulating and easily understandable. Resources by subject area Children and youth Disease Drugs Health Injury